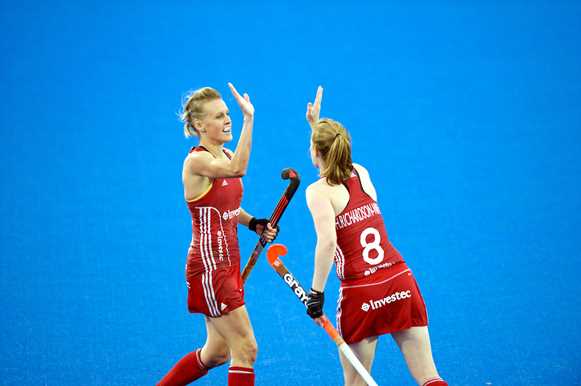 Danson demonstrates power of the mind

When Great Britain women take on the Netherlands in the next set of FIH Hockey Pro League matches on 27 and 29 October, one former member of the Great Britain squad will be hooked to the match watching as the action unfolds.

“It is crazy how much I am looking forward to watching live international hockey again,” says Alex Danson, who for more than 18 years was a lynchpin of the England and Great Britain forward line.

Danson’s departure from the international hockey scene is well documented. A fourth head injury, the final one sustained away from the hockey pitch, left her a shell of her former self, physically and mentally. In the first few weeks and months following the injury she was unable to walk from one room to the next. Nearly two years on and she still suffers headaches on a daily basis. A recent slight knock to the head sent her into a spiral of physical and psychological reactions.

But this is not a tale of woe but rather one of hope, positivity and the power of both body and, more importantly mind.

When people meet Danson now, there will often be a sympathetic word. “We are so sorry...” Danson will cut them off, sometimes she admits, “too forcefully”.

What Danson has navigated her way towards is a complete acceptance of the cards she has been dealt. From conversation, you know that she has been supported in this by the bedrock that is her husband – also Alex. But much of this has come from the Olympian’s own resilience.

“In terms of retirement from the game, I had already found peace with that decision if I’m honest. I kind of knew that it wouldn’t be sensible to play again, given this was my fourth head injury. I had gone through a time in the first two or three months where I was so poorly but I was still thinking that I need to get back to training and back to the team. But as my health didn’t improve, so my mindset changed. I was almost saying to myself, ‘I’ll take not playing hockey again, if I can just get well again’. So I went through that process slowly. By the time it came to retirement I had done the tough part – not being part of the group, not having my health, not playing the sport I loved, not being part of the team.

“And I wanted to make sure my retirement was framed in a really positive way because I have had the most amazing career. I had travelled the world, met some amazing people and had more success than I could ever have dreamed of, so my career was amazing. It was unfortunate how it ended, but I knew I could retire peacefully.”

And in a sentence that should be included in every person’s life manual, she adds: “If you don’t end something well, it can eat into the next part of your life for a very long time, so I worked hard at making sure I ended things with my international career well.”

Since the accident, Danson got married and is pregnant with the couple's first child. She has a coaching role at Wimbledon Hockey Club who play in the first tier of the England Hockey League. She says: “I used to live life at a crazy pace and I didn’t stop, and I now choose not to live that life anymore. Health and family time is my priority now.”

There is of course, always a source of perspective and, in Danson’s case, it was her sister Claire.

Claire had been an age group GB triathlete when she suffered a life-changing accident that left her initially hanging onto life by a thread and then paralysed from the waist down.

“The change Clare has suffered over the past year has definitely made me absolutely rethink the way I view life,” says Danson.

For people who are looking at Danson’s story there are lessons to be learnt that everyone can follow.

“If you are facing a problem or a challenge, then break it down into small chunks, don’t try and solve it all in one go,” says Danson. “It is all about celebrating small wins. When I had my head injury I was desperate to get back to hockey. But that was patently not available. At that time I couldn’t even walk to the bathroom.

“It is about really breaking things down and understanding that progress is amazing but it doesn’t need to be enormous. I fought it at first. I was used to the high performance environment and couldn’t see small things that counted as progress. When I started to get better was when I started to take joy in walking to the end of the garden or having a cup of coffee with someone for 15 minutes. The connection between how you think and how you feel is enormous. That was highlighted to me but it is true to life generally.”

And much to her own surprise, Danson says she has turned into a hockey geek. She says: “I really love watching hockey. I am intrigued by what will happen in these matches against the Netherlands. Any time you play Holland, it won’t be an easy game. They have talent in abundance. But what we have is a very unique programme where we develop excellent combinations. In many respects these early FIH Hockey Pro League games will be more open because of the impact of Covid. I am intrigued by these matches.”

As an addendum to Claire Danson’s story, a year on and she is pursuing a career as a para-athlete.

Although the fans will not be allowed into the stadium itself, all four matches will be available to watch via television or digital streaming, as well as on the new Watch.Hockey app in every country where a rights holding broadcaster is not showing the matches live.