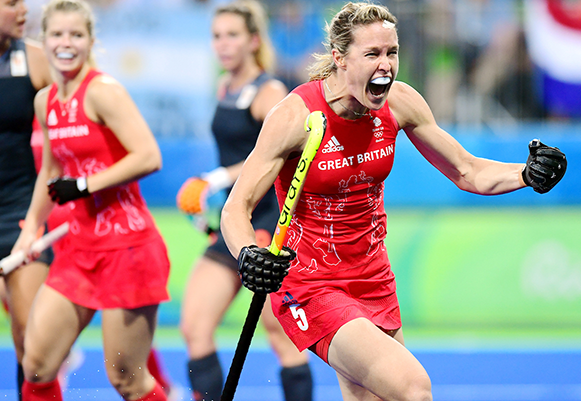 As we continue our series of feature stories marking the original event dates of Tokyo 2020, we speak to Great Britain’s Olympic gold medal-winning defender Crista Cullen, a player who made a remarkable comeback to international hockey for what proved to be a glorious Rio 2016 competition after hanging up her stick following bronze at London 2012.

Cullen – who won 197 caps for England and Great Britain, competing in three Olympic Games – looks back on her memories of Rio 2016 and provides insight into the incredible conservation work of the Tofauti Foundation, the project she has set up in the country where she grew up and very much regards as home, Kenya.

The video interview with Crista Cullen has been edited, with a full transcription being available below.

It has been four years since Great Britain’s women shocked the world by winning the Olympic gold medal at Rio 2016. How do you feel about it now, looking back on that wonderful time?
Crista Cullen: “I think it is still somewhat surreal. I cannot believe it is four years ago. It feels like yesterday, and yet it doesn’t feel like it happened at all, all at once. I think most of my team-mates will say the same thing. It was a shock for a lot of people, but I think we were pretty sure what we were after at the Olympics, and we weren’t willing to leave the field until such a time that we got what we had worked so hard for. It is a very proud moment still, but as I say, a little bit surreal.”

What were your favourite moments in Rio, and which result on the way to the gold medal made you think “we really can win this”?
Crista Cullen: “My favourite moment, of course, was standing on the top of the podium, a position that we had only hoped, wished and dreamed that we would get to. That moment of overwhelming feeling, as I’ve just explained, the surreal nature of it, because it had been such a long time to try to get there, for a few of us. Myself, Kate Richardson-Walsh, and Helen Richardson-Walsh, we’d all been in the campaign pre-Athens [2004 Olympic Games], coming from failure [to qualify for Athens]. It had been a long old journey, so that was very special. I think the moment when I thought we could genuinely ‘do this’ was against Australia, which is quite ironic, because it was our opening game. We knew that we were playing the world number two, and I always say that tournament sport is how you start, and we gathered momentum from there, winning eight matches in 13 days, the rest speaks for itself.”

Your own journey to Rio was quite unusual, having enjoyed a fine career before stepping away from the game for some considerable time after winning bronze at London 2012. Tell us about your remarkable comeback.
Crista Cullen: “As you rightfully said, I hung up my boots in 2012, as I thought that would be the best Olympics I would ever go to. A home Olympics as a Great Britain athlete, 15,000 people shouting for you every time you step out onto the field is a pretty unique experience as a hockey player. I thought it was the best it was ever going to get, so I returned home. The pull for me was too much, to come back to Kenya and pursue my passion in conservation as well as work in the family business in security. Then, one fateful day in April [2015], Great Britain head coach Danny Kerry, who had coached me both in Beijing [2008] and London [2012], phoned me and asked if I’d consider returning. I have to say, my decision was quite a difficult one. It took me six months to really make the right decision, within which time the girls had to qualify for the [Rio 2016] Olympics. So, I committed in October 2015, and had a ten-month run-in to Rio to get myself into the squad of 31, firstly, and then get myself into the 16 that were named for Rio. So, it was a good old battle with ten months to go, but it thankfully worked out.”

How has your life changed since winning Olympic gold, and what are your memories of the immediate aftermath of that success, knowing how much it meant to the nine million people who watched it on TV in the UK?
Crista Cullen: “Thankfully, we didn’t know that there were nine million people watching our Olympic final! But, at the same time, the aftermath was initially celebratory; massive, massive celebrations. It was lovely that Great Britain Hockey had gathered all of our families and friends that had travelled over Rio to support us - we all collectively congregated and enjoyed the celebrations massively. Ironically, it was my birthday at midnight that night [after the final win against the Netherlands], so there is not much memory of what happened after that! Then of course, what was so important to all of us was that, in some ways, winning gold really does put hockey on the map. A massive increase in the participation of our sport, with young children – boys and girls. We needed to nurture and encourage children to continue to play a sport that we have enjoyed for so long. You allude to nine million people [who watched], but it was then about how many more people we could affect after that. As hockey, I think it is really important that we nurture that interest for as long as we can, and hopefully we’ve been able to capture one or two youngsters who wouldn’t have always taken up our sport.”

Not including your own incredible gold medal success, what is your favourite Olympic moment of all time from the other sports, and who is your favourite Olympian and why?
Crista Cullen: “I’ve sort of got two people who stick out to me, ironically both from the Winter Olympics. [Great Britain skeleton racer] Lizzy Yarnold came up to me some time back and actually said to me that her decision to return to the sport was because she had seen mine, and that I had done it in a short period of time. Then she went out there and nailed it, winning an Olympic gold medal. I find that inspiring, that maybe mine helped somebody else. The people that really inspire me are ‘post-success’. There is a guy called Johann Koss, who won four Olympic gold medals in speedskating for Norway, but then he went on to set up something called Right To Play, which gives opportunities to children who don’t normally get them, in war-torn areas notoriously in Africa and Asia and other places. He, through his success, has been able to touch the lives of numerous children, giving them an opportunity to enjoy sport and learn through the education of sport. So, people that have a message. It is one thing getting success and being lucky enough to be one of those people that are successful, but it is very much another to leverage that opportunity, have a voice and go out there and make a difference. Those are the people who massively inspire me.”

You are heavily involved in conservation, particularly in Africa. Can you tell us more about the work of your Tofauti Foundation, and its importance to you personally?
Crista Cullen: “Well, I think that question knits in quite nicely with the question before. You are given an opportunity when the audience starts listening to you because you have been successful in one field, and I find that very humbling. So, exactly what Johann did and a number of others have done, Linford Christie etc, setting up various initiatives in what they are passionate about. I leveraged my other passion, which has been conservation. I set up the Tofauti Foundation, which tries to help wildlife and communities in Africa, with a whole host of different initiatives that will leave a lasting legacy and make a genuine difference. That is what [the word] Tofauti means, it means difference, in my native tongue of Swahili.  My big passion is about leaving a legacy, trying to help people, and wildlife, who are less fortunate than ourselves and, of course, I’m in those situations – being an African, being a Kenyan – regularly, and I love having the opportunity to be able to give back. If anybody is interested in conservation at all, I’d love the opportunity to speak to you and to work with you, whatever it may be. With Tofauti, I’m learning as I go – I don’t believe I know everything, but I believe in collaboration and working together. Whatever your passion is about, whether it is conservation, whether it is humanitarian, they all have a similar moral compass to make an impact, and that is what I am trying to do with Tofauti.”

For more information about the Right To Play initiative set up by Johann Koss, please visit https://righttoplay.com/.

---------------------------------------
On this day – 6 August 2016: As referred to by Crista Cullen in the above interview, Great Britain’s women made a stellar start to what would prove to be a glorious campaign at the Rio 2016 Olympic Games, with Lily Owsley and Alex Danson scoring the goals in a 2-1 Pool B victory over Australia. After winning their pool with five wins from five matches, GB would go on to beat Spain (quarter-final) and New Zealand (semi-final) before getting the better of the Netherlands in a dramatic shoot-out, snatching the gold medal after regular time finished locked at 3-3.