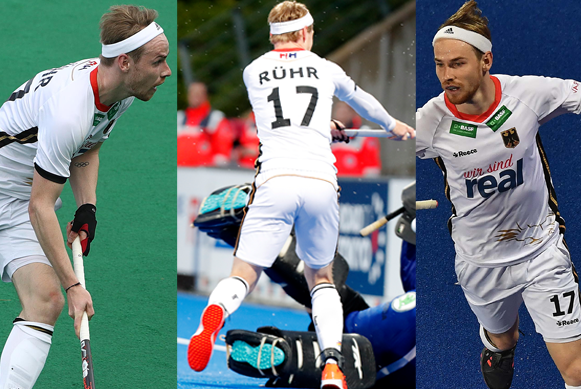 Christopher Rühr might strike fear into the heart of defenders as he runs at them, intent on finding a way to goal. But at his core he is a man to whom family and teammates mean everything and every goal he scores is dedicated to the memory of his late father.

Rühr made his senior debut in 2012 at the Champions Trophy in Melbourne Australia where he scored three goals. Since then, Ruhr has represented his country more than 140 times and has been leading goal scorer at no fewer than four major tournaments. When the FIH Pro League came to a necessary halt in February due to the Covid-19 restrictions, Germany had played two games and Rühr had scored three goals.

The word clinical takes on a double meaning in reference to the 26-year-old. Rühr’s prolific goal-scoring demonstrates all the dedication and precision of a world class striker but away from the pitch he is following in his father’s footsteps by training to become a doctor – a career where his determination and concentration will be an undoubted asset.

For this interview, Rühr took some precious time away from his medical studies to talk to us about the influences in his life, his proudest moments on the pitch and just how much his teammates mean to him.

Who has been the biggest influence on your career?
Christopher Rühr: Definitely my whole family, especially my late dad, who I dedicate all the goals I score to. My sisters, brother and mother always support me in all that I do. You also need a good coach and mentor, which I have in Andre Henning. He has supported me from a young age, obviously in hockey technical stuff but also mental stuff where I probably made my biggest development. That was probably the biggest part of my hockey.

If there was one sentence to sum up your playing style or attitude on the pitch, what would it be?
Christopher Rühr: Tough question! I would say my attitude is determined, very competitive and probably a little cheeky at some points. When it comes to playing style I try to eliminate my opponents with high speed, skills and I think 3D skills at high speed are also part of my skill-set. That would probably sum up my playing style.

What moment on the pitch are you most proud of and why?
Christopher Rühr: I am obviously proud of every goal I score, especially when it’s a good one but the proudest moments are always winning trophies and celebrating with your teammates – that is just the best feeling in the world. The best moment was definitely the bronze medal at the Rio Olympics because the Olympics are the biggest sports tournament in the world and winning a medal at that tournament is something that is really unique and I am very proud of that. It was great fun celebrating that medal with my teammates and we are still always talking about how great it was.

It has been four years since Rio 2016, how have you changed as a player in that time?
Christopher Rühr: I guess my role in the team has changed a little bit. I am not the ‘young guy’ anymore. So that has changed. My playing style has changed in that I am probably more thoughtful on what I do. Consideration of when to go one-one-one, or one-on-two is probably healthier than back then. I always wanted to attack and go, no matter what happened afterwards, so that has changed definitely.

What part of returning to playing after this enforced break are you most looking forward to?
Christopher Rühr: Definitely the fun part. Training with my teammates, laughing at training sessions, mucking around. Besides the fact that I love the game and love playing, doing exercises and playing games is the fun part. Meeting the boys and having laughs with them is the thing I am missing the most.