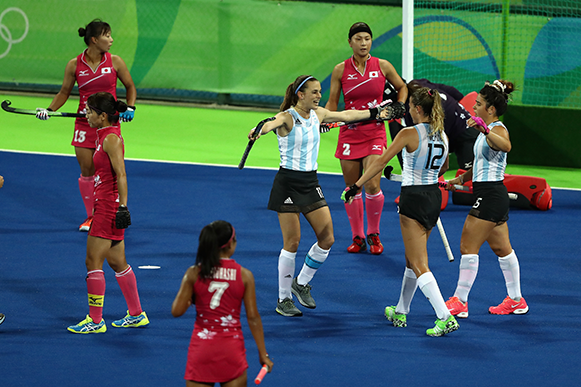 Carla and Delfina: memories and dreams

In the latest of our stories marking the original event dates of Tokyo 2020 we meet two Las Leonas legends. With more than 600 caps and five Olympic Games between them, the strike team of Delfina Merino (294 senior international appearances and two Olympic Games) and Carla Rebecchi (317 caps and three Olympic Games) are formidable opponents for any defence. And, as we hear during this conversation, the target for Tokyo 2020 is definitely gold.

Merino and Rebecchi took time out after a training session with the Argentina national team to talk about previous Olympic Games and their hopes for the future.

What did you feel like when you were standing on the pitch listening to the national anthem at your first Olympics?
Carla Rebecchi: “My first match was against the USA, I was 23. It was very emotional, I was nervous and anxious in that moment, but also very excited. It was a great memory.”

How is Argentina preparing for the Olympic Games next year?
Delfina Merino: “The team is preparing in a good way. We are training a lot. (We just finished a training session actually). Of course this has been a special situation because we were not training because of the Corona Virus. Now we are starting to really train in earnest and we are looking forward to Tokyo next year.

What will it take for Las Leonas to finally win that elusive gold medal?
Defina Merino: “I think there are any things that have to happen for us to win. I think the most important is to make the team work together and to enjoy the process. To enjoy the way [journey] to the Olympics. So if we do our best as a team, do our best in training and all do it together, then we will have a good opportunity [to win the gold medal], I really hope.”

On this day – 29 July 1984: Aside from India winning gold at the 1980 Olympic Games in Moscow (as mentioned above), it was also the first day of the men’s hockey competition at the Los Angeles 1984 Games. West Germany’s journey towards the men’s final started with a 3-1 Group A win against Spain, with Carsten Fischer, Reinhard Krull and Michael Peter scoring the goals. Germany would eventually finish with silver, losing 2-1 to Pakistan thanks to Kaleemullah Kahn’s goal in extra time.