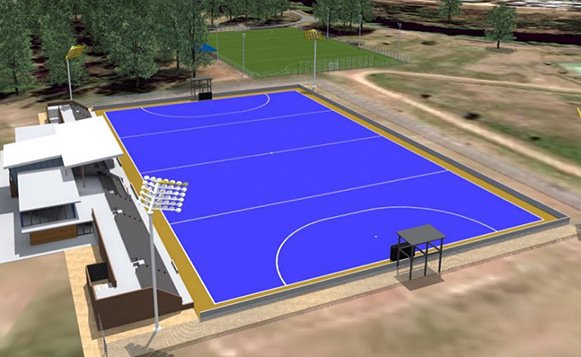 Uruguay is a hockey nation that has been punching above its weight for many years. Now the national governing body is replicating the tenacity and determination shown on the pitch as it seeks to complete a project that it hopes will lift its national squads to a new level. But for the final stages, as President of the Uruguay Hockey Federation, Danae Andrada explains, the Federation is seeking the help of the global hockey community.

With the national women’s team ranked 25th in the FIH World Rankings and the men’s team ranked 56th, Uruguay performs well on the PAHF and international scene. In 2019, the women’s national team reached the Hockey Series Finals in Japan and held their own magnificently against higher ranked and more internationally experienced teams such as Poland, India and PAHF neighbours Chile. The men are regular bronze medallists at the South American Championships and have qualified for the Pan American Cup on three occasions.

The remarkable thing about these achievements, is that Uruguay has not had a central hockey hub where the national squad players can gather and which they can call a home. Until now, the national teams have trained at a number of venues scattered across Uruguay. This has meant the amount of time the squads can train together has been limited and there is no central venue for hosting international visitors.

The Uruguay Hockey Federation has been working hard in recent years to change this. When the Association won the FIH Pablo Negre Award in 2015 (for innovation and adhering to the spirit of hockey), the concept was first born and, in November 2019, work finally began on a new pitch, stadium and facilities that will be of international standard.

The first job was to clear land and dig foundations at the city council-owned Lavalleja Park land, which has been handed over to the association for a 20-year period.

By April 2020, the sub- base level was complete; the synthetic floor had travelled to Uruguay from Germany; the shock-pad from Portugal and Italy; the water treatment system from China; and machinery from Hong Kong. The pitch itself will be supplied by Polytan Asia, with the lights provided by Musco.

However, through the Covid-19 crisis, the equipment has been stuck in storage and the Uruguay Hockey Federation has been waiting for borders to re-open so the Polytan technicians can start to install the shock-pad and carpet.

With the dream so close to realisation, the onset of the Covid-19 pandemic could not have come at a worse time. Meeting potential sponsors and fundraising activities all ground to a halt. The project remains tantalisingly close to completion.

Andrada gets emotional through her frustration: ‘We know we need support for the last step and COVID-19 situation has made it a real struggle for us when it comes to finding new sponsors or financial aid from our government. For sure health and social concerns are above all but we are running our own race to finish this construction.”

And so the Uruguay Hockey Federation is calling on the hockey community to help get the project over the finish line. A further 30 per cent of the final costs are still needed, but the Federation is turning to innovation and digital technology to get the dream realised.

An App has been launched, called Cancha Celeste or Sky Blue Pitch – in recognition of the striking blue turf that will eventually be laid. Via the App, people are invited to buy a metre of the turf anywhere they choose on a virtual replica of the playing surface. Early popular purchases are in both goal mouths, circle areas and around the centre spot.

Individuals, clubs, national associations and continental federations who donate money and buy a metre of the pitch in this way will see their name displayed on a huge advertising banner that will be situated next to the pitch.

Substantial support has already come from the Federation’s sponsors: Movistar, Polytan, Gustavo Amespil Dispatchers and Musco. Now the Federation is asking the wider international hockey community for some support and individuals and clubs from across the PAHF region are responding to the call.

The importance of a high quality pitch and stadium for both Uruguay and the region has been noted by Pan American Hockey Federation President Alberto ‘Coco’ Budeisky: “The end date of a dream held for a long time by the entire Uruguayan hockey family is approaching,’ says Budeisky.

“Uruguayan hockey has seen great growth, especially in the women's sector, in recent years. It has  shown such potential at youth, junior and senior levels.

“Despite not having a national stadium at which to train, the brave Cimarronas, have demonstrated their qualities and determination to progress. Its leaders and fans have made great efforts to support this project, which was born some years ago with the Pablo Negre Award from the FIH.

“Now, despite the pandemic, which did not make things easier, we see this is taking shape. It is a deserved achievement, which will help the development of hockey in Uruguay and consequently, across all Pan American hockey.”

And Andrada, who has been driving this project since its inception, adds: ‘It will allow an exponential growth to our local sport. Indeed, this will help our national teams to train in the same conditions as others they meet in the international competitions.

“We are calling on the international hockey family to help us get this over the line. We believe this project will allow us to host the hockey family around the world in our own house, we are willing to host all of them and we enjoy organising different competitions that bring us all together.”