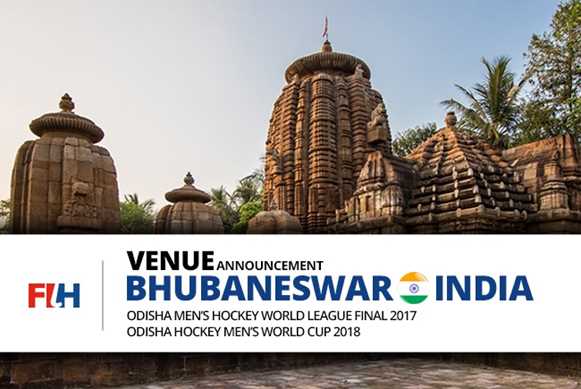 The International Hockey Federation (FIH) and Government of Odisha have today officially confirmed that the Men’s Hockey World League Final 2017 and Hockey Men’s World Cup 2018 will be held in Bhubaneswar, India.

Fans will descend upon the Kalinga Stadium to share the glory of two of hockey’s biggest events, where World League and World Cup champions will be crowned.

The venue itself is already familiar to hockey fans. Not only did it successfully host the 2014 Men’s Hero Hockey Champions Trophy, it is also home to the current champions of the Coal India Hockey India League - the Kalinga Lancers.

The multi-purpose stadium, built in 2010, has facilities for athletics, football, basketball, tennis, table-tennis and swimming, ensuring that it is well equipped to host international sporting events.

It was also confirmed that the State of Odisha will be Title Sponsor of both events. As a result, the official event titles will be the ‘Odisha Men’s Hockey World League Final Bhubaneswar 2017’ and the ‘Odisha Hockey Men’s World Cup Bhubaneswar 2018’.

The Odisha Hockey Men’s World Cup Bhubaneswar 2018 will take place in late November / early December in 2018 and will see 15 teams join hosts India at the event. They will qualify from the Hockey World League Semi-Finals and Continental Championships, also taking place this year.

Speaking about this announcement, FIH CEO Jason McCracken said: “India is a nation with a proud hockey heritage with a history of hosting world-class sports events. Each time we return to the country Hockey India raise the bar, embracing goals outlined in our 10-year Hockey Revolution strategy aimed at making our events innovative and exciting for our fans. We have no doubt that the Odisha Men’s Hockey World League Final Bhubaneswar 2017 and the Odisha Hockey Men’s World Cup Bhubaneswar 2018 will be unforgettable events for everyone involved.”

FIH President Dr Narinder Dhruv Batra added: “Bhubaneswar is a city ready to welcome the world. Its passionate sports fans and our experienced hosts will create an incredible environment for our stars to shine during what are the two of the biggest events in our sport. We encourage fans from across the world to come together and share the glory with their teams, each of them aiming to become world champions in these respective competitions. In doing so, fans will also get to experience first-hand the rich culture and warm hospitality offered by this amazing part of the world.”

Shri Naveen Patnaik, Hon’ble Chief Minister, Government of Odisha, expressed that the global events will not only enthral hockey fans in the state but also help promote the sport among the younger generation. "It brings me immense pride to announce that the Government of Odisha will be hosting the prestigious Odisha Men’s Hockey World League Final Bhubaneswar 2017 as well as the Odisha Hockey Men’s World Cup Bhubaneswar 2018. Over the years, Odisha has played host to several reputed international events and we are very happy to be hosting the hockey events in Bhubaneswar which has seen thousands of hockey fans throng the Kalinga Stadium for hockey matches be it the Coal India Hockey India League or to cheer the international teams during the international events. I am delighted that the FIH and Hockey India have chosen us as hosts and I am sure all the teams, officials and fans heading to Bhubaneswar will have a thoroughly enjoyable experience in this city which is rich in its culture, heritage and has a unique history that will provide lasting memories. I wish the participating teams the very best in their preparations and I am confident our officials with do everything in their capacity to make these mega events a big success."