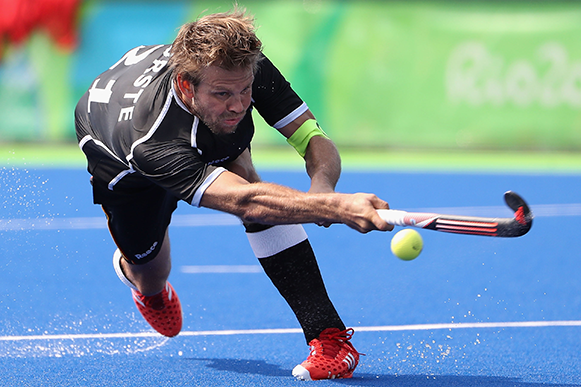 In part two of our special interview with Germany legend Moritz Fürste, he talks about the best players he played both with and against during his illustrious career, as well as his memories of the epic Rio 2016 quarter-final match against New Zealand, where Die Honamas produced one of the greatest comebacks in the history of Olympic hockey.

You played against the very best players in the world, some of the best that have ever played the game. Who would be in your top three toughest opponents list?
Moritz Fürste: “I started my career playing against Teun [de Nooijer of the Netherlands] and Jamie [Dwyer of Australia]. I mean literally, because they were both playing right midfield, I was playing left and we man-marked. For the first couple of years of my career, when we played them, I had to mark them, and that was the toughest school I could have gone through. Later, I really had big fights with Eddie Ockenden from Australia, in midfield. Also, with (fellow Australian) Simon Orchard from time to time, but I would probably go with Eddie in that meaning. He could just eliminate, and that was the most difficult thing if you man marked. When someone was really good at eliminating, you were the guy who had to chase because everyone else was also man marking! He had that skill, especially with his stupid forehand drag that drove me crazy. And I knew it was coming! You could see it was coming. You knew he was going to do it, but he still caught me so many times!

“It’s interesting, because at one point it shifted, I think. I felt it became easier for me to defend because people started to not really attack me anymore. They were playing a little bit more around [me], probably because word got around that I might be a decent player. I really felt that I was probably not getting even 50% of the defensive one-on-one situations [that I had previously] after let’s say 2011. Because people were going around me more, I was not defending so much in one-on-one situations. That Is why the picture changed a little bit, but Jamie, Teun, Eddie – I think these are the toughest opponents I played against in midfield.”

Who would be in your top three players that you played with, for club and country?
Moritz Fürste: “I mean, the best player I played with – obviously I could name a few – but I would start with Christopher Zeller, no doubt about it. He was a machine. He could decide matches by himself on any given day. For his talent, he could have won World Player (of the Year) probably ten years in a row. He should have won in in 2006 when he basically won the World Cup (in Mönchengladbach) by himself. He won the junior award that year, but he should have won the [senior] World Player award. Playing with him was [a joy]. You could always get the ball to him, he was physical, his corners were exceptional – he was just so delightful [from my perspective] as a midfielder to look at him, because whenever he was open you would get the ball to him, like a go-to guy in basketball.

“Tobi Hauke is right up there. I could always count on Tobi to play the best hockey that he possibly can when it counted. That is very unique. There are so many amazing players in the world, but being on their very best game whenever it counts, not many players can say that about themselves and Tobi can. So, he is just ‘up there’.

“The third I want to mention is Billy [Bakker of the Netherlands]. I played with him in India for two seasons. That was the first time I experienced the Dutch style of playing, in a way. I played as a forward the season we won the tournament there, the Hockey India League in 2017. You could just give him the ball and he would be able to do this ‘give and go’ kind of thing, hitting top speed whilst also still trying to get the ball to you, only a two-metre pass, and get it back. That kind of offensive knowledge and being smart on the ball, that really impressed me. It was a lot of fun playing with Billy, on and off the pitch, and it was a big part of the success story in that year.”

At the Rio 2016 Olympic Games, Germany produced an epic fightback to defeat New Zealand in the quarter-finals. You were 2-1 down with less than a minute to go, and you ended up winning 3-2 thanks to a last second winner from Florian Fuchs. What are your memories of that contest, and where it stands in the greatest comebacks of your career?
Moritz Fürste: “I think it was one of the biggest comebacks in Olympic sport. Five minutes before the end [with Germany 2-0 down], I was benched for a few minutes, talking to the coach. We got the playing ‘goalkeeper’, Martin Háner [onto the field]. I was going back on the pitch, looking at the clock and there was four minutes and 51 seconds left. I was just saying to myself ‘this can’t be the end of my career. It cannot be over now, that’s impossible. That’s not how the story is supposed to end.

“I stepped back on the pitch, and we got this [penalty] corner. I think Christopher Rühr even got three corners by himself around that time. Then we scored the first one, 2-1 [scored by Fürste]. We went back at it and missed a couple more corners. Then we got it to 2-2 [also scored by Fürste], and we were all preparing for the shoot-out. Even our coach [Valentin Altenburg], I don’t know if you remember the scene on the highlights, but he is already writing down names on his clipboard. He wasn’t even watching [the game], he didn’t see the goal!

“We had this last counter-attack, and I’ve got to be honest with you, it was not well done. In that moment, no offence New Zealand, but it just was not a good defence. That’s how the ball went in. They should have tackled Florian [Fuchs] and smacked the ‘whatever’ out of him before the 25 [metre line], not to give away a [penalty] corner, but a free hit and a yellow card, or whatever. I mean, we were lucky in the end, but it wasn’t well played, it was rather not such good defending at that moment, and I really don’t want to offend my New Zealand friends, but I think that in a few years, they will also see it that way!”

It was certainly dramatic!
Moritz Fürste: “That’s for sure. And I love watching the highlight clip. I’ve watched like a million times!”