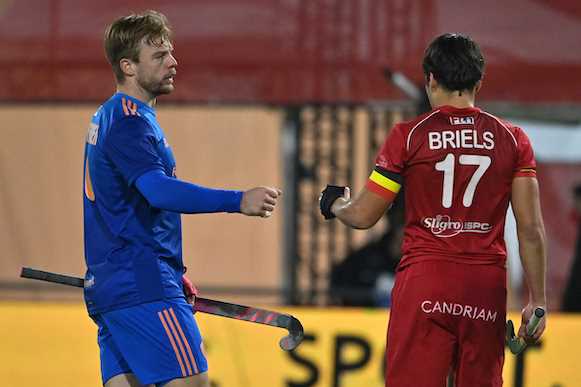 There may not have been any fans present due to the Covid-19 health protocols in place, but that did not stop fans using the Watch.Hockey app from selecting November’s thrilling 4-4 draw between the men of Belgium and the Netherlands as being the best FIH Hockey Pro League match of 2020.

The superb encounter – in which Belgium took the bonus point by winning the shoot-out after the two teams shared eight goals in regular time – claimed a 29.14 percent share of the fan vote, finishing ahead of the Netherlands women’s 3-1 victory against Argentina in Buenos Aires (2nd place - 22.73%) and India men’s 2-1 triumph over reigning world and European champions Belgium at the Kalinga Stadium in Bhubaneswar (3rd place - 13.19%).

The Belgium versus Netherlands clash was the clear winner in the ten-strong, mixed gender shortlist that attracted votes in their thousands from all over the world.

To mark the occasion, we chatted to Belgium midfielder John-John Dohmen – who is just two games away from joining a handful of players to have played 400 senior internationals – about this very special Low Countries derby match.

FIH: John-John Dohmen, nice to talk to you! I can tell you that the Belgium game against the Netherlands, played in Brussels last month, has been voted as the best game of the FIH Hockey Pro League in 2020. What are your memories of the game, as a player involved in it?
John-John Dohmen: “It was a really nice game to play, I think. It was pretty cold that day, so it was not easy to be really focussed and really sharp for the game. But we did well, and Holland did well also. If you have a game like that, with four goals to each team, it is pretty impressive. I think it was a nice game to watch on TV, but it was a pity that the public was not present, but we know why. It was a nice game to play, I think.”

FIH: Hockey had been away for such a long time. There had been some pretty good games before, but this match was a real reminder of what everyone had been missing since the coronavirus pandemic kicked in. I think that the fans just loved that they got to see two world class teams in action. It must have been fantastic to be on the pitch, being part of that.
John-John Dohmen: “Yes, and it really was an offensive game, I would say. I think Belgium and Holland, they played to win of course, but also to play some good hockey and to score some goals. So, we were not waiting to defend, and it was the same for our opponents. It was a nice game to play; really open, tactical as well, which is something that I like. I think we saw quite a lot of mistakes tactically, but also saw nice hockey skills and nice goals, so it was an interesting game for us.”

FIH: It was certainly close! You guys took a 1-0 lead early in the match through an Alexander Hendrickx penalty corner, but the Dutch hit back immediately through Jeroen Hertzberger and took a 2-1 lead into quarter-time thanks to Thierry Brinkman. At that stage, were you thinking that this was clearly going to be an open, attacking game?
John-John Dohmen: “Mentally, it was very interesting, because we were leading and playing well, but then they came back immediately and then scored a second goal. We had to react, and we did so really well. Obviously, it is nice to play a game like that, because anything can happen. We can take the lead and they can take the lead; we cannot make any mistakes because they could come back into the game. I think mentally it was very interesting, and a good lesson for the future.”

FIH: Maxime Plennevaux scored Belgium’s equaliser just after half time, but then the Dutch went ahead again just a minute later through Jip Janssen, giving the Dutch a 3-2 lead. Then, in the final quarter, there were three goals in three unbelievable minutes. Your team moved into a 4-3 lead thanks to Florent Van Aubel and another penalty corner from Alexander Hendrickx, but then Billy Bakker levelled things up – it was an incredible final quarter of hockey.
John-John Dohmen: “Yes, I think the last quarter was a really quality game, especially for us. We played really well, and we were winning 4-3, scoring those two goals in two minutes. We didn’t expect Holland to come back at the end of the game, but it was a beautiful effort from Billy Bakker. I think he did 40 metres alone to score the goal, it was well done. But we should have won that game, especially at the end, even if a draw was [a] logical [outcome].”

FIH: It went to the shoot-out, and goalkeeper Loic Van Doren turned out to be the hero. He’s a young man who is starting to make a name for himself.
John-John Dohmen: “He is a really good goalkeeper. People always talk about Vincent Vanasch, which is normal – he is our first goalkeeper and the best in the world. But Loic Van Doren is also really good, and I think he showed during the three games, because he played also against GB, that he is really good. And yes, impressive in shoot-outs as well. We are really confident in our two goalkeepers because they can both make the difference. It was nice that he could show himself that he can play that kind of game on the best level.”

FIH: Obviously we know the coronavirus situation meant that there couldn’t be a crowd there to witness such an incredible game. How much of an impact did the lack of a crowd have on you guys? Did you just forget about the fact that they were not there, and just got on with the hockey?
John-John Dohmen: “To be really focussed on the game and to be really motivated, I think it is easier with the crowd because they can motivate us when we warm up, when we play at home. It gives us more energy to start the game. When we are playing, we are not thinking about it. But sometimes, we need a bit of support in difficult moments or when we score a goal. That was not there, so it was a bit disappointing for us, but it is like that, so we have to do it without the public at the moment. Because we were playing at home, we were thinking a bit more about it, so the impact was a bit bigger than if we played away. It did not have a huge impact, but I think we could have played better with the public, that’s for sure.”

FIH: Do you want to say anything to the fans who voted for this match as the best game of the FIH Hockey Pro League in 2020?
John-John Dohmen: “Yes! Thank you for voting for us and Holland. I think it was a nice game to watch, and a really nice game to play as well. It is always a great game, Belgium against Holland. It is always important in tournaments. If you look at the last Pro League, the last World Cup, or even the last Olympics, they are always decisive for the end result. I think in the future it will be the same, so we expect to play more great games against Holland, in the Pro League, the European Cup, or at the Olympic Games.”

FIH: Well, thank you so much for your time today, and very best of luck for 2021!
John-John Dohmen: “Thank you very much!”

Don’t forget to download the Watch.Hockey app, where you can find the latest news and interviews as well as action replays and highlights. Simply search Watch.Hockey in the App Store or on Google Play. A desktop version of the app is available at www.watch.hockey.