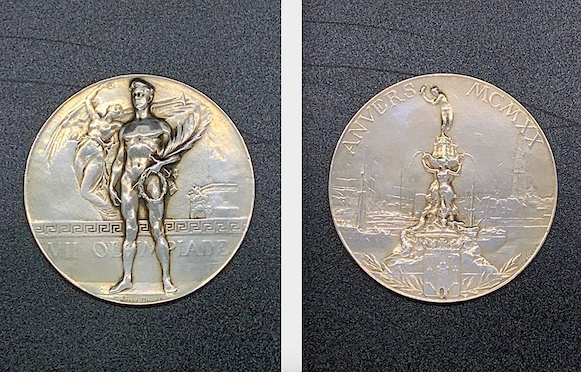 The Olympic gold medal won by Harry Haslam at the Antwerp 1920 Games. Copyright: The Hockey Museum.

The Hockey Museum has had its first sight of a 1920 Olympic gold medal. It was won by Harry Haslam, the Great Britain goalkeeper at the Antwerp Games, and has been loaned to the Museum, together with other memorabilia, by Haslam’s family.

It will be displayed at a private presentation at the Museum on 5 September, when members of Haslam’s family will receive his Great Britain honours cap. Saturday is the centenary of the final day of the 1920 Olympic hockey tournament, played as a four-nation round robin event, and the centenary of the awarding of gold medals to the GB team. Great Britain had beaten Denmark (5-1) and the hosts Belgium (12-1) and were awarded a walkover in their final game against France on the previous day to secure gold.

The official launch and presentation of honours caps to the GB teams, most of whom will be going to the Tokyo Olympics, will be made at an FIH Hockey Pro League weekend next May.

Besides the gold medal the memorabilia includes an oil painting of Haslam, an Antwerp participation medal and civilian medals.

The Antwerp medal is of gold gilt, unlike the 1908 London Olympic gold medal, held on loan by The Hockey Museum, and looks more like silver. It is believed this less expensive metal was used because money was still scarce so soon after World War One.

"On the obverse, a tall, naked athlete, holding in his left hand a palm leaf and a laurel crown, symbols of victory. Behind him, the figure of the Renommée playing the trumpet. In the background, a frieze with a Greek motif with the inscription "VII OLYMPIADE" underneath.

On the reverse, the Antwerp monument, commemorating the legend of Brabo throwing into the Scheldt the hand of the giant Druoon Antigoon, who had been terrorizing the river. In the background, the cathedral and port of Antwerp. In the top half, the inscription “ ANVERS MCMXX ”.

The legend says that in Antiquity, this cruel giant forced all vessels on the river to pay a toll. If the captain refused to pay, he cut off his hand. The giant spread terror amongst the sailors for many long years, until the day he met Silvius Brabo. This courageous Roman soldier dared to take on the giant and succeeded in killing him. As revenge for his victims, he cut off the giant's hand and threw it into the river. This is where the name of the city comes from – “Antwerp" means "thrown hand."