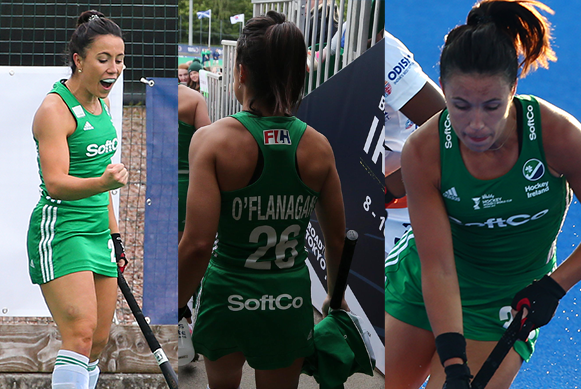 Their run to the final was as unexpected as it was brilliant. Ireland entered the competition with an FIH World Ranking of 16 – the second lowest of any of the 16 nations competing in London – but finished second highest in the standings behind Alyson Annan’s all conquering Netherlands team.

The achievement in London captured the imagination of sports fans globally and, as star striker O’Flanagan herself admits in this interview, has dramatically raised the sport’s profile in Ireland, as proven by the 6000 fans that flocked to Dublin’s Energia Park Stadium for two sell-out FIH Olympic Qualification matches against Canada in November 2019. Two incredibly tense clashes against the Canadians finished scoreless, but the home fans did not leave disappointed. Ireland’s women secured Olympic qualification for the first time in their history thanks to a dramatic 4-3 victory in the shoot-out.

At what is clearly a very special time for Irish women’s hockey, Anna O’Flanagan – Ireland women’s all-time top scorer with 81 goals in 207 appearances – talks to FIH about her team’s monumental achievements in London and Dublin, their ambitions for next year’s delayed Tokyo Olympics and the importance of enjoyment whilst striving to become a better hockey player.

Hi Anna, thanks for talking to us. You have enjoyed some wonderful times with the Green Army in recent years, famously claiming silver at the Vitality Hockey Women’s World Cup London 2018 and securing a first ever Olympic qualification for the now delayed Tokyo 2020 Games with a dramatic shoot-out win over Canada in front of 6000 fans at Dublin’s Energia Park Stadium. How do you reflect on these incredible moments, and what is your biggest ambition in the years ahead?
Anna O’Flanagan: “The World Cup was just absolutely magical for us, there is probably no other way to describe it. It was just incredible from start to finish. To get a silver medal and reach that final was absolutely amazing. I think the Olympic Qualifier was something special for our team as well, it probably wasn’t pretty on the day, but we got there in the end and that is the most important thing. Securing that ticket to Tokyo was all that mattered to us. Our ambitions for the road ahead are really focussing on getting to Tokyo and doing the best we can. Not only ‘just’ getting to Tokyo, but also really performing at the Olympic Games, trying to compete at the top level.”

Who or what first influenced you to pick up a stick and play hockey?
Anna O’Flanagan: “I suppose when I was younger, I just played every sport that I could. I played football, tennis, golf – anything that I could really do. I think my parents knew that hockey was quite popular in Dublin amongst girls, and they knew a lot of my friends would probably be playing it as I grew older, so they got me involved. I was maybe around seven or eight [years old] when I got my first stick, and absolutely loved it from the get-go.”

Who has been the biggest influence on your career and why?
Anna O’Flanagan: “I think it is really hard to pick just one person. I think I’ve learned a lot from every single coach that I’ve had. I also think I’m probably quite self-driven, so I really push myself as much as I can, putting pressure on myself. Obviously, there has been a lot of girls that I’ve played with that I really look up to, and I aspire to be like them. I’ve definitely gained inspiration from a lot of different sources.”

How would you best describe your playing style or attitude on the pitch?
Anna O’Flanagan: “I think I’m pretty passionate when I play – I really care a lot about all of the teams that I play for, and I am definitely pretty ruthless. I just want to win at all costs, so definitely very competitive.”

What moment on the pitch are you most proud of and why?
Anna O’Flanagan: “It has to be qualifying for the Olympic Games. It certainly wasn’t the prettiest or the nicest hockey that has ever been played, or the nicest conditions, but for us as a team and me as an individual, it is something that we have always aspired to achieve. We’ve been working on it for so many years, so to eventually achieve that dream is so special. To be able to do it in Dublin in front of a home crowd was incredible.”

What would be the best advice you could give to aspiring young hockey players?
Anna O’Flanagan: “I think that young players just need to get out there and try as many things as you can. Don’t specialise too early in certain things, just learn as many skills as possible and try to get good at as many as you can. I also think, just enjoy it. Enjoy playing with your friends and don’t put too much pressure on yourself early on.”

The ongoing COVID-19 global health crisis has had a profound effect on every aspect of life, sport included. Have you been able to resume any level of on-field training activities at this stage?
Anna O’Flanagan: “The last few months have been very difficult, I think, for everyone around the world. For us, we were busy training for the Olympics and, with the postponement there, things were all put on hold. Luckily, over the past couple of weeks we have been able to get out and train a bit more, and we’ll be getting back out onto the pitch very shortly. We haven’t quite got back out onto the pitch just yet, but we are getting close to it and we are looking forward to that.”

Finally, your fairy-tale story at the 2018 World Cup in London, not to mention the sensational welcome you received on your return home, is well known and very well documented! How has what happened in London changed both your life and also the profile of hockey in Ireland?
Anna O’Flanagan: "Obviously the World Cup was incredible for Irish hockey – the welcome we received when we came home was something that I would never have anticipated in all my years playing hockey. I think for us, as a team, we are a little bit more recognised now, and we are really lucky that we have got a couple more sponsors on board, which has allowed us to train a bit more full-time. I think it terms of our lives, I know that my life hasn’t changed a whole lot. I’m still having to balance everything, playing for Ireland and other things. Yes, it is amazing for Irish hockey. We have definitely put it on the map, and we have big ambitions as to where we want to go. It has definitely changed the sport in Ireland forever.”