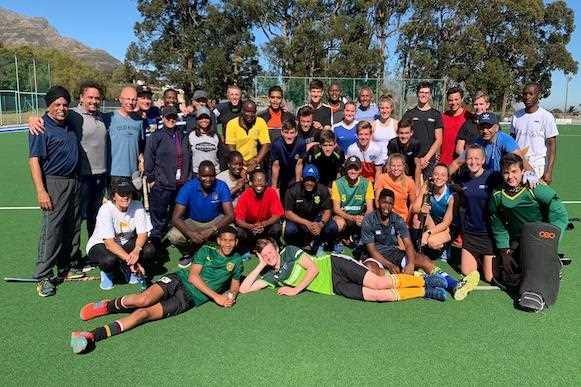 An invaluable experience in Stellenbosch

It wasn’t purely the hockey on the pitch that people enjoyed at the African Hockey Road to Tokyo 2020 in Stellenbosch. For more than 40 coaches, officials and umpires, a series of four courses running alongside the main event, provided a fantastic chance to upskill and share information with counterparts from other nations.

The courses were attended by people from a range of nations, including South Africa, Zimbabwe, Namibia, Uganda and one candidate from the USA, who took a break from his holidays to join the Level 2 Coaches course.

Among the skills taught were general skills such as organisation and communication. The importance of building a team was a recurring theme for the candidates on the Umpire Manager’s course, while the Level 2 coaches learnt all about taking a player-centred approach to their work.

The feedback on the four courses praised the delivery of the courses and the way the information was passed on, through a combination of classroom-based and practical sessions.

Even for someone as experienced as international umpire and umpire manager Marelize de Klerk, the course was an eye-opener for the breadth of information presented by the course leaders and the enthusiastic approach of all the candidates.

De Klerk, who was the first female umpire to reach 200 international matches and umpired at three Olympic Games, said: “This course was well-presented and well-structured with specific outcomes. One learning outcome that I enjoyed was the emphasis upon the fact that the coach/umpire manager “Can Do” as a result of experiencing and exploring for themselves.”

The emphasis on self learning and self discovery highlighted by de Klerk was one of the points that drew most praise from the candidates when they gave feedback on the various courses. Throughout the course, candidates were given specific tasks that were within their level of competency but really challenged them to perform at their best.

For de Klerk, the courses are invaluable when it comes to developing hockey across the continent. “I am really excited that we can take this information back into our African hockey community and spread our knowledge about the game.

“The Umpire Manager seminar was an absolute eye-opener for me. Everyone was so keen to learn and share. It makes me think this is a field that we definitely need to explore and develop. Everyone was just a after as much information as they could gain.

“We cannot put a value on these courses and the difference they make to our African hockey family.”

And Ahmed Azmy, CEO of the African Hockey Federation added: “The courses that took place in Stellenbosch, South Africa alongside the “African Hockey Road To Tokyo 2020” tournament were very well organised. It attracted many candidates from around the continent and has proven to be very much appreciated by participants who seek knowledge to improve their officiating or coaching skills. The positive feedback came not only from the professional courses content and the capable educators but also for allowing practical sessions and engaging participants to interact with and learn from each other’s input during the courses.”