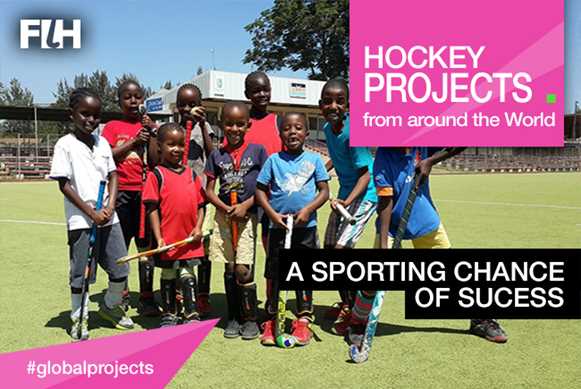 A sporting chance of success

An initiative in Nairobi is giving youngsters an opportunity to shine

Kenya’s international hockey aspirations are moving to the next level. With the men ranked 39th in the world and the women two places higher at 37, the African nation is a prime example of a country that will benefit from the opportunities offered by the Hockey World League.

With Kenya playing host to one of the Hockey World League Round One events, both young players and their parents have been able to see first-hand how hockey could offer a chance for talented young players to both pursue a sport to the highest level.

A man who is giving youngsters this opportunity, is Dutchman Erik van der Dussen, who has been working hard with local clubs and schools in the capital city Nairobi to ensure young people have access to top quality coaching.

Erik explains why he became involved in the project. “I got into the programme in January 2014 after meeting Tom Olal during a visit to the only artificial pitch in Kenya. Tom had started the initiative and he asked me to get involved. I had no hesitation, I love the sport and have played hockey since I was 10 years old.”

Erik had moved to Kenya through his work with Deloitte East Africa – one of the largest professional services firms in the world – and he says the company have been nothing but supportive of his work with the young hockey players.

At first the youngsters played with no socks, shoes or shin pads, but Erik was able to get equipment and sticks sent to Kenya from his club back in the Netherlands, Breda. In a swift response to his plea, friends from the club gathered more than 60 sticks, lots of balls and one man sent 30 pairs of shoes, shin pads and socks. Now, more than 30 young boys and girls turn up every Saturday from 8am until 11am for hockey coaching at the city park stadium, a time slot provided free of charge by the Kenyan Hockey Union.

The sessions consist of fitness, tactics, team-building and technique. Currently three coaches and an assistant work with the group. However, Erik and Tom discovered another, fundamental way they could help the young players. “We found out that a lot of young players were arriving hungry and were leaving 'starving'. So we arranged for fruit and water to be provided at the start of the training and we serve warm meals afterwards.”

Erik explained the ambitions that drive the project forwards. “We have several levels of ambition.

Firstly, it is about taking children out of their disadvantaged living circumstances and giving them a regular unworried experience. I believe that if you create a weekly fun morning and stimulate the children to make progress in sport, they have a reference that can help them stay motivated to go further.”

With the programme running for 16 months, Tom and Erik are seeing the results. Three girls have already made it onto the national under 16 development team, and all the children are making progress. The final goal is to deliver national team players and have a programme which combines sport and a quality education.

The programme is funded by three Dutch sponsors and Erik also pays tribute to the work and support of the Kenyan Hockey Union. He explains how one piece of sponsorship came about: “At a certain point I received second hand team shirts for my boys from Hockey Club Breda. They had the sponsor’s names on it, so I sent the 'sponsors' a picture. They were not aware that the shirts had been recycled and they liked it so much that they became sponsor on the rebound.”