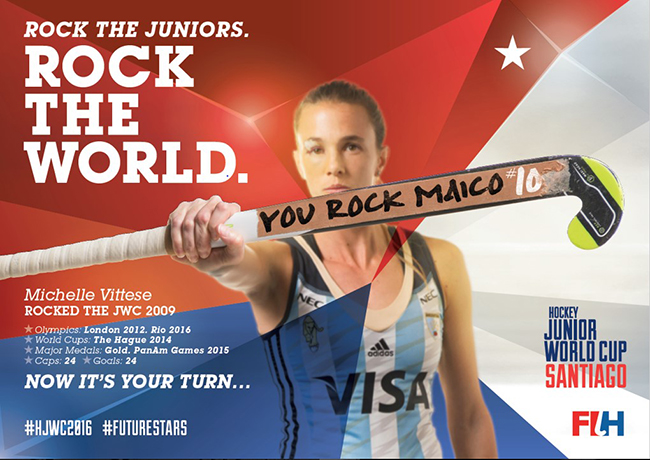 The Hockey Junior World Cups in 2016 were the best ever. Fact!

The Uttar Pradesh Hockey Junior World Cup Men Lucknow 2016 welcomed over 22,000 spectators to witness the final alone. This was on top of the 40,000 fans who had come through the gates for the previous nine match days.

On the other side of the world more than 30,000 spectators filled the stands throughout the week to watch the world's best women's hockey teams go head to head in Santiago.

Livestreaming and TV broadcasts took these events much beyond Lucknow and Santiago however, with millions able to tune in through the various platforms showing the live action from India and Chile.

Both hosts played a crucial role in marketing their events. Hockey India once again undertook a comprehensive campaign both pre, during and post event as they looked to make their event 'Big, Bold, Packed and Loud'.

The use of FIH event branding throughout all of their content as well as extensive stadium dressing gave the event a consistent look and feel which fans became familiar with whether they were watching at home or in Lucknow.

Working with preferred ticket supplier ticketgenie.in, regular reminders were posted on both Hockey India and FIH social media, whilst Hockey India also ran a number of event previews profiling the athletes and teams taking part. This included video messages offering support and advice from members of their senior team.

During the event, in addition to fixture and results information, Hockey India also posted GIFS (short animated images), photos and competitions to engage with fans.

Offline, ticket offices across the city advertised the event along with outdoor advertising and TV adverts from FIH Media Partner Star Sports. 12 large screens were also set up across the city of Lucknow for the tournament and LED screenings were done in other cities across the State of Uttar Pradesh including Meerut, Agra, Mathura, Aligarh, Rampur, Banaras, Allahabad, Kanpur, and Noida – DND.

A stunning opening ceremony, DJs, pyrotechnics and a variety of other in-event entertainment also delighted fans in the stands who turned out in their thousands over the week, cheering on both the home team and the 15 other competing nations.

All of this created a buzz throughout the city and across India as fans followed their nation's journey to the title. Undoubtedly their support played a significant contribution to India's success.

Chile too undertook a strategic marketing campaign which capitalised on their nation's home matches. They employed several tactics to bring in the crowds, one of which was a national outreach programme targeting hundreds of hockey clubs across the nation with special offers.

Like India, a schools programme also saw vast numbers of children exposed to the sport throughout the event. In Santiago, many of them got to try out the sport with FIH Official Supplier Polytan on their specially constructed mini-field in the spectator plaza.

Foreign fans and families of the athletes also turned out in force, South America proving a popular destination, especially for those travelling from the cold winter weather in the northern hemisphere. For those who could not attend, they were able to watch every match via a livestream.

Chile also relied on in event-entertainment which had a significant impact on word of mouth. Spectators were treated to a hockey event's first ever helicopter fly-over, dancers and DJs throughout the week and the Kia inflatable wheels used for half-time spectator races on the pitch, all of which got people posting on Facebook, Twitter, Instagram and Snapchat.

Throughout all of this, the hosts consistently used FIH event branding, giving fans a consistent look and feel throughout the event.

Whilst both hosts were excellent in promoting these events on a local level, all of the participating nations also worked hard to promote their involvement in these events.

FIH sent each team participating team kits to help them promote via social media posts, while they were also encouraged to join FIH's 'Rock the Juniors, Rock the World' campaign. This celebrated hockey stars who shined on the junior stage and went on to gain notable achievements on the senior stage.

By engaging the likes of Olympic gold medallist Shona McCallin from Great Britain, Argentina legend Luciana Aymar and Olympic gold medallist Gonzalo Peillat, Germany's Christopher Ruhr, USA's Michelle Vittese and India's Manpreet Singh, to name a few, they offered messages of support to athletes and teams. Fans were also asked to join in by posting their own messages of support to the teams.

These events provided great examples of how hosts, participating teams and the sport's governing body can work together to create buzz and engagement around an event.

They all demonstrated that branding used on a global level can also be adapted and used just as effectively on a local level. This approach gives events a consistent look and feel across all stakeholders content and materials, giving fans confidence in what they are consuming.

Activity like this is a clear example of the benefits of joined-up global marketing, a key component of FIH's 10-year Hockey Revolution strategy aimed at making hockey a global game that inspires the next generation.