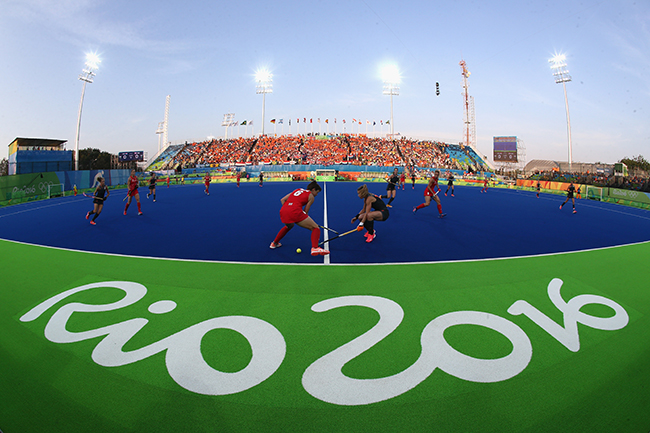 Can it get any better than that? The question on hockey players and fans lips as the lights went down in the Deodoro Stadium at the end of the Rio 2016 Olympic Games..

From the blue, green and white Polytan fields, which were so vivid on TV screens, to the carnival atmosphere in the Olympic Park, to the fans around the world glued to their televisions, computers and smart-phones - this was hockey at its very best. Big, bold, loud and watched by millions both in the stadium and at home.

And the hockey itself was tremendous. This is a new era for hockey. Players are as athletic as any man or woman in any sport. Trained in endurance, speed and strength, these are elite sporting heroes whose fitness is phenomenal. And the levels of skill on display was quite literally breath-taking.

Who can forget the amazing come-back by the German men against New Zealand in the Quarter-Final when they scored three goals in four amazing minutes to snatch their win; or the agonising shoot-out defeat suffered by Germany’s women against the Netherlands. The players dazzled fans with their stick skills and took us on an emotional journey through their successes and defeats.

For Great Britain women, this has been a journey into a new relationship with the public. The BBC voted the team’s victory in the final shoot-out as the best 'Moment of the Games' and since returning to the UK, the team has been bombarded with appearances and interviews across a range of television and radio shows, magazines and newspapers. England Hockey’s Facebook reach increased by 1,267 percent in August and Twitter mentions increased by 3,300 percent in the same month.

And all of this took place in a country where hockey has not been a dominant sport.

Brazil men qualified for the Olympics and their matches were supported fervently by the Brazilian fans. But those same fans were equally passionate about any team that was playing.

The tempo rose yet another notch when Argentina took to the field as continental loyalty kicked into play and the men’s final, in which Argentina defeated Belgium, created a cacophony of sound that could be heard miles away. But this was a fan base that simply appreciated top quality sport and the accompanying levels of stadium entertainment.

Four months on and hockey still maintains a golden glow that reflects a truly momentous event that cannot fail to provide inspiration to the next generation.

The Rio 2016 Olympics created an outstanding environment for hockey to shine  and gives other 'developing' hockey nations hope that this sport, if given the best platform, can create a long lasting legacy much beyond the host country's borders.