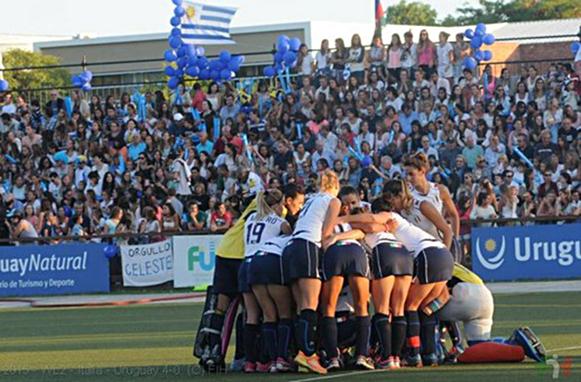 With the Hockey World League Finals currently taking place, many fans are already looking forward to season three that will kick off in 2016. As we look forward to big, bold, packed and loud events, let's remember the inspiration that Round 1 and 2 hosts gave us this season.

Round 1 of Season 3 of the Hockey World League will see joint men’s and women’s events held in Accra (Ghana); Singapore (Singapore); Prague (Czech Republic); Salamanca (Mexico); Chiclayo (Peru) and a location in Oceania that will soon be confirmed. In addition to the joint gender events, another women’s competition will take place in Cambrai (France), while Antalya (Turkey) and Glasgow (Scotland) will host men’s competitions. These host mark a historic occasion for both Peru and Turkey who will hold their first ever FIH events, a clear indication of the rapid development of hockey within these nations.

As fans and players alike start to look forward to the third season of the Hockey World League, these host cities and national associations are hard at work planning for their events and how they will make their mark in hockey!

For inspiration, we wanted to take a look back to remember the excellent hosts from Round 1 and 2 of the 2014/2015 edition of the Hockey World League.

In 2014, the FIH challenged Round 1 and 2 Hockey World League hosts to stage innovative sports events, with prizes on offer to those who either excelled in the promotion of their events or for those who created the best looking events.

The incentive was provided to encourage and empower hosts to do all that they can to help make their events exciting and entertaining for everyone involved in them - from athletes and officials to the thousands of spectators who attended.

Following reports and feedback about each event, two hosts were awarded with prizes.

Round 1 hosts Siauliai in Lithuania were the first to receive a prize after their efforts resulted in exceptional media attendance. This translated into widespread coverage - not only in terms of traditional media but also through social media as well.

Sveti Ivan Zelina in Croatia also picked up a prize for outstanding promotional activity throughout the city in the lead up to the tournament, including a number of giant billboards, which resulted in hundreds of fans coming along to the games each day.

Round 2 host Montevideo in Uruguay received a prize as they also ensured their event was packed-out. A key contribution to this was the thousands of passionate fans who turned out to cheer on their national hockey team throughout the competition.

Dublin, Ireland also brought a lot of attention to their event, helped by the visit of Irish President, Michael Higgins. They also engaged extensively with the local community as their women's national team visited local schools, promoting the event and inspiring hundreds of young people to get involved in hockey.

New Delhi in India was the third Round 2 host to be rewarded, primarily for their high level of organisation, which led to an extremely enjoyable event for both athletes and spectators. This in turn helped promote women's hockey in India, inspiring many more women to get involved in the sport.

Congratulations again to these, and all the other fantastic hosts for the 2014/2015 edition of the Hockey World League. All of this effort brings new people to our events which gets them inspired to follow hockey.  Season 3 hosts – the challenge is on: how will you make your mark?