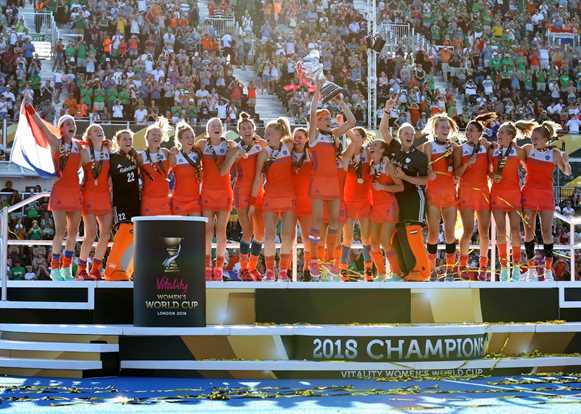 Relentless and magnificent. The Netherlands have absolutely owned the Vitality Hockey Women's World Cup since their opening 7-0 scoreline against Korea.

The women in orange might have been slightly stunned by the reception their opponents received as they walked out for the final but then it was business as usual – except in this case, the word 'usual' is a synonym for unparalleled excellence.

If ever a World Cup title was warranted, it was this one and the question every other coach has to be asking is "How do we beat the Dutch?"

London turned green for the afternoon as Ireland women played out the final chapter of their fascinating World Cup journey. The crowd sang the Irish national anthem with a pride and a passion that moved even the most neutral of spectators and the Netherlands were, for just a moment, a sideshow to the main event.

Then the action started on the pitch. Every Irish pass was greeted with a roar of approval. A heavy tackle by Caia van Maasakker was booed, albeit with an undercurrent of humour. But this is the Dutch and it was going to take a lot more than a noisy crowd to put them off course.

For Chloe Watkins and Eva de Goede, this final was a particularly special occasion as both players were representing their respective nations for the 200th time.

Ireland started brightly, with the excellent Nikki Evans showing the confidence to take the Dutch on and create opportunities for her team mates. Gradually though, the Dutch felt their way into the game and, as is their style, a sweeping team move allowed Vitality Best PLayer Lidewij Welten to give them a lead in the seventh minute.

After the quarter break it was again a team move that doubled that lead. Frederique Matla took the ball down the Dutch right-hand side of the pitch, before slipping to Xan de Waard. Her shot was weak and dealt with easily by Goalkeeper of the Tournament Ayeisha McFerran but the rebound fell to Kelly Jonker who made no mistake as she shot home with a clipped backhand shot.

Netherlands began to turn the pressure up, winning two penalty corners in quick succession. Unusually for the world number one team, the shots failed to produce goals, but this was rectified a few minutes later as the tournament's Top Scorer Kitty van Male pounced on a rebounded effort from van Maasakker and shot home for her eighth goal of the tournament.

With just 30 seconds left on the clock, Malou Pheninckx unleashed a shot from the edge of the circle that flew into the top corner of the Ireland goal. McFerran, who has been so excellent all tournament could do nothing about the rocket of a shot – Pheninckx's third goal for her nation and her third of this tournament.

The half time break gave Graham Shaw a chance to regroup his shattered troops but it also gave Alyson Annan an opportunity to put her foot down even more firmly on the pedal.

"We deservedly won, we played the best hockey throughout the tournament and this was shown today." Alyson Annan, Netherlands Head Coach

The Netherlands came out with every intention of making each attack count and just two minutes into the half, Marloes Keetels was on hand to knock the ball into the goal after another defence splitting run by Welten.

Caia van Maasakker finally found her groove as she scored from the penalty corner – her third of the tournament. The shot was perfectly placed just out of McFerran's reach.

Irish hopes were lifted for a moment when a Netherlands penalty corner broke down and a quick move saw the Deirdrie Duke alone with just one Dutch defender. A lot is said about the Netherland's attack but on this occasion it was the defence that showed its class. Irene van Assem made the tackle and the danger was averted with composure.

And so to the last 15 minutes of this compelling story. The Netherlands were within touching distance of the trophy for an amazing eighth time, and for the second consecutive edition. But Ireland had played their own part in this story too.

As one highly ranked team after another had fallen by the wayside, the story just got more amazing and that is why millions were tuning in across the world and the stadium was full of people determined to see how the final chapter panned out.

With their total domination of the sport since 2016, harking back to a single loss in July 2017, the Netherlands are one of the best sports team in the world at the moment, but for sheer exhilaration, this World Cup also belongs to the teams that overturned the rankings and entertained the crowds for 15 glorious days of hockey.

The final score of 6-0 is an all-time record for World Cup finals, and it is a signal to the hockey world that the Netherlands have set the bar very high indeed.

Ireland's inspirational captain Kathryn Mullan reflected back: "It was a tough, tough game. We prepared as we did for all the other games. The turn around time was tight and we knew it was going to be a real physical effort from us and we weren't perhaps as fresh as we would have liked. But credit where credit is due, the Dutch are phenomenal.

"We may be disappointed when we look back at the game as to how they got in, but the better team on the day won. The effort my teammates put in was brilliant.

"It's tough right now, but in a few weeks or month we will look back with pride. We came in ranked 16th and we wanted to cause an upset. I'm wearing a silver medal, so we have definitely caused an upset."

Netherlands' Frederique Matla, said: "This is my first world cup so I am really excited. We set out to attack. We knew they had nothing to lose but we knew we just had to play our game."

Netherlands Head Coach Alyson Annan said: "We deservedly won, we played the best hockey throughout the tournament and this was shown today.

"There are things we have taken from this tournament that are not good enough and we need to improve on those. Some attacking things and our finsihing also needs to be improved on." "There are also some defensive things that need to be improved."

Asked how she would beat the Netherlands if she were head coach to another nation, the World Cup winning coach said: "That is a question I have set myself – that is my homework."