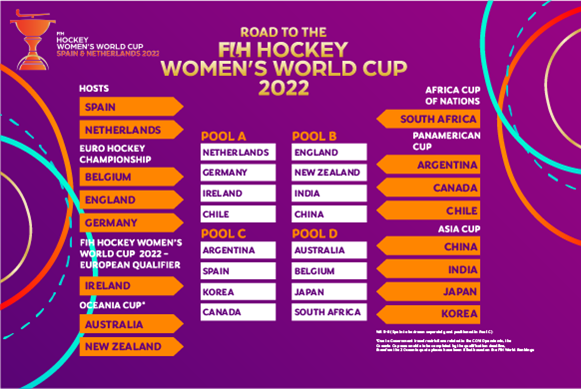 Terrassa, Spain: The path to glory at this summer's 2022 FIH Hockey Women’s World Cup Spain & Netherlands was laid out as the draw for the group stages took place today in Terrassa at the National Museum of Science and Technology of Catalonia.

The 2022 FIH Hockey Women’s World Cup (1-17 July 2022) will be jointly hosted in Terrassa, Spain and Amsterdam, Netherlands as 16 qualified teams pursue the biggest and most cherished prize in hockey alongside the Olympics. This is where legends are made with the world’s finest players battling it out to become the very best.

The draw itself was conducted by FIH CEO Thierry Weil and Spanish legends Berta Bonastre – who will be the Tournament Director – and Santi Freixa who links both venues, growing up in Terrassa and living currently in Amsterdam.

Pool A is headed up by world number one side – and reigning champions – The Netherlands (FIH World Ranking: 1) who will meet Ireland (WR: 12) in a repeat of the 2018 World Cup final. They will also be joined in the group by Germany (WR: 5) and Chile (WR: 17); the South American side will be competing in their first ever World Cup campaign.

In Pool B, England (WR: 3) are the top seed and they were drawn to face India (WR: 9) with many of the potential players having met each other in the Tokyo Olympics bronze medal match when the former were representing Great Britain. New Zealand (WR: 8) and China (WR: 14) complete their group with both playing in their ninth World Cup. Pool A and B will both be hosted at the Wagener Stadium in the Netherlands.

Pool C will feature two-time champions Argentina (WR: 2) at the head of the group. They will come up against Spain (WR: 6) in front of their home Terrassa crowd along with Korea (WR: 11) and Canada (WR: 13), who will play in the World Cup for the first time since 1994.

Pool D will also take place in Terrassa. Australia (WR: 4) are the highest ranked side and will be seeking to win their third World Cup title following success in 1994 and 1998. They face Belgium’s rising Red Panthers (WR: 7), Japan (WR: 10) and African champions South Africa (WR: 16).

At the draw, the tournament’s mascot was also revealed. This lovely dragon symbolizes the values of women in Hockey: passion, strength, wisdom, change, courage, vitality, protection and majesty.

We invite every fan around the world to suggest a name through a contest from February 17th to March 18th. The chosen name will be revealed on March 23rd. The voting platform link is: https://bit.ly/WorldCupMascot

Tickets for the competition will go on sale on March 1 via https://www.terrassa2022.com/ and https://wkhockey2022.com/

Xan de Waard (NED): “It was very exciting – I am really looking forward to playing Chile because I have never played them before. Our preparation is on track and we are improving every day. We had a really good training trip to Valencia for training and now we are in Mannheim so we are looking forward to playing more Pro League games and hopefully we will be ready when the World Cup comes.”

Charlotte Stapenhorst (GER): “We’ve just started our new journey with Die Danas team. Obviously, we are looking forward to the World Cup and the main goal is to get to Spain ; we start against Holland in front of their home crowd which will be a really nice start. I don’t think I have ever played against Chile so that’s going to be pretty cool. Going to Spain is the main goal.”

Camila Caram (CHI):  “We are very excited to play in our first World Cup, especially against the Netherlands, our host, where we are anticipating a very full stadium and also Germany and Ireland.”

Katie Mullan (IRL): “We’re so excited after watching the draw for the World Cup this summer. It will be fantastic to play the Netherlands in their home stadium and to face Germany who we played last year in Tokyo. We know Chile are an up-and-coming team and will be very well prepared this summer so that will be another brilliant game to look forward to. We are super-excited, see you in July!”

Hollie Pearne-Webb (ENG): "Super excited for the World Cup this summer. Now the draws have been done and now we know what Pool we are playing in, can't wait to get out there in Holland and start this campaign."

Megan Hull (NZL): “I have just watched the live draw and am feeling really excited about the event. We are in a strong pool with England, China and India so we will really look forward to the challenge of those games and relish the opportunity to train here at home and put in as much hard work as we can to prepare for the event. I want to acknowledge the organization and everybody that has worked so hard to make this event a possibility and create the World Cup atmosphere. We are sincerely thankful for all your efforts and look forward to seeing you in July.”

Cui Qiuxia (CHN): “We are excited about the hockey World Cup in July. We haven’t played many international matches after the Olympic Games and I think this World Cup will be a big journey for players around the world and I look forward to that. I hope to bring our best performance for our hockey friends and I hope everyone will watch on and cheer for us!”

Savita (IND): “It’s always exciting and so we are exciting and happy that we know which teams we are in the pool with. For example, we have already played Pro League games against China and know how to play against them. England, also, we also met them twice in Tokyo; New Zealand in 2018 and 2019, we faced them. For us, though, it doesn’t matter who we face because in the World Cup and Olympics, every team is good and so we focus more on ourselves. I believe we have improved a lot in the last two years, did well, and now we can do more in this World Cup.

Rocio Sanchez (ARG): “We are very excited and proud to participate in this World Cup. We hope everyone can take part in this great event so that, together, we can show the best hockey.

Gigi Oliva (ESP): “It’s great, it means we can start preparing for facing Argentina, Korea and Canada. Obviously it will be a really difficult group with very different styles of hockey.”

Maria Lopez (ESP): “We have a lot of new players and members of staff. We are very excited to play in the Pro League which gives us a chance to grow as a team before the World Cup.”

Natalie Sourisseau (CAN): “it’s very early in the morning here in Canada but we watched the draw live here as a team, going into Pool C with Argentina, Spain and Korea. We are looking forward to playing some teams we don’t get to play so often as well as one of our Pan-American rivals that we do play often! More than anything, we are looking forward to playing the tournament, playing in the former Olympic stadium and see what a great and exciting event this will be and what a great host Terrassa will be.”

Cheon Eunbi (KOR): “We are happy to participate in the World Cup; we will make sure to work hard to make sure to get a result.”

Jane Claxton (AUS): “I am really excited to find out our World Cup pool. We’ve got Belgium, South Africa and Japan. Japan are coming off an Asia Cup win, Belgium after an excellent start to the Pro League against Argentina and South Africa we played in the a tournament leading up to the Olympics and they had some great talent. It will be a very exciting pool to watch. We came fourth at the last World Cup so we definitely want to come away with a medal this time and the girls definitely have a fire in their bellies to prove something after our Tokyo performance. We haven’t had an international game since Tokyo so we will be busting to get out there to see what we can do on the international stage once again.

Yuri Nagai (JPN): I am very excited to be at the World Cup and playing against some of the best teams in the world. I am grateful that the tournament will be held during these globally difficult times. I hope our performance will leave a positive impact on spectators throughout the tournament. We are prepared to give our best in every match and we want to show the world who we are. Look out for Sakura Japan!

Quanita Bobbs (RSA): “We are in a very tough pool but are excited by the challenge ahead. Our aim is to compete in every game and prove to everyone we deserve to be on this stage. See you in 134 days."

Alex Gerniers (BEL): “We are super happy to have a big tournament just around the corner. We watched the draw together with the team and have a pretty exciting group with different styles of hockey. We know that in a tournament, everything can happen. For the moment, we are working really hard but have a few months to work on the little details to be as ready as possible for the World Cup and hopefully we can end the tournament with a good result! See you in a few months, hope to see you there.”