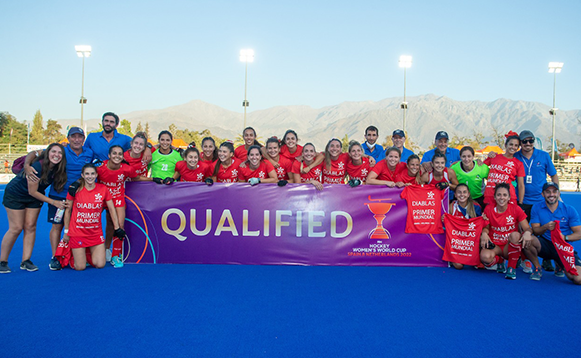 History was made in Santiago at the Women’s Pan Am Cup as the host nation Chile secured their first ever qualification for the FIH World Cup.

It was double joy for both semi-final winners as Argentina and Chile sealed automatic qualification spots at the FIH Hockey Women’s World Cup, Spain and Netherlands 2022 and also booked their places in the final of the 2022 Pan Am Cup – a fixture that is a repeat of the 2017 Pan Am Cup.

While the whole of the Chile hockey contingent celebrated the momentous achievement, Argentina’s captain Agostina Alonso enjoyed her own moment of celebration as she was awarded her 100th international cap.

With three qualification places available for teams from the event in Santiago, Chile, whichever teams qualified for Saturday’s final knew they would also be travelling to Europe for the blue riband event in July. The third spot will go to the winner of the bronze medal match – either Canada or USA.

In the first semi-final Argentina (FIH World Ranking:3) faced the second ranked team in the tournament Canada (WR:14) to determine who would advance to Saturday’s final. History was heavily on Argentina’s side as they remain unbeaten in all five previous editions. For their part, Canada women have never achieved higher than third place at this event and in the last edition in 2017 they finished fourth.

That said, Canada were determined to take the match to the reigning champions and it was a fast-paced and hard-fought first half. Argentina created more chances, including four penalty corners, but Canada goalkeeper Rowan Harris and her defence held strong in the face of a Leonas onslaught. 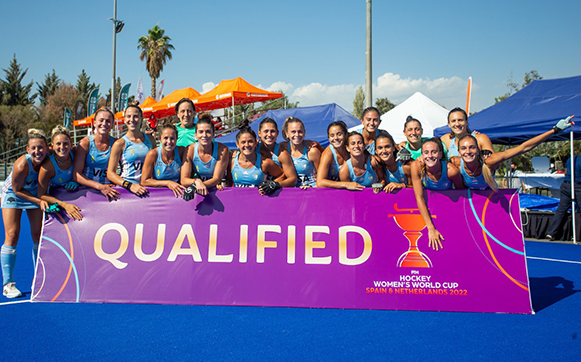 It was Argentina’s fifth penalty corner that broke the deadlock. Eugenia Trinchinetti slotted home to give her side a 1-0 lead just after play resumed in the second half. Jimena Cedres opened her account for Argentina with two goals in the fourth quarter; both goals came from open play and the second goal involving an exquisite piece of skill to lift the ball past the defence and into the net.

Speaking after the game, Maria Granatto said: ‘Well, we've just accomplished our main goal, being in the top two of the tournament and getting the ticket to attend the World Cup.

‘Now we are going to play the final in the shirt we train so hard for and love so much. And now we have  qualified for the World Cup, we are very calm and confident about our team. It's truly a tremendous joy for us and the team is very happy.’

‘Whoever we face in the final, we will be very focused. we know that if we keep mentally focused we can maintain our game and we have trust in ourselves. This will make it very difficult for our opponent. So, we are very calm and confident in this tournament, we advanced step by step and the biggest one – qualifying – well, we've already done it.’

The second semi-final saw USA (WR:15) take on the host nation Chile (WR:17) in what had all the promise of an exciting and competitive match.

USA had enjoyed a good tournament to this point, winning all three games with conviction. Chile had lost their opening game to Argentina and then beaten Uruguay to finish second in the pool. An 11-0 win over Trinidad and Tobago had secured Chile a place in the semi-finals and a chance to qualify for the World Cup.

The game started at a brisk pace, with Chile looking the more attack-minded in the opening exchanges. A double save from USA ‘keeper Kelsey Bing prevented Chile from taking the lead after a good spell of pressure towards the end of the second quarter and the first half remained goalless.

The first 14 minutes of the second half was much of the same. Chile kept piling on the pressure and USA looked solid in defence. However the breakthrough came when Camila Caram – who had been a dynamo for Chile throughout the match – swept the ball goalwards from a penalty corner. Domenica Ananias was on hand to tip the ball past Bing to give her side a precious lead.

Excitement was building around the ground as Chile sensed a historic win but USA are nothing if not determined. Head Coach Anthony Farry pulled the ‘keeper from the pitch and the USA surged forward. With less than two minutes on the clock, Erin Matson unleashed a reverse stick shot that flew into the goal and gave the team the equaliser.

In the shoot-out, Claudia Schuler in the Chile goal proved herself up for the challenge as she saved the first four USA attempts, sealing the Diablas’ historic qualification.

Speaking after the match, Schuler said: 'We are so happy with our performance and qualification to the World Cup today. This is historical for Chile, we've been training shoot-outs for a long time. Our next match, the final, is going to be very difficult, we know Argentina very well, and we will give our best to win that match.'

The final day of action at the Women’s Pan Am Cup will take place on Saturday 29 January. Argentina will play Chile in the gold medal match, while Canada take on USA for that final coveted World Cup qualification spot.