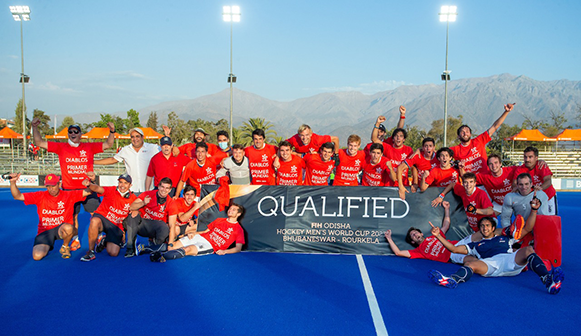 It was World Cup joy and a piece of history at the end of two scintillating semi-finals at the 2022 Men’s Pan Am Cup in Santiago, Chile.

In the first semi-final, reigning champions Argentina hit top gear to put an end to Canada’s hopes of an automatic qualification for the  FIH Odisha Men’s World Cup Bhubaneswar and Rourkela 2023. The final score of 5-2 underlined Los Leones continued dominance in this event.

Then a tense, hard-fought match between Chile and USA saw Chile win the shoot out in front of ecstatic home supporters, joining their women’s team in qualifying for the FIH World Cup for the first time in their history.

The two winning teams will now compete in the final of the Pan Am Cup, to be played on Sunday, while Canada and USA will play for bronze in the earlier match that day.

To that point Argentina had beaten Brazil (WR:34) and Chile (WR:25) to top their pool, while Canada had won their matches against Trinidad and Tobago (WR:48) and Mexico (WR:32) but had lost a tight encounter with USA (WR:22).

The first quarter saw the two teams testing each other but with little meaningful goalmouth action. That changed in the second quarter as both teams began to seek for an opening. Argentina were first to strike when Jose Tolini sent a penalty corner flying into the Canadian goal. This was a rare error by Antoni Kindler in the Canada goal; to that point he had played an impeccable game and made several crucial saves to keep his side within touching distance of Argentina.

The damage to Canada was done in the third quarter when Tolini scored his second penalty corner goal and Frederico Fernandez pounced on a loose ball after some clever 3-D skills by Tomas Domene saw the striker dribble the ball mid-air along the baseline, evading defenders on his way.

It was Domene himself who scored the fourth for Los Leones. From the baseline, he played a tantalising ball through the air and a Canadian defender turned the ball into the net, wrong-footing Kindler in the process. 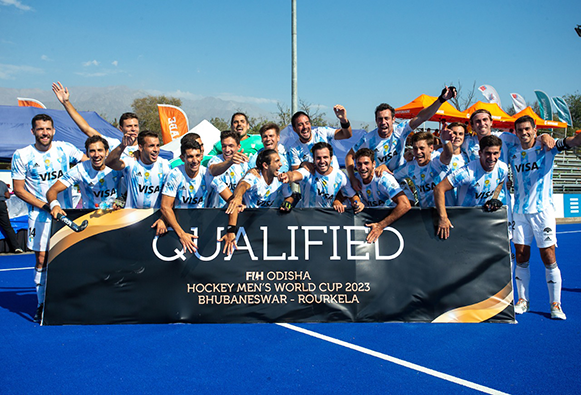 With five minutes to go, Argentina could be forgiven for relaxing a little but Canada are an obdurate force. Head Coach Pasha Gademan pulled Kindler from the field and instantly Canada scored two goals - first Devohn Noronha from a penalty corner and then Matthew Sarmento from open play. It was enough to spread a sense of panic through the Argentina ranks but the team rallied and were able to win penalty stroke after a swift counter attack. Maico Casella scored from the spot with composure and seconds later Argentina could celebrate a 5-2 win, a place in Sunday’s final and the coveted World Cup qualification.

The second semi-final was always going to create history as neither protagonist – USA or Chile – had qualified for a World Cup before.

The first half was high tempo, with plenty of action in both circles but no goals to show for the athletes’ efforts. Both Jonathan Klages in the USA goal and Chile’s shot-stopper Adrian Henriquez were called into action frequently and made athletic saves but neither side was clinical in its finishing.

The second half was played in a similar vein. A high octane match with both sides working hard to break down the opposition’s attacking momentum. Chile’s Raimundo Valenzuela came closest to breaking the deadlock as he was millimetres from connecting with a cross in front of the USA goal after his team made a speedy break up the pitch.

With just a few minutes of the match left, Chile began to really push for the winning goal. Still the USA, marshalled by the vastly experienced Pat Harris, held firm and the match moved determinedly towards a shoot-out.

Kei Kaeppeller started well for USA but the remainder of the USA team were unable to find a way past Henriquez in the Chilean goal. In a mirrored result of Chile women's semi-final against USA the day before, Chile men triumphed in the shoot-out and became history makers as they earned the right to represent Chile at the FIH Odisha Men’s World Cup Bhubaneswar and Rourkela 2023.

Just how much this meant to Chile was demonstrated when Juan Amoroso was too emotional to speak after the game, tears of joy and disbelief during down his face.

Speaking after the match, Felipe Renz said: 'For Chileans this is historical, it has never happened before. Today it's time to celebrate with the team, but tomorrow we must focus on the game. It's a tremendous joy for the team. We will have a full year of training and self-commitment with this new goal.'