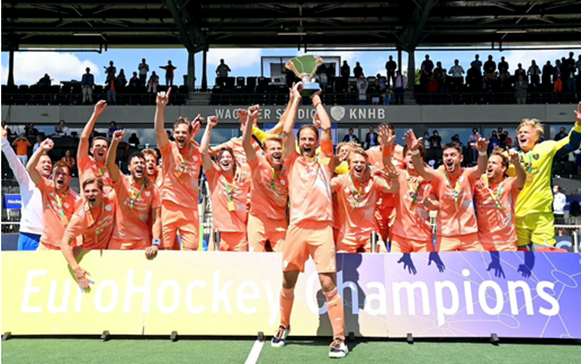 Goals, shoot-outs and a passionate, knowledgable crowd roaring every piece of skill in the Wagener Stadium in Amstelveen – the final day of action at the men’s EuroHockey Championship 2021 had it all. And for Head Coach Max Caldas and his Netherlands team, a winning performance in front of their fans was the perfect end to this EuroHockey adventure.

The Netherlands topped off an impressive 2021 EuroHockey Championship campaign with a scintillating display of attacking hockey as they beat Germany in a shoot out to take gold medal and seal their spot at the FIH Odisha Men’s Hockey World Cup India 2023.

Germany will also qualify for the 2023 blue riband event, as will bronze medallists Belgium, fourth placed England and Spain, who finished in fifth position despite losing 3-2 to France in the final match of their campaign.

The win by Netherlands was just reward for an outstanding performance that saw them come back twice from being behind their German rivals during the match. The ensuing shoot out was as near perfect as possible, with Pirmin Blaak stopping two of the German attempts before Jorrit Croon scored the winner, giving Max Caldas a final victory on home turf before he leaves for Spain after the Olympic Games Tokyo 2020.

The largely Dutch crowd of 3,000 fans in the Amstelveen Stadium played their part in this extraordinary final. But even the German fans and neutrals will have been hugely appreciative of a showcase of hockey by two teams at the top of their game.

The highly competitive tournament featuring some of the top teams in the world has also given a heightened sense among the wider hockey community of a gathering momentum towards the Olympic Games Tokyo 2020. Certainly, the players left everything on the pitch as they embraced this opportunity to play competitive hockey in front of knowledgable fans.

In the final, the first half was played at breakneck speed, and with a surprisingly open and cavalier approach as the ball flew from one end of the pitch to the other. While the Netherlands shaded possession, it was Germany who created more opportunities and Dutch goalkeeper Pirmin Blaak was called on time and again to make some remarkable saves.

The deadlock was finally broken when a foul on Benedict Fürk resulted in a penalty stroke. Christopher Rühr showed no hesitation as he slotted the ball neatly past Blaak into the corner of the goal.

The second half saw Robbert Kemperman restore parity as he dived on a loose ball and turned it into the German goal. This was the only goal of a third quarter that was epitomised by high quality attacking play and even higher quality goalkeeping by both Blaak and Alexander Stadler in the German goal.

A match full of action exploded into drama in the final four minutes. Germany took the lead when Constantin Staib jabbed the ball over Pirmin. Caldas removed his ‘keeper to gain an on-field advantage and with 10 seconds left Jip Janssen shot home a penalty corner to send the game to shoot-out.

Speaking after the shoot-out, Player of the Match Blaak praised his team and said that while he was sitting on the bench in the final seconds of the match, he had every confidence his team could equalise and they could go on to win the shoot-out.

In the bronze medal match earlier in the day, Belgium defeated England by a 3-2 scoreline. The scoreline reflected the nature of the game. While competition was fierce and England were slightly on top in the early stages of the game, the world number two team looked stronger towards the final whistle.

Belgium took the lead through a penalty stroke, converted by Tom Boon, in the first quarter, and that goal separated the teams going into the half-time break.

England’s Sam Ward brought the scores level just after half-time, only to see Thomas Briels restore his team’s lead a few minutes later. Tom Boon scored his second of the match to make it 3-1 and although Ward struck again with a fabulous penalty corner strike to make it 3-2, Head Coach Danny Kerry’s men were unable to break down the experienced Belgium side as the time ticked down.

While the top five placed teams can now look forward to taking their places at the FIH Odisha Men’s Hockey World Cup India 2023, there is a further opportunity to qualify for France, Wales and Russia.

These teams will join the teams that ranked 1-5 in the EuroHockey Championship II 2021 to contest the European World Cup Qualifying Tournament 2021. This event offers a further two places at the FIH Odisha Men’s Hockey World Cup India 2023.


Player of the Tournament

Goalkeeper of the Tournament