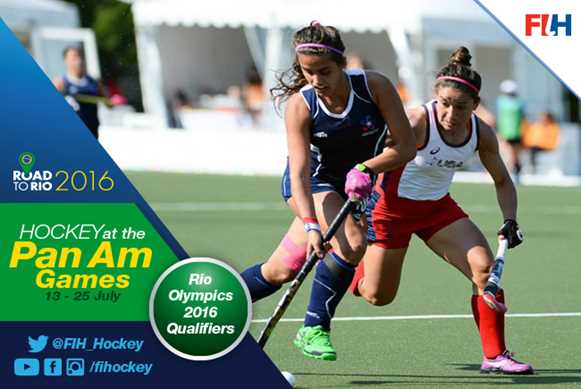 PAG2015 (W): USA and Uruguay record Pool B wins while Argentina win to top Pool A

Day two of women’s hockey at the Pan Am Games ends with wins for USA, Uruguay and Argentina

Day two of the women’s hockey event at the Pan Am Games has finished with wins for USA, Urgugay and Argentina.

The first match of the day was Chile v USA who both won their opening matches on day one. Here, the USA emerged the winners in a close match following a strong defensive display by Chile. Following them was Hockey World League Semi-Finalists Uruguay, against Cuba in another very close match with Uruguay winning 3-2. An evenly matched game between Mexico and the Dominican Republic ended in a 1-1 draw before Argentina beat Canada to remain at the top of Pool A.

In the opening minutes of the match, USA had a couple shots blocked by Chile’s keeper Claudia Schuler. Soon after, they then earned the first penalty corner of the match, but Rachel Dawson’s shot was blocked by the Chilean defence. Continuing to apply attacking pressure resulted in another penalty corner, this time Jill Witmer converted to give the USA the lead. After a lot of passing around their attacking half by USA, Paige Selenski found an opening to send a hard shot past Schuler in the 13th minute making it 2-0. Chile came back quickly on the attack but their two penalty corners were saved by the USA defence to end the first quarter 2-0.

The following three quarters saw an incredibly strong Chile defence with Claudia Schuler making some excellent saves. Both teams fought for possession throughout and the final quarter saw Jackie Briggs save two Chile penalty corners before the USA themselves had a penalty corner saved in the final minute to leave the score 2-0 at the end of the match.

The second match of the day burst into action as Uruguay earned a penalty corner in the opening seconds, although they failed to capitalise on their quick start. Uruguay kept up their attacking pressure and a few minutes later earned a couple more penalty corners that were again broken up by Cuba’s defence. Continuing to pressure hard on attack, Uruguay then scored through Constanza Barrandeguy in the 10th minute and ended the first quarter 1-0 up.

The second quarter began with Cuba on attack and they were rewarded when Yuraima Vera Rojas scored to tie the match. Both teams continued to try to attack and Uruguay earned another penalty corner in the 29th minute. Manuela Vilar’s shot bounced into goal to regain the lead for Uruguay and close the half with the score Uruguay 2, Cuba 1.

The third quarter started in an exciting fashion as Cuba’s Yaniuska Paso scored with a PC hit in the 32nd minute to tie the match 2-2. Both teams then continued to battle hard, but with neither able to break, the third quarter ended 2-2.

Uruguay pressuring on attack in the fourth quarter saw Uruguay’s Florenica Norbis find team mate Anastasia Olave and take the score to 3-2 and win the match for Uruguay.

The second quarter saw the first goal of the match when Cecilia Oflaherti scored for the Dominican Republic. Mexico had a penalty corner late in the second quarter but the score remained 1-0 at the end of the half.

Coming into the third quarter, Mexico dominated possession and were rewarded with a goal from Jessica Sanchez to tie the match 1-1. A minute later, the Dominican Republic had the chance to re-take the lead with a penalty corner, but the shot was too high.

The final quarter also started with Mexico dominating possession and pressuring on attack, but seeing their shots go wide. Fernanda Oveida had another shot in the 55th minute blocked by De La Rosa. The Dominican Republic responded with a flurry of attack in the final minute, but the match ended in a 1-1 draw.

First day winners Canada and Argentina in Pool A then took on each other on day two.

Canada dominated possession in the first minutes of the match but the Argentina defence held firm before Argentina earned three penalty corners. Canada prevented them capitalising on the first two but could not stop Argentina’s Noel Barrionuevo convert the third with her signature drag flick to make it 1-0 to Argentina.

Throughout the beginning of the second quarter Canada worked hard to go on the attack but couldn’t find the back of the net. Canada’s keeper Kaitlyn Williams then saved an Argentinian penalty corner but couldn’t keep out the next one for 2-0 to Argentina. This was followed by a fantastic save by Argentina’s keeper Belen Succi to prevent Canada pulling one back.

Then in the 28th minute, after a Canada player broke early on a penalty corner, Argentina’s Florencia Habif took advantage to fire a rocket past Williams and the quarter ended 3-0 to Argentina.

Both teams kept battling for possession in the third quarter until Argentina broke quickly on attack. Williams saved the first effort on her goal but could not keep out Agustina Albertarrio who followed up to take the score to 4-0 Argentina.

The first five minutes of the fourth quarter started quietly until Delfina Merino changed that with a shot in the 51st minute to give her team a five goal lead over Canada. Williams then made another great save before the match ended Argentina 5 Canada 0 and Argentina top of Pool A.