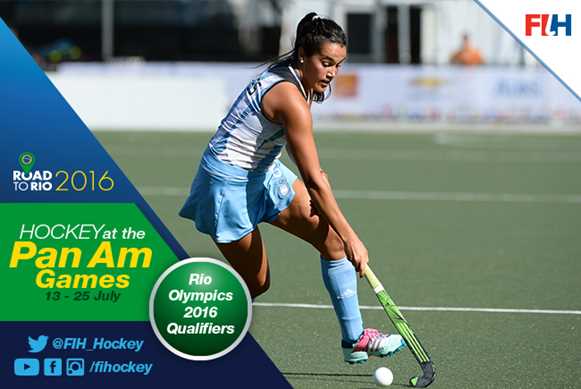 High scores were the order of the day at the Pan-Am Games as the women’s quarter-finals were played out in front of an enthusiastic crowd. Argentina and Chile both put 10 goals past their opponents, Cuba and Mexico, while the USA hit an imperious 15 goals past the Dominican Republic. The home side, Canada, had a tougher encounter against Uruguay but came through 2-0 winners.

The semi-finals, which will take place on 22 July, take on a north-south split, with Argentina facing Chile while north American rivals Canada will play the USA.

The first quarter-final match of the day was between Argentina and Cuba. Las Leonas wasted no time in making their intentions clear as Rocio Sanchez opened the scoring in the fifth minute through a well-taken penalty corner. Cuba’s keeper Heidy Gonzalez showed her ability between the posts as she denied Argentina several more scoring opportunities in those opening minutes, but Noel Barrionuevo (15’) was on hand to double her team’s score before the end of the first quarter.

The second quarter was no less intense as Argentina kept up the barrage on the Cuban goal. Sanchez converted another penalty corner opportunity in the 17th minute and Pilar Romang followed up with a reverse stick rocket three minutes later. Barrionuevo (22’) and Florencia Habif (24’) scored back-to-back penalty corner goals and Luciana Molina (25’) made it 7-0 when she scored past Cuba’s replacement ‘keeper Yusnaidy Bentacourt. It was Bentacourt and captain Mileysi Argentel who kept Las Leonas at bay for much of the third quarter, but even their valiant efforts couldn’t prevent Barrionuevo (43’) scoring her third, again from a penalty corner.

The fourth quarter saw Argentina camped in the Cuba circle. The final nails in the Cuban coffin went to the prolific Barrionuevo (51’) and hat-trick-scoring Sanchez (52’).

If Argentina got off to a quick start, Chile were blisteringly hot as they marched into the lead in the opening minute of the game through Carolina Garcia. Javiera Villagra followed up in the 11th minute and Mexico were left reeling.

The second quarter was saw Chile piling on more pressure, but Mexico battened down the defensive hatches and kept them out for the majority of the quarter. Manuela Urroz (24’) added Chile’s third goal and her first of the match when a penalty corner finally made it past the resilient defence and ‘keeper Jesus Castillo.

After the half-time break, Chile came out with fresh intent and four goals in the quarter put paid to the Mexican resistance. Like clockwork Urroz scored every 10 minutes, her 24th minute opener was followed by goals at 34 and 44 minutes. Francesca Vidaurre popped up with a goal on 37 minutes and Agustina Venegas (40’) also got on the scoresheet.

The fourth quarter was goalless, but by then Chile had sealed the match and secured their place in the semi-finals.

The USA were in rampant mood as they took on the Dominican Republic in the third quarter-final of the day. Despite the heavy scoreline, which had USA scoring an average of a goal every four minutes, the match was goalless until the ninth minute as a brave Dominican Republic defence kept the USA at bay.

It was Paige Selenski who opened the scoring with a shot that defeated the ‘keeper, Cindy de La Rosa, through placement rather than pace. Michelle Kasold doubled the lead in the 15th minute from a rebounded shot. Kelsey Kolojejchick scored twice (18’) and (28’) in the second quarter and she was joined on the scoreboard by Jill Witmer (20’) and Katie O’Donnell (26’) and, although Dominican Republic made a couple of excursions into the USA circle, particularly through the hard-working Agustina Birocho, it was really one-way traffic.

Kolojejchick’s (32’) third came from a penalty corner and just a minute later Katie Reinprecht fired a rocket to score USA’s eighth. Rachel Dawson (35’) found her drag-flick form and put the ball past de La Rosa and Kolojejchick helped herself to her fourth of the game. Stefanie Fee (40’) and Melissa Gonzalez rounded off a tremendous 15 minutes of attacking action for USA.

Still the Dominican Republic’s agony continued, with Katelyn Falgowski scoring in the 46th minute, Witmer scored her second and O’Donnell wrapped things up in the last minute to make it 15-0.

The final quarter-final of the day was a much closer affair, with the host nation Canada running out 2-0 winners over Uruguay. Kaitlyn Williams was the first ‘keeper to be called into action as pressure from the Uruguay attack kept the Canadians in their defending circle for the early minutes of the game. A goalless first quarter saw action and possession swinging from team to team.

In the second quarter Canada had the better of the chances, but Uruguay’s Rosanna Paselle was equal to the challenge and again the quarter ended goalless.

Abigail Raye broke the deadlock in the 37th minute when she lifted the ball over Paselle from a penalty corner. This swung the momentum of the game and for the remainder of the quarter, Canada were in the ascendancy. The game was put beyond doubt by Karli Johansen (50’) when she fired a penalty corner high into the Uruguay goal. Although Urugauy came back strongly, this was a lead that the home side were not going to relinquish.

Keep up with all the action on www.panamhockey.org