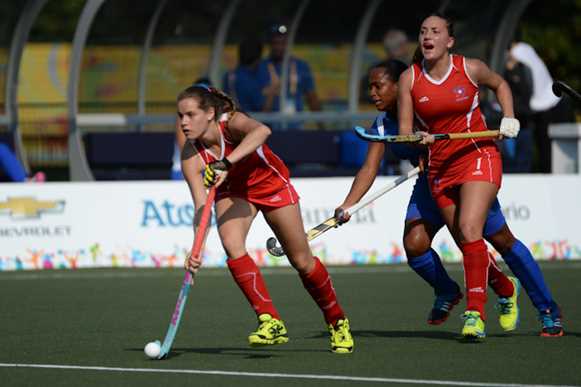 The women’s Hockey competition at the 2015 Pan American Games got underway on Monday, with Chile and USA both starting their chase for a ticket to the Rio 2016 Olympic Games by claiming Pool B victories at the prestigious event in Toronto, Canada. In Pool A, Argentina and Canada marked themselves as the teams to beat with convincing wins. More details on the matches can be found below.

Pool B
Chile 7-2 Cuba
Chile and Cuba were the first teams to take to the field at the University of Toronto, with Chile’s Caram sisters chipping in with three goals in a 7-2 win over their opponents. Daniela Caram scored a goal in each of the opening two periods before a double from Cuba’s Marisbel Sierra either side of a strike from Chile’s Javiera Villagra left the match delicately poised at 3-2 at half time. However, the Chileans asserted their authority on the match in the third and fourth quarters, with Carolina Garcia, Francisca Pizarro and Sofia Filipek on target before team captain Camila Caram completed the match scoring two minutes from time.

USA 5-0 Uruguay
USA made their Pan American Games title ambitions clear for all to see in their first match, powering to a fine 5-0 triumph over in-form Uruguay. Katie Reinprecht needed just two minutes to open the match scoring, with the two Michelles, Kasold and Vittese, both on target to take the score to 3-0 at half time. Katelyn Falgowski made it 4-0 six minutes after half time with a penalty corner with Kelsey Kolojejchick netting USA’s fifth goal in the 56th minute with a well-taken open play effort.

Pool A
Argentina 9-0 Mexico
Delfina Merino, Noel Barrionuevo and Agustina Albertarrio all hit doubles as Argentina cruised to a comfortable win over Mexico. Merino opened the scoring in the 7th minute before Maria Ortiz made it 2-0 ahead of the quarter time break. Las Leonas hit top gear in the second quarter, with Barrionuevo scoring the first of her two penalty corners ahead go a second for Merino and two strikes in three minutes from Albertarrio. Barrionuevo made it 7-0 five minutes after half time with Florencia Habif adding another a minute later. Team captain Macarena Rodriguez finished the scoring in the 58th minute with an field goal.

Canada 12-1 Dominican Republic
Canada recorded a big win against Dominican Republic to move to the top of Pool A on goal difference at the end of competition Day 1, with Stephanie Norlander and team captain Kate Gillis both hitting hat-tricks. It was a case of goal-scoring symmetry for the Canadians, who scored three times in each period on route to their win. Norlander, Gillis and Karli Johansen were all on target in the first period, with Norlander and Gillis both netting in the second period either side of of a Madeline Secco goal before Dominican Republic made the score 6-1 ahead of half time thanks to Benifer Moronta. Danielle Hennig, a third for Gillis and a second for Johansen took the score to 9-1 in the third quarter before Stephanie Norlander completed her hat-trick in the fourth quarter ahead of strikes from Thea Culley and a second for Hennig.