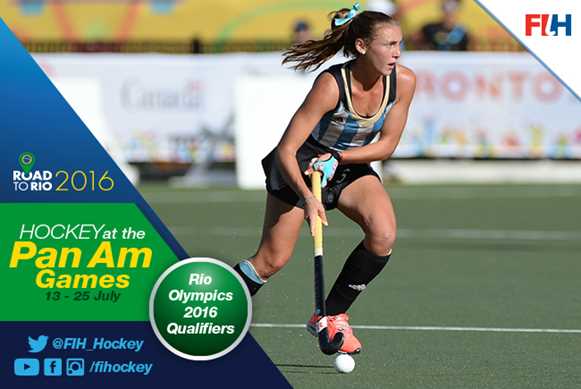 The second from last day of the women’s event saw the line up’s of the final day matches take shape.

More information on the results can be seen below.

In a very close match, with both teams evenly matched it was Mexico who came out on top.

The first quarter began with Cuba on attack but their shots on goal were just wide.  Soon after, the only goal of the game was scored when Mexico had a penalty corner. Michel Navarro found Cindy Correa to give her team the lead in the 10th minute.

Cuba fought to the end to level the score including winning a penalty corner in the last minute of the game but Mexico’s defence held firm to win the match 1-0.

Hockey World League Semi-Finalists Uruguay recorded their second win of the Games with victory over the Dominican Republic.

The Dominican Republic attacked from the whistle but it was Florencia Norbis who gave Uruguay the lead in the first quarter. The Dominican Republic quickly levelled through Magalys Ortega to make it 1-1 but Uruguay hit back with another goal from a penalty corner shortly after, again through Norbis and maintained this narrow lead till the end of the first half.

Less than a minute into the third quarter, Norbis was joined on the scoresheet by Cecilia Casarotti through another penalty corner and then by Mercedes Coates who beat two defenders to score and ensure Uruguay ended the third quarter 4-1 up.

Uruguay sealed their win with a flurry of three goals in three minutes in the fourth quarter. The goals coming from two more players as Manuela Vilar scored two penalty corners and Janine Stanley also found the back of the net. The Dominican Republic did not let up and were thwarted by some excellent saves from Uruguay keeper Paselle to prevent them from adding to their goal from the first quarter. The final score after this entertaining match was 7-1 to Uruguay.

Argentina’s Las Leonas continued their excellent form with a fine victory over Chile to secure a place in the final of the Pan American Games in Toronto. The result ensures that Argentina’s remarkable run of never failing to reach the Gold medal match at the Pan American Games remains very much intact, although they will be determined to win back the title that they lost in Guadalajara against USA.

Martina Cavallero netted twice in quick succession in the opening period to ensure that the world number three took firm control of the early stages, although they had to wait until the third period before the third goal arrived from the stick of Agustina Albertarrio. Delfina Merino completed the match scoring with goals either side of the quarter-time break to take the score to 5-0, sealing a comfortable victory for the undisputed queens of South American hockey.

USA women reached the Gold medal match of the 2015 Pan American Games with a 3-0 win over Canada, a result that secured their place in the Rio 2016 Olympic Games. Like fellow finalists Argentina, USA have been truly remarkable in defence in Toronto, having yet to concede a goal in any of the five matches that they have played in order to reach the Gold medal game.

Kelsey Kolojejchick opened the match scoring in the first quarter with a fine strike from the top of the circle, although Canadians Thea Culley and Stephanie Norlander came close to levelling the scores. Following evenly contested second and third quarters, USA finally gave themselves from breathing space when Kolojejchick bagged her second goal of the match and seventh of the competition, with Alyssa Manley putting the game to bed in the 58th minute to end the title hopes of the host nation.

USA and Argentina have met in seven out of the eight Pan American Games finals played to date, with Argentina winning the first six occasions and USA emerging triumphant at the 2011 Games in Guadalajara.  For Canada, their attentions will now switch to the 3-4 place play-off meeting with Chile, where both sides will be determined to end their tournament on a high by claiming the Bronze medal.