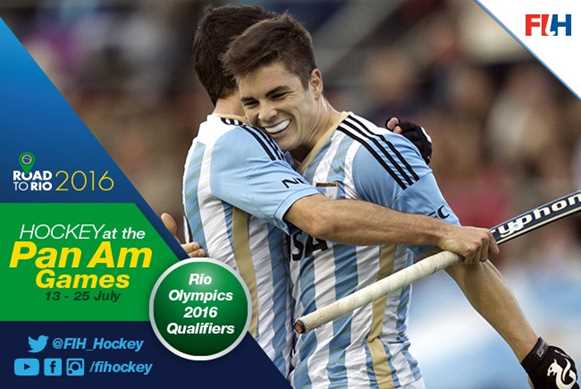 Pan Am Games: the contenders for the men’s hockey title

Eight teams, contesting one continental title and an automatic qualification spot for Rio 2016 – this is what the Pan-Am Games means to the competitors in the men’s hockey event, which begins today in Toronto, Canada.

We meet the teams as they prepare to do battle to become Champions of the Pan American continent.

They may have already qualified for the Olympics by virtue of a second place finish in the Hockey World League Semi-Finals in Buenos Aires, but Argentina – who are currently ranked sixth in the world – will not be taking their collective foot from the pedal.

The Argentine men have enjoyed a renaissance of late. They won bronze medal in the 2014 World Cup, finishing much higher than their then 11th-place ranking had suggested, and their subsequent rise up the rankings has served notice of their intent. In Gonzalo Peillat they have a drag-flicker extraordinaire and in Coach Carlos Retegui, they have a man who gives coherence, strategy and a solid defence to the team.

Cuba has form in the Pan Am Games. At the turn of the century the Cuban team won bronze in consecutive years – 1999 and 2003. Since then, the team has picked up a fifth place in 2007 and a fourth place in 2011. Four years ago, Cuba beat both USA and Mexico, despite being many places lower on the world rankings. They remain low on the rankings – 48th – but the ambitions of Coach Guillermo Stakemann and his team will burn bright. Cuba has one of the oldest teams – six of the squad are in their 30s and no-one is younger than 23-years-old.

The bad news for Trinidad and Tobago is an injury to their talisman Kwan Brown. The player, who coaches and plays at the highest level in England, picked up an injury to his achilles tendon that has left him on crutches. Browne will still be in Toronto but in a coaching capacity. Before his injury, Browne spoke of this Pan-Am Games being one that gave his side the best chance of qualifying for Rio. “The players have been together a long time now, so we have experience and we know each other well.” Trinidad and Tobago is ranked 29th in the world and finished 2011 in seventh spot.

USA men come to Toronto ranked 26th in the world, but with aspirations to achieve a podium finish. Patrick Harris is by far the most experienced player with 107 caps to his name, but with 13 of the players aged between 20 and 23, this will be a squad that is far more about energy and work rate than it is experience. In years gone by USA were bronze medal winners at this event, but the past three editions have seen two fifth place finishes and a seventh place.

As host nation for Rio 2016, Brazil need to finish sixth or above to be certain of qualifying for Rio 2016. This could be a challenge for the team as they have only qualified for the Pan Am Games on one previous occasion and they finished eighth then. However, there is an air of optimism in the camp and the lure of an appearance in front of a home crowd in Rio. In 2013, Brazil won their first ever hockey medal – a bronze at the South American Championships. Stephane Vehrle-Smith plays hockey in England but represents Brazil. He was part of that medal-winning team and says that this is just the start for Brazilian hockey.

Canada are the in-form team right now. A fourth place finish at the Hockey World League Semi-Final means that Canada’s Olympic dream remains very much alive. With an enhanced support team, a tough training regime and a higher level of commitment from the players, Canada will be eyeing, not just a podium finish, but a gold medal. With the excellent David Carter in goal and the experience of Scott Tupper, David Jameson and Mark Pearson – who all play domestic hockey in Europe – Canada are a team on top of their game.

Chile are a team that have real aspirations to move up the rankings. They are currently 25th on the FIH World Rankings, and a good performance at the Pan-Am’s will see them rise further. The head coach, Alfredo Castro expects Argentina and Canada to be on the podium, but he sees the USA as the main threat to Chile’s chances of picking up a medal. Castro says that Raimundo Valenzuelo and Felipe Eggers will be key players in Chile’s success.

Ranked 34, Mexico are the dark horses of the tournament. In 2011 they finished sixth, losing out in the 5th/6th play-off to USA, a team they had beaten in the pool matches. With experienced players such as Roberto Lopez, Moises Garcia and Ricardo Miranda in the team, Mexico are a side capable of pulling a surprise win out of the bag.