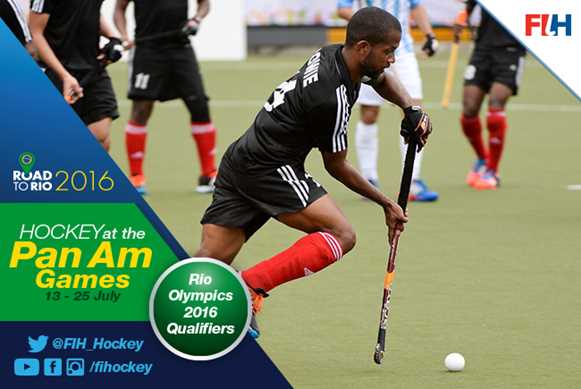 Following the start of the women’s competition at the 2015 Pan American Games on Monday, it was the men’s turn on Tuesday with the action beginning in Pool A. Argentina - who qualified for the Rio 2016 Olympic Games at last month’s Hockey World League Semi-Final in Buenos Aires - got their tournament off to a fine start with a convincing victory over Trinidad & Tobago, while Cuba produced a stunning fightback to snatch an entertaining draw with USA. In Pool B, Chile edged past Mexico while Canada claimed all the points against Brazil.

The coveted Pan American Games Gold medal comes with a direct qualification ticket to Rio 2016, ensuring that there is a huge amount at stake in this illustrious competition. More details on the matches can be found below.

Pool A
Argentina 11-0 Trinidad & Tobago
Despite the heroics of Trinidad & Tobago keeper Andrey Rocke on the occasion of his 100th senior international appearance, reigning Pan American Games champions Argentina proved themselves to be too strong for their opponents with a convincing victory. T&T shot-stopper Rocke was in terrific form to deny the world number 6 ranked team on numerous occasions in the opening 25 minutes before a penalty corner rocket from Gonzalo Peillat and a quick-fire double from inspirational attacker Lucas Vila established a 3-0 half time lead. Vila completed his hat-trick shortly after the break before team captain Matias Paredes and Nicolas Della Torre took the score to 6-0 ahead of a sensational five goal burst in the final four minutes of the match. Agustin Mazzilli started the flourish, with Peillat, Callioni (2) and Menini showing extraordinary finishing to take the score to 11-0.

USA 3-3 Cuba
48th ranked Cuba staged a remarkable fightback to secure a creditable draw against higher-ranked USA in their Pan Am Games opener, a result which shows that they are determined to surpass the 4th place finish that they achieved at the 2011 Games in Guadalajara (MEX). The Americans - ranked 26th in the world - powered into a 3-0 lead ahead of half time thanks to penalty corners from Moritz Runzi and Aki Kaeppeler with Will Holt on target from open play. However, the momentum of the game changed two minutes after the break while Maikel Tritzant bagged a penalty corner goal which gave his Cuban team-mates plenty of self belief. The drama really began to unfold inside the final ten minutes, with Yoandy Blanco becoming an instant hero with two crucial goals. Blanco made the score 3-2 with nine minutes remaining before snatching a last-gasp equaliser one minute from the end of the game to ensure that Cuba took home a share of the spoils.

Pool B
Chile 3-2 Mexico
Martin Rodriguez hit the winner with four minutes of the match remaining to give Chile a 3-2 win in their first match of the Pan Am Games, defeating Mexico 3-2. Mexico were the first team to make a dent on the scoreboard, with Alexis Campillo registering after just two minutes of play before goals either side of half time from Chile’s Sven Richter and Vincente Martin turned the match on its head. Mexico thought that they had claimed a point from the content when Guillermo Pedraza found the target five minutes from time before Rodriguez’s winning goal settled the contest.

Canada 9-1 Brazil
2011 Pan Am Games Silver medallists Canada were in fine form in their opening match, overpowering Brazil to move to the top of Pool B on goal difference. The Canadians - who claimed a 4th place finish at the recent Hockey World League Semi-Final in Buenos Aires to leave themselves within touching distance of a place at the 2016 Olympic Games - were in imperious form, suggesting that they are more than capable of claiming the Gold medal and the guaranteed ticket to Rio up for grabs at the event in Toronto. The two sides exchanged goals in the first period, with Canada’s Brenden Bissett registering before Matheus Borges pulled Brazil level a minute later. Vastly experienced Canadian duo Scott Tupper (C) and Mark Pearson both hit the target in the second period ahead of a rampant five goal blast in the third quarter with Gabriel Ho Garcia, Adam Froese, a second for Pearson and a double for Matt Guest taking the score to 8-1. Paul Wharton completed the match scoring ten minutes from time.