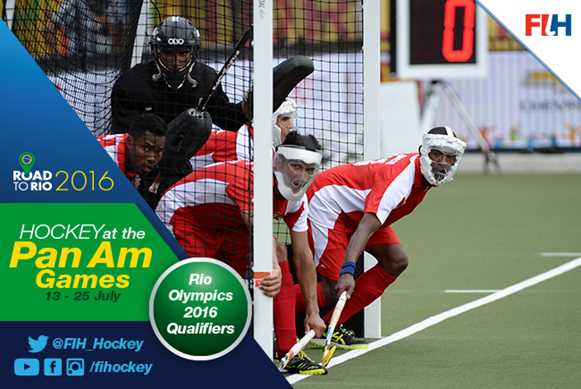 Teams on the hunt for a ticket to Rio at Pan American Games in Toronto, Canada

Men’s Day 3 at the Pan American Games Hockey competition in Toronto saw Pool A winners Argentina involved in a remarkably close contest with Cuba, while USA took second place in the pool with a narrow victory over Trinidad & Tobago. Canada continued their winning ways by topping Pool B with a convincing win over Mexico thanks largely to four goals from Gabriel Ho-Garcia, while Chile overcame Brazil to finish second in the pool standings.

The coveted Pan American Games Gold medal comes with a direct qualification ticket to Rio 2016, ensuring that there is a huge amount at stake in this illustrious competition. More details on the matches can be found below.

Pool A
Argentina 5-4 Cuba
In their final Pool A match, 2014 Rabobank Hockey World Cup Bronze medallists Argentina were given a stern test by Cuba, a team that sits 42 placed below them in the FIH World Rankings before making it three wins from three at the 2015 Pan American Games. An open play strike from Lucas Vila gave 6th ranked Argentina a 1-0 lead in the second quarter, before the 48th ranked Cubans levelled the scores against their illustrious opponents thanks to a penalty corner from Yoandy Blanco, a player who has really made a name for himself in Toronto. Two goals in two minutes at the end of the quarter from Gonzalo Peillat and Joaquin Menini gave Los Leones a 3-1 lead at the break before Peillat added another seven minutes after the break. At 4-1, Cuba could have been forgiven for throwing in the towel, but showed a stunning desire to take the game to their higher ranked opponents to fight back to 4-3 with fourth quarter goals from Yoel Veitia and Roger Aguilera. Peillat completed his hat-trick five minutes before the end of the match to take the score to 5-3, but Cuba continued to fight and came within a goal of Argentina when Veitia grabbed his second of the game before time eventually ran out for a Cuban team that is making big waves at this event.

Trinidad & Tobago 1-2 USA
USA claimed a crucial victory against Trinidad & Tobago to seal a second place finish in Pool A and set up a cross-over quarter-final meeting with the team that finishes third in Pool B. Defeat for T&T confirmed a fourth place finish in the pool, meaning that they now face the unenviable task of playing the team that wins Pool B in the quarter-final phase. All of the goals came in the first period of the match, with Will Holt firing the USA ahead with an 6th minute field goal before Alex Grassi doubled the advantage in the 13th minute, also from open play. Ishmael Campbell reduced the deficit ahead of the quarter-time break, but 26th ranked USA defended well to deny their 29th ranked opponents any further goals.

Pool B
Brazil 1-3 Chile
Chile emerged victorious against South American rivals Brazil to seal a second place finish in Pool B, setting up a quarter-final meeting with Cuba, who finished third in Pool A. Brazil finished third in Pool B and will take on Pool A’s second place finishers USA in the next phase. Brazil found themselves two goals down in the opening period thanks to strikes from Nicholas Renz and Sven Richter, with Martin Rodriguez adding a third ten minutes after half time to effectively kill the game. Brazil pulled a goal back through Matheus Borges, but it was not enough to spark a comeback for the Brazilians.

Canada 8-1 Mexico
Canada continued their imperious form at the Pan American Games by claiming another big win on home soil in Toronto, seeing off Mexico to top Pool A with three wins from three matches. The result means that Canada will face Trinidad & Tobago - who finished bottom of Pool A - in the quarter-finals, with pool B’s bottom placed team Mexico now facing the unenviable task of taking on reigning Pan American champions Argentina in the next phase. Gabriel Ho-Garcia was the star of the show, scoring two goals in both the first and the fourth quarters to bag four in the match, with Matthew Sarmento (2), Matt Guest and Paul Wharton also on target. Mexico’s solitary goal came from Alexis Campillo six minutes after half time.