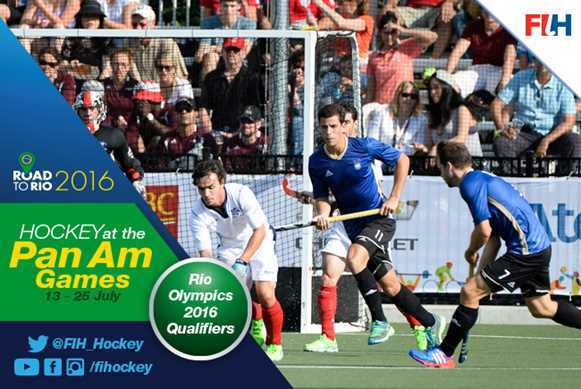 PAG2015 (M): Canada and Argentina to meet in the gold medal match on Saturday

Mexico and USA have emerged victorious in the men’s 5-8 play-off matches at the Pan American Games in Toronto, overcoming the respective challenges of Cuba and Trinidad & Tobago to seal their places in the 5-6 classification game.

Alexis Campillo, Guillermo Pedraza and Ricardo Garcia were all on target as Mexico battled to a 3-1 win over Cuba, with Tyler Sundeen scoring the crucial goal as USA defeated Trinidad & Tobago 2-1. Cuba and Trinidad & Tobago will meet in the 7-8 classification match, which takes place alongside the Gold medal, Bronze medal and 5-6 play-off games on Saturday (25 July).

These were followed by the men’s semi-finals with Argentina defeating Chile to go head to head with Canada in the gold medal match on Saturday.  Canada joined Argentina in the final after a dramatic shootout with Brazil.  Canada's win also saw them qualify for Rio 2016 Olympic Games.

More details on the matches played so far can be found below.

Mexico 3-1 Cuba
Goals from Alexis Campillo, Guillermo Pedraza and Ricardo Garcia earned Mexico a place in the 5-6 classification game with a 3-1 win over 10-man Cuba. The Cubans produced a remarkable defensive display, but ultimately ended on the losing side and will compete in the 7-8 classification match. Mexico scored from their first penalty corner of the match, with Campillo finding the target three minutes before half time. Pedraza doubled the Mexican advantage shortly after half time before Cuba rallied and pulled a goal back at the end of the third quarter through Yasmany Gutierrez. However, the result was put beyond all doubt when Ricardo Garcia fired home ten minutes from time to seal Mexico’s place in the 5-6 classification match.

USA 2-1 Trinidad & Tobago
USA set up a meeting with Mexico in the 5-6 classification game thanks to a narrow 2-1 win over Trinidad & Tobago. A penalty corner from Will Holt gave USA the lead in the 27th minute, although T&T pulled themselves level six minutes after half time when Mickell Pierre supplied Tariq Marcano who finished in style. However, USA scored what proved to be the winning goal just two minutes after T&Ts equaliser, with Tyler Sundeen netting his second goal of the competition with an open play effort. T&T threw caution to the wind in the dying stages, removing goalkeeper Andrey Rocke and sending another outfielder player into the action in an attempt to get the goal that would have forced a shoot-out. However, it was not meant to be, with USA putting on a strong defensive display to deny their opponents any further shots on goal and taking the victory.

Argentina 6-0 Chile
Argentina produced another brilliant performance to secure a place in the men’s Gold medal match at the Pan American Games, defeating Chile in front of a packed stadium in Toronto. 22-year-old penalty corner ace Gonzalo Peillat netted a hat-trick to continue his remarkable run of scoring at least two goals in every match played so far in the competition, taking his tournament tally to 14 goals in just five matches. Peillat leads the scoring charts by six clear goals, with Leones team-mate Lucas Vila being his closest rival on eight. Talismanic attacker Vila opened the scoring in the sixth minute, with Peillat getting his first on stroke of half time with a trademark penalty corner drag-flick to give Argentina breathing space at the end of a closely contested opening two periods. Los Leones found top gear in the third period, scoring three times in just three minutes with Peillat completing his hat-trick and team captain Matias Paredes also on target to take the score to 5-0. Manuel Brunet completed the scoring in the final minute of the match, leaving Head Coach Carlos Retegui just one victory away from winning a Pan American Games Gold medal as both a player (1991, 1995 and 2003) and a coach.

Brazil 0-0 Canada (3-5 SO)
13th ranked Canada were given a scare by 37th ranked Brazil in the men’s semi-finals of the Pan American Games in Toronto, with the host nation needing a shoot-out to overcome the challenge of their South American opponents to reach the Gold medal match and qualify for the Rio 2016 Olympic Games. The result, combined with Argentina’s semi-final victory over Chile earlier in the day, means the Canadians are now guaranteed a ticket to Rio in 2016 regardless of what happens in the final. This is thanks largely to their stunning performance at the Hockey World League Semi-Final in Argentina, where a fourth place finish put them within touching distance of Olympic qualification ahead of the Continental Championships. “The Olympics has been a goal for our team from (the end) of Guadalajara four years ago”, said Adam Froese, who scored the winning goal in the shoot-out. “We've been working really hard as a group. The guys here, the guys who aren't on the team today, we've all worked really hard. This is just a moment for all of us to enjoy those hard hours that we put in." Despite the difference in world rankings, with match itself was incredibly close with both sides showing brilliance in defence to keep the score locked at 0-0. Canada scored all of their efforts in the shoot-out, with Luis Reus being the only Brazilian to miss before Canada’s Froese put the result out of reach.  Remarkably, Argentina and Canada have featured in every Pan American Games final since 1975, with reigning champions Argentina having claimed eight titles to Canada’s four. Brazil - who sealed their place at the Rio 2016 Olympics earlier this week - will face Chile in the battle for the Bronze medal.