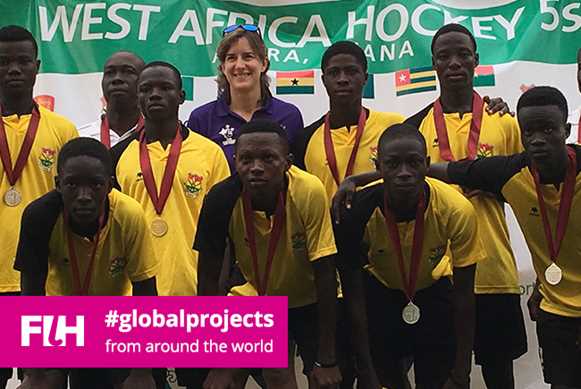 With its national women’s team having just finished competing in their first major international competition and a national hockey event taking place in its capital city, Ghana’s hockey development is progressing apace at both ends of the development spectrum.

Ghana women have just concluded their first foray into the Commonwealth Games, while Accra is preparing to host the West Africa Hockey5s tournament.

The TAP West Africa project began in 2014 as part of England Hockey’s bid to host the 2018 World Cup.

It is run in conjunction with the African Hockey Federation, the Ghana Hockey Association and is supported by FIH.

UK Sport has also been a key funding partner in the project. Four years on and England are just a few months away from hosting the Vitality Hockey Women's World Cup London 2018 and Ghana is celebrating reaching a number of landmark points in its own hockey development.

"People who have worked on the project have left with their own incredible life experiences and memories and there is a distinct sense that it had changed everyone’s lives for the better.”
Dame Katherine Grainger, Chair of UK Sport

FIH Hockey Academy and Education Manager Andre Oliveira says there are three areas in which the Targeted Assistance Programme has delivered outstanding results. The first of these is the development of a workforce which can deliver hockey events, namely, coaches, umpires, umpire managers and educators.

Then there is the development of the national team, which has been so emphatically demonstrated by the success of Ghana women in qualifying for the Commonwealth Games.

Ghana are now ranked 30th in the world and will be the lowest ranked team at the tournament, but their inclusion and their rise up the rankings signals a spreading of hockey across Africa.

The third area of improvement is the hockey development and growth in the countries that surround Ghana. In Togo, the number of registered players has reached 700 (from 200) and Burkina Faso is about to enter its first international competition – the West Africa Hockey5s tournament in Ghana’s capital city Accra.

Also at the inaugural Hockey5s tournament were Nigeria, Ivory Coast and Burkina Faso. Dame Katherine Grainger is Great Britain's most decorated female Olympian, with five Olympic medals in addition to six world championship titles. She is now Chair of UK Sport and was on hand to watch the hockey action at the West Africa Hockey5s.

Speaking about this Programme and the event, she said: “I had heard great things about the TAP project but it wasn’t until being privileged enough to have a visit to Ghana myself that I realised its enormous positive impact. We often talk about how sport can transform lives and in Ghana I saw a wonderful tangible example of that. Once again great partnerships in sport created something special and ground-breaking.

“Between UK Sport, England Hockey, the FIH, the African Hockey Federation, and the Ghana Hockey Association, five different African Nations were able to come together for the first time and compete in a hockey tournament. For two of those nations the athletes had never had the opportunity to compete internationally before."

She continued: "The hockey was played with a ferocious level of passion and enthusiasm and the singing and dancing displayed by the teams at the end of the tournament showed how much players, officials and spectators were celebrating the experience.”

Grainger pointed out that Ghana’s aim at the start of the project was to qualify for a world level tournament by 2022. In fact, in qualifying for the Commonwealth Games, this target was met four years early.

“In addition to the tournament itself, throughout the four year project further participation and performance projects had been put in place for coaches, players and umpires with a plan that hockey can continue to grow and develop in Ghana and across West Africa. “ added Grainger, "People who have worked on the project have left with their own incredible life experiences and memories and there is a distinct sense that it had changed everyone’s lives for the better.”

FIH's Targeted Assistance Programme is a key component of the 10-year Hockey Revolution strategy. By increasing the degree of professionalism amongst the organisations in West Africa it is hoped that this Programme will contribute to the strategy's overall aim of making hockey a global game that inspires the next generation.

For more information about hockey in Ghana, click here.

For more information about hockey in Africa, visit the African Hockey Federation's website.