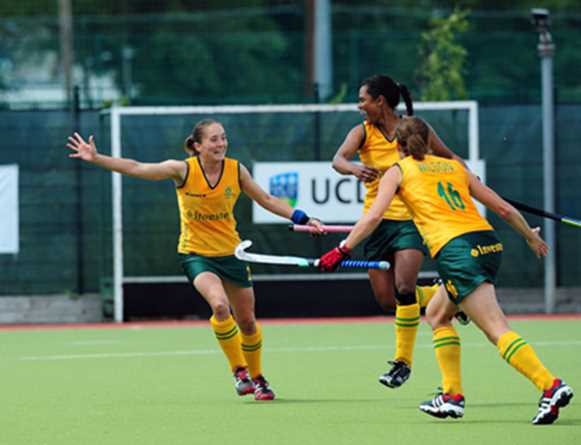 South Africa bounced back from a 2-0 deficit to secure a 2-2 draw in their opening match of the ESB Electric Ireland FIH Champions Challenge. Pietee Coetzee rescued her team with her 217th international goal in 222 matches before setting up the equalizer for Illse Davids with just over ten minutes remaining. The fightback followed first goals from Scotland's Louise Baxter and Nikki Kidd.

It was a game containing two very contrasting halves of hockey, with Scotland clearly the better side in the first period while South Africa dominated the second.

Scotland won their first penalty corner in only the seventh minute of the match, with Emily Maguire going close to opening the scoring. The game’s opening goal arrived in the 29th minute when Louise Baxter drilled home a loose ball from the top of the circle which gave South Africa keeper Vuyisanani Mangisa absolutely no chance of saving.

Scotland doubled their advantage on the stroke of half time thanks to Nikki Kidd, who sent a powerful penalty corner flick into the bottom right corner of the South African goal to make the score 2-0. It was no more than Scotland deserved, having outplayed South Africa for much of the period.

South Africa came out in the second half looking like a different team, pressing their opponents deep thanks to some impressive containing play. Pietee Coetzee went very close on two occasions before eventually finding the net with a penalty corner that deceived Scotland keeper Abi Walker.

Having got their lifeline, South Africa put even more pressure on the Scotland circle and went close to scoring the elusive equalizer. Eventually, the goal came when Coetzee sent a low penalty corner flick onto the stick of the diving Illse Davids, who brilliantly deflected the ball into the Scotland net with 11 minutes of the match remaining.

Both sides went close to scoring a winner in the final stages of the match, with Coetzee seeing a late penalty corner flick well saved by Abi Walker in the last minute. However, in truth a draw was a probably a fair reflection of a game that had witnessed periods of domination by both teams.

For Coetzee, her strike leaves her just three goals short of the world record mark of 220, and few would bet against her reaching that target during this week’s tournament.