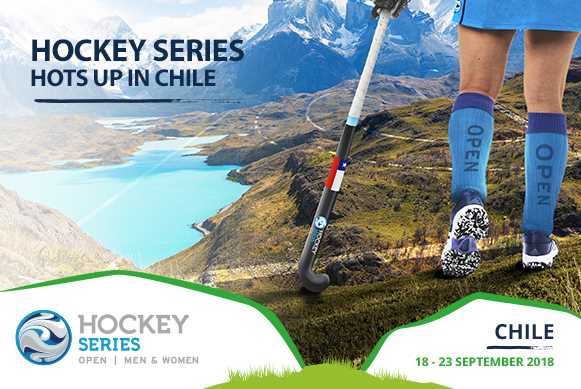 Hockey Series hots up in Chile

South America's first Hockey Series Open competition is all set to get underway in Chile, in the hockey-loving city of Santiago.

The exciting event will see six men’s teams and six women’s teams from across the Pan American Hockey Federation (PAHF) playing a round-robin contest to see who will qualify for the Hockey Series Finals and the opportunity to reach the Olympic Qualification Events – all taking place in 2019.

There will be fiercely contested matches in the men’s competition as some of the most promising squads at the lower end of the FIH Hero World Rankings will come together for a chance not just to embark on an Olympic odyssey but also the opportunity to gain valuable ranking points.

Brazil are the highest ranked participants, sitting at 26 in the FIH Hero World Rankings (WR), but behind them are an ambitious trio of teams in the shape of host nation Chile (WR:34), Venezuela (WR:43) and Uruguay (WR:46). All of these teams are more than capable of winning matches and taking one of the two top places that secures qualification to the next stage of the Hockey Series.

Peru at 58th in the world and the unranked Bolivia, will also be relishing the chance to get international experience against higher ranked rival nations and, as these events have shown, sometimes the lower ranked teams have been producing some real upsets and drama.

All six teams recently competed in the South American Games and, if that event was a clue to form, then Chile will be confident coming into this event. They beat all their rivals handsomely, losing in the final to Argentina by a solitary goal.

In the women’s event, as with the men’s event, the top two placed nations will progress to the next round.

Chile and Uruguay are the highest ranked teams and both have had recent experience of high level international competition. Uruguay qualified for the 2015 Hockey World League Semi-Finals and Chile repeated that feat in 2017.

Sitting at 16th in the world, Chile is a nation that has really embraced hockey development at all levels and that is showing in the performance of the national team. However, Uruguay (WR:24) has the most recent bragging rights as they finished ahead of Chile at the South American Games held in Bolivia, taking the silver medals behind Argentina. In the pool match stage of that competition, the two teams drew and the close rivalry that the two teams share is likely to continue to fascinate fans in Santiago too.

Brazil (WR:37) and Peru (WR:39) are two more closely matched sides. Brazil beat Peru at the South American Games by a 1-0 scoreline and Peru finished seventh in the event, which will have been a disappointment. Expect Patricio Martinez to have marshalled his squad to produce a better performance this time around.

The final two competing nations are Paraguay (WR:58) and Bolivia, who have yet to achieve a world ranking. The more experienced Paraguay side will be looking to overturn the rankings and build on some recent successes, including a win over Peru at the South American Games. Bolivia has a very inexperienced squad in terms of the number of international caps, but the players are experienced and will be determined to make their mark on this event.

The Hockey Series Open in Santiago starts on 18 September. All the matches will be streamed on the FIH YouTube channel.

Two men's teams and two women's teams will each qualify for one of three FIH Series Finals which will be played in 2019, offering berths into the Olympic Qualification Events.

Each of these FIH Series Finals will consist of eight teams and will take place throughout the world.

For detailed information about the FIH Series Finals and Olympic Qualification, visit the Q&A page on the FIH website here.