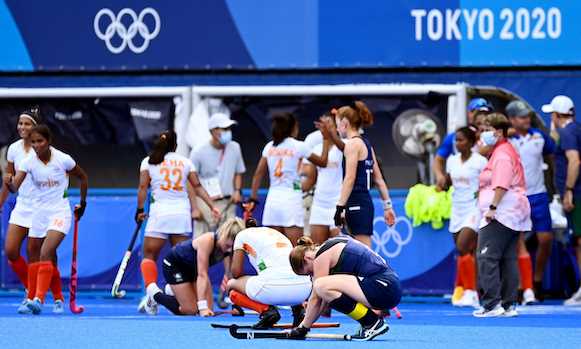 Day 7 (Morning): A torrential downpour may have been enough to delay the start of the day’s play, but it certainly could not stop the drama as Spain’s men and India’s women kept their Olympic dreams alive at the Oi Hockey Stadium. A late Pau Quemada strike earned Spain a shock 1-1 draw against Pool A winners Australia to seal their place in the competition quarter-finals, while India’s women also left it late, with Navneet Kaur’s winner against Ireland keeping her side in the competition just when elimination seemed certain.

South Africa’s men and women were also in action, but could not find the results they needed to reach the knock-out stages.

South Africa 1-4 Germany
Germany proved too strong for Pool A rivals South Africa, cruising to a 4-1 victory over their opponents in a match that was delayed by over an hour due to a torrential downpour here in Tokyo.

The result moves Die Danas level on points with the Netherlands, who they face tomorrow to determine the winner of Pool B. Defeat for South Africa means they can no longer qualify for the quarter-finals.

The delayed start did not stop Germany from exploding out of the blocks once the match finally started, with Lisa Altenburg’s flicked effort putting Die Danas into the lead with just 75 seconds played. A penalty corner from Sonja Zimmerman and a second for Altenburg gave Germany a richly deserved 3-0 advantage at half time. Anne Schroder made it 4-0 with a superb reverse deflection that beat unsighted South Africa goalkeeper Phumelela Mbande at her near post before Toni Marks netted a well-worked team goal to give South Africa a consolation goal.

Commenting on singing the national anthem in the middle of a torrential downpour, South Africa’s Marizen Marais said: “We all had a little bit of a laugh because we could not sing it was raining so hard”, with Germany’s Viktoria Huse describing the weather conditions as “so crazy”.

Ireland 0-1 India
India claimed a dramatic victory over Ireland to keep their quarter-final qualification hopes alive, with Navneet Kaur netting three minutes from time to earn the Asians their first points of the competition. A draw or defeat would have resulted in India’s elimination, but Kaur’s fine close-range deflection proved to be enough for a crucial three points against a team who now sit above them only on goal difference.

Ireland – who needed a point to secure their progress into the knock-out stage – produced a magnificent defensive display throughout the match, with goalkeeper Ayeisha McFerran the star of the show as her team kept out a staggering 14 penalty corner opportunities. It seemed that their wastefulness was going to cost them dearly, but Navneet Kaur’s clever touch on team captain Rani’s dangerous cross-shot was enough to maintain India’s dreams of reaching the competition quarter finals with one round of matches left to play. India take on the already eliminated South Africa in their final pool match, with Ireland facing a tough encounter against Great Britain.

Ireland’s Deirdrie Duke said: “That was a game that we needed to win and we didn’t so that’s my overwhelming feeling. Quick turnaround tomorrow. Depending on other results now, that quarter final spot is still up for grabs, so we’re going to have to park this pretty quick and get ourselves up for a big one tomorrow.”

Australia 1-1 Spain
A last gasp equaliser from Pau Quemada booked Spain’s place in the quarter finals, earning his team a dramatic 1-1 draw against Pool A winners Australia, who dropped their first points of the competition.

It was a sensational result for the Red Sticks, claiming the vital point that the needed to seal a berth in the knock-out phase, with Argentina and New Zealand – the only teams mathematically capable of catching them – playing each other this evening.

Australia’s first place finish in Pool A means they will face a cross-over quarter-final match against the team that finishes fourth in Pool B, which will be concluded this evening.

Australia took the lead the lead three minutes into the second quarter when Tom Wickham pounced from close range after Spain shot-stopper Quico Cortes saved a penalty corner effort. However, the Red Sticks produced their best performance of the competition to stay within touching distance of the mighty Kookaburras, who dominated possession but could not kill the game off before Quemada’s dramatic late intervention, with the 36-year-old somehow finding a route to goal with a deflected penalty corner effort.

“It was important because it gave us one point and we really need that point”, said Spain hero Pau Quemada. “It wasn’t a pretty goal, but a goal is a goal. It is what we needed to qualify for the quarter-finals.”

Reflecting on the result, Australia’s Aran Zelewski said: “We wanted to make the quarterfinal and finish on top of our ladder. It puts us in the best position for the quarter-final on Sunday. We will go back in and learn from what happened at the end. The main thing is we finished on top."

Canada 4-4 South Africa
South Africa’s slim hopes of reaching the competition quarter finals were ended when they could only claim one point against Canada, who earned their first point of the tournament in a thrilling 4-4 draw. The African continental champions needed a big victory to put pressure on a Germany side sitting three points above them, with the defeat meaning that Germany are now certain of a place in the knock-out stages.

South Africa – who earned a stunning win over Germany on Thursday (29 July), helping them climb up to tenth place in the FIH World Rankings - raced into a 2-0 lead thanks to goals in the 2nd and 9th minutes form Nqobile Ntuli and Nic Spooner, only for Mark Pearson and Keegan Pereira to restore parity with goals either side of the quarter-time break. The teams traded blows in the third quarter as South Africa’s Matt Guise-Brown and John Boothroyd of Canada took the score to 3-3 before Samkelo Mvimbi netted what looked to be a winning goal for South Africa with just two minutes of the match remaining. However, Canada had the final say in the contest, with Gabriel Ho-Garcia’s open play strike completing the match scoring.

The action continues later today with the final matches of the men’s pool phase. In Men’s Pool A, India take on Japan in a match where the result cannot change the fate of either side, with India having already secured second place and Japan unable to progress. This is because the two teams that sit three points above them, New Zealand and Argentina, face each other, ensuring that at least one of those sides will claim enough points to move out of the host nation’s reach. In Men’s Pool B, the outcomes of the Germany vs Netherlands and Belgium vs Great Britain matches will determine the quarter-final line-ups.