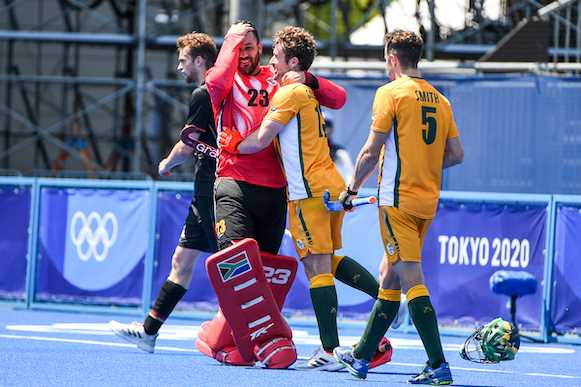 Day 6 (Morning): The Netherlands and Great Britain have both joined Men’s Pool B leaders Belgium in the quarter-finals of the hockey competition of the Olympic Games Tokyo 2020. A fourth successive win for Belgium sees them remain clear at the top of Pool B, with a thrilling draw between the Dutch and GB earning them a point apiece to confirm their respective berths in the knock-out stages. However, a shock defeat for Germany at the hands of South Africa means that their place in the last eight is not yet sealed, with the excellent South Africans still having a slim chance of progressing.

In Men’s Pool A, India defeated reigning Olympic champions Argentina to book a ticket to the knock-out phases, with Los Leones currently outside of those all-important top four positions with one round of matches remaining.

India 3-1 Argentina
A tense encounter between India and Argentina was eventually won by the eight times Olympic gold medallists, who came away with a 3-1 victory against the reigning Olympic champions. India are now certain of a top two finish in Pool A, although Australia’s three point lead – and a vastly superior goal-difference – would make a first place finish unlikely going into the final round of matches.

India did most of the attacking in the first two periods, but Argentina produced an excellent defensive performance to keep the Asian giants off the scoreboard. The pressure eventually told when Varun Kumar’s deflected penalty corner drag-flick deceived Argentina goalkeeper Juan Vivaldi and flew into the net. Argentina hit back thanks to Maico Casella, who ripped a high and powerful penalty corner drag-flick into the goal to restore parity with 12 minutes of the match remaining. However, late goals from Vivek Prasad and Harmanpreet Singh wrapped up the points for India and inflicted another blow to Argentina’s hopes of defending their Olympic title.

Reflecting on the victory, India’s Rupinder Pal Singh said: "Feeling great after the win but there's a lot of things to improve yet because the important games are coming in a few days."

Argentina’s Maico Casella said: "It was a tough game. We defended a lot. We knew that the game was going to be like this. We played the game we had to play but they did well also. We have to play against New Zealand and we have to win. Our mind now is there."

Belgium 9-1 Canada
Reigning World champions Belgium thrashed Canada to earn a fourth win on the bounce, maintaining their three-point lead at the top of the Pool B standings while eliminating the Canadians from the competition in the process. Canada are now unable to qualify for the quarter-finals, being six points away from the qualification positions with just one match, against fifth-placed South Africa, remaining.

Canada kept the brilliant Belgians under control for large periods of the opening two quarters, with Alexander Hendrickx’s 12th minute opener being cancelled out by a superb run and backhand strike from Mark Pearson. The Red Lions had to wait until the 29th minute before taking the lead, with Sebastian Dockier on target ahead of a rampant display after half time. Dockier and Hendrickx both claimed second goals either side of an effort from Felix Denayer, with Simon Gougnard and Cedric Charlier pushing the score to 7-1 at the end of the third quarter. Tom Boon and a stunning deflection from Florent Van Aubel – playing his 250th match for Belgium – completed the scoring, as Belgium hit nine goals for the second successive match; an ominous sign for their gold medal rivals here in Tokyo.

"We've got it all in our hands and that was the number one priority, and now we know how this kind of tournament works”, said Belgium’s Florent Van Aubel. “We're qualified for the quarter-finals and it's now that we have to do it. So we have one game against GB (Great Britain), an important game, and then it's do or die, three games in a row. That's what we play for."

Canada goalkeeper Antoni Kindler said: "Obviously disappointed. We're playing the world champions so to be competitive with those guys you have to play your best hockey for 60 minutes. Unfortunately we let it slip there in the third quarter. With a team of their quality, every opportunity they have they capitalise.”

South Africa 4-3 Germany
South Africa produced unquestionably the biggest shock of the tournament so far with a stunning 4-3 victory over the much-fancied Germany. While the result keeps South Africa’s chances of qualifying for the competition quarter-finals technically alive, they would need not only for results to go in their favour but also for a dramatic change in goal-difference if they are to catch the Germans, who ended the day fourth in the Pool B standings.

Germany justified their status as pre-match favourites when Timm Herzbruch fired home a messy penalty corner, but South Africa were level just a minute later thanks to a penalty corner of their own, with Matt Guise-Brown slamming a rocket against the backboard. Keenan Horne put South Africa ahead on the stroke of quarter time, but goals from Lukas Windfeder and Constantin Staib swung the match back in Germany’s favour, earning them a 3-2 half-time lead. Germany battered South Africa throughout the third period, but a superb counter-attack goal inspired by the exceptional Dayaan Cassiem resulted in Nicolas Spooner levelling the scores at 3-3. The winner came from the stick of Dayaan’s younger brother Mustaphaa Cassiem, with the 19-year-old – who was crying tears of joy at the end – seeing his speculative cross end up in the goal via a Germany stick, giving South Africa a famous victory over the European giants.

"It's awesome”, said South Africa captain Tim Drummond. “It's something we've trained really hard for and moments like this and results. We knew we had it in us and it's just great for the guys to get this feeling now and hopefully we can remember this feeling.”

Germany’s Lukas Windfeder said: “Our aim was to win here. Then we get 3-2 after a difficult start, we have everything in our own hands, but let us counter stupidly twice. Of course, there should have been more goals today through chances and corners, but it can't be that we have to score five or six goals per game to win. We want to decide the matches for us on the good defensive. And that doesn't work that way. "

Netherlands 2-2 Great Britain
Great Britain produced an incredible late fightback to steal a 2-2 draw against the Netherlands, a result which put both teams through to the knock-out stages. Both teams have seven points, with Netherlands currently sitting second in the standings above third placed GB due to a superior goal difference.

Thierry Brinkman put the Netherlands ahead in the 22nd minute before a penalty corner from Jip Janssen doubled the Dutch advantage five just a minute after half-time. Great Britain battled hard to get back into the contest and got the reward that their perseverance deserved thanks to a late double from striker Sam Ward, who guided home an open play deflection before bagging a penalty corner with three minutes left to play. The Dutch had a succession of penalty corners in the final minute, but could not find a way past inspired goalkeeper Oliver Payne, who was outstanding throughout.

Great Britain striker Sam Ward said: "Coming back from the loss we had the other night - it was pretty tough to lose 5-1 to the Germans - we managed to put a performance in and do ourselves proud."

Netherlands captain Billy Bakker said: "For the first three quarters we were good, but it's difficult to keep up that level for four quarters. In the fourth quarter GB (Great Britain) also played very well - they also have quality - and we weren't focused enough on our defensive positions. We lost the ball a lot and they benefited from that - we needed to keep the ball better. But we're satisfied.”

The action continues later today with four matches in the women’s competition, three in Pool B and one in Pool A. In Pool B Spain face China before Japan and Argentina take to the field, with the Oceania derby match between Australia and New Zealand also scheduled. The Pool A match is a mouth-watering clash between reigning Olympic champions Great Britain and the Netherlands, the current World, European and FIH Hockey Pro League champions in a re-match of the Rio 2016 gold medal game.