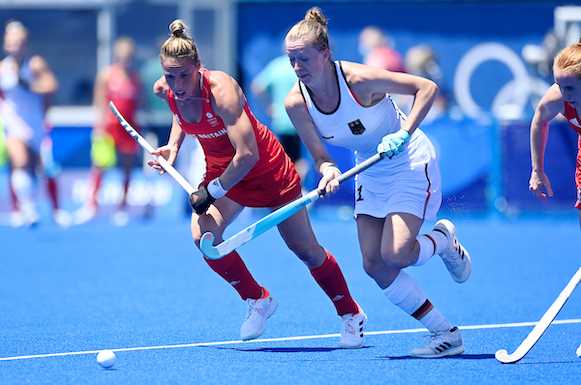 Day 2 (Morning): The women of Germany, New Zealand, Australia and China all claimed significant victories in the morning session of Day 2 at the Olympic Games Tokyo 2020.  More information can be found below.

Great Britain 1-2 Germany
Great Britain’s women started their Olympic title defence with a loss as Germany came away with a 2-1 win and all three points in their Pool A clash. Die Danas fell behind when Sarah Jones netted a close-range penalty corner in an opening quarter dominated by the Rio 2016 gold medallists. However, Germany restored parity in the second period thanks to Viktoria Huse’s penalty stroke. Charlotte Stapenhorst scored what proved to be the winning goal early in the third period, firing home from five metres out after being perfectly supplied by Pia Maertins. With just one goal from 11 penalty corner chances, GB will reflect on missed scoring opportunities ahead of their meeting with South Africa on Monday, with Germany taking on India later that day.

Commenting on winning their opening game, Germany’s Stapenhorst said: "It's awesome. I love it. I love the feeling. It was a tough first 15 minutes. Everyone was a little nervous and you've seen some girls obviously playing in their first Olympics. There was a really, really intense feeling on the pitch, but then we started playing hockey and we started connecting."

Australia 3-1 Spain
Triple Olympic gold medallists Australia overcame a stern challenge from Spain to take all three points, beating the Red Sticks 3-1. An evenly contested match burst into life in the third quarter, with the Hockeyroos scoring quickfire open play goals from Rosie Malone and Emily Chalker. Spain hit back almost immediately when Beatriz Perez netted, but the Australians re-established their two goal cushion thanks to Grace Stewart’s penalty corner conversion. It was a very solid start for Australia, who are looking for their first Olympic podium finish since winning gold at Sydney 2000.

Speaking after the match, Australia’s Chalker said: “[It was] a bit of a nervous start but to be able to put three goals in your first Olympic game we’ve been training so hard for, is going to give everyone a bit of confidence, settle the nerves and then we’ll go full steam ahead from here."

Japan 3-4 China
Beijing 2008 Olympic silver medallists China claimed a superb victory over hosts and Asian continental champions Japan, triumphing 4-3 in their Pool B encounter. China were rampant in the early stages and opened up a deserved 2-0 advantage thanks to goals from Gu Bingfeng and Zhang Ying. The Cherry Blossoms stepped their game up considerably after conceding, with strikes from Kana Nomura and Yuri Nagai levelling the scores. A second goal for China’s Gu and Hazuki Nagai took the score to 3-3 before Liang Meiyu scored a brilliant winner, evading three tackles before producing a diving backhand finish to seal all three points for China.

New Zealand 3-0 Argentina
New Zealand stormed to a 3-0 victory over higher-ranked Argentina in their opening match of Tokyo 2020. The Black Sticks were clinical against Las Leonas, deservedly earning all three points in this Pool B encounter by scoring three times from five attempts on target. Kelsey Smith put New Zealand ahead in the 35th minute before Hope Ralph’s penalty corner deflection doubled the advantage five minutes later. The result was put beyond all doubt when Holly Pearson’s squeeze-shot on the turn flew past diving Argentina goalkeeper Belen Succi with seven minutes remaining, earning the Black Sticks a significant win in these very early stages of the competition.

A further four matches in the Men’s competition will take place on Sunday evening. In Pool A, India and Australia - both winners on Saturday – will go head-to-head, with Spain facing New Zealand and hosts Japan taking on reigning Olympic champions Argentina. The day’s play will be concluded by the Pool B meeting between the respective continental champions of Africa and Europe, with South Africa taking on the Netherlands.

Official Communication
Argentina player Lucas Rossi was given a one match suspension by the International Hockey Federation (FIH) for a breach of the FIH Code of Conduct that occurred immediately after the final hooter of the match Argentina v. Spain, played on 24 July 2021. Consequently, in accordance with the FIH Competition Regulations for the Tokyo 2020 hockey events, Argentina’s squad will be reduced by one player – and therefore consists of only 15 players - for Argentina’s next match v. Japan scheduled on 25 July.