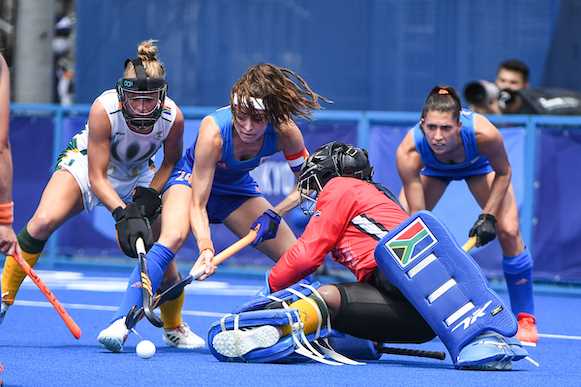 Day 5 (Morning): The Netherlands and Germany continued their excellent form in the women’s Pool A, with both claiming important victories to maintain their 100% winning runs. Defending champions Great Britain were also victorious, while Spain’s women got their Pool B campaign off the ground with their first three points, defeating the previously unbeaten New Zealand.

Netherlands 5-0 South Africa
Reigning World, European and FIH Hockey Pro League champions the Netherlands continued their impressive start to the Olympic Games Tokyo 2020 as a third successive win, this time against South Africa, kept them in the Pool A driving seat.

The Oranje were in control throughout the contest, eventually breaking through the South African resistance 16 seconds into the second quarter when Frederique Matla fired home. Matla scored a second five minutes into the third quarter with a low penalty corner effort before Marloes Keetels made it 3-0 with a tap-in. The final two Dutch goals arrived in the 52nd and 55th minutes, with Felice Albers and Maria Verschoor completing a comfortable victory for the world number one ranked team on the occasion of Lauren Stam’s 100th international match.

"We're doing what we have to do”, said Netherlands head coach Alyson Annan. “We're playing well and building our game up as we would like. We are making sometimes too many mistakes but I think we are doing well so far.”

Commenting on the fine goalkeeping performance of Phumelela Mbande, who made 18 saves on her 50th appearance, South Africa’s Edith Molikoe said: "Very proud of our goalkeeper. Obviously it's her 50th so not surprised she performed like that. She also showed us why she earned those 50 caps today. I'm really, really proud of her and the girls with the way they defended. Never easy defending the world's greatest, but we defended and did our job."

Great Britain 4-1 India
Reigning Olympic champions Great Britain made it six points from a possible nine thanks to a second successive win, seeing off India. The result all but guaranteed GB’s progression to the quarter-finals, being six points clear of both India and South Africa with a vastly superior goal-difference.

Two open play strikes from Hannah Martin set the Rio 2016 Olympic gold medallists on their way to victory, although Sharmila Devi’s penalty corner tip-in reduced the deficit mid-way through the second quarter. However, goals in the third and fourth quarters ensured that all three points went the way of GB, with Lili Owsley netting from close range before Grace Balsdon’s penalty stroke wrapped things up three minutes from full time.

"We put in a team performance we wanted”, said GB’s Martin. “We stuck to the game plan and managed to grind out the three points. Momentum's key. This back-to-back win (after defeating South Africa on Monday) is brilliant for us. As a squad, we are hoping to take this momentum forward into the Dutch (Netherlands) game tomorrow."

Discussing his team’s hopes of reaching the quarter-finals, India head coach Sjoerd Marijne said: "We still have chances. There are still six points to get and that can be enough for the quarters. That's what we're all about, that's our goal and that's what I said to the girls."

Germany 4-2 Ireland
Lisa Altenburg scored twice to help Germany’s women move level on points with the Netherlands at the top of Pool A thanks to a third successive victory, getting the better of Ireland, who currently sit fourth in the pool standings.

Altenburg put Die Danas ahead ten minutes into the contest from open play, with Cecile Pieper doubling the lead in the 20th minute. Altenburg scored her second and Germany’s third five minutes after half time from the penalty spot before the Green Army hit back through Lena Tice towards the end of the third quarter. The prospect of an Irish fightback increased when Hannah McLoughlin’s penalty corner found the target with nine minutes remaining, but Franzisca Hauke’s open play effort ensured that Germany’s 100% winning return remained intact.

"It was really, really tough”, said Germany goal-scorer Hauke. “Three games (for the tournament so far) in hot conditions, but we trained for that for three years and now we are strong on the field and really happy that we won three games.”

Ireland’s Anna O’Flanagan said: "We really took the game to the Germans today and at times they looked shaky, and we had them rattled. We know that we can perform on our day against any team in this competition and we're just building now through the group stages and getting another win under our belts means we're into the quarter-finals.”

New Zealand’s Black Sticks dropped their first points of the competition, falling to defeat against the Red Sticks of Spain, who have re-ignited their own hopes of a quarter-final berth with today’s victory. New Zealand are currently second in Pool B, level on points with Australia but having played a game more. Spain are currently fourth in the table with three points, Argentina (3), China (3) and Japan (0) playing their games in hand in the evening session.

Spain were excellent in the first two quarters, deservedly opening up a two goal lead through a field goal from Belen Iglesias – who punished some sloppy New Zealand defending with a close range finish – and Lola Riera’s deflected penalty corner drag-flick. The Black Sticks made a great start to the second half and pulled a goal back early when Kelsey Smith’s cross-shot flew into the goal via a Spanish stick. However, Spain produced a fine defensive display in the latter stages to claim a crucial three points, giving them great confidence ahead of their two remaining pool matches. The victory was even more special for Berta Bonastre, who made her 200th international appearance for the Red Sticks.

"It's so important for us this win because we think that last (two previous) matches we played good but the goals didn't come”, said Spain’s Maria Lopez. “Now we have more confidence than before and it's a step for the rest of the games."

The evening matches will see the completion of the third round of games in Women’s Pool B, with hosts Japan facing in-form Australia while Argentina take on China. There are also two matches from Men’s Pool A, with Japan doing battle with Spain and top of the table Australia in action against Oceania rivals New Zealand as the race for the quarter-final positions continues.