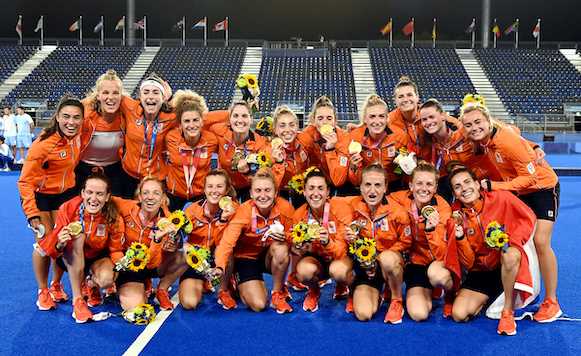 Day 14 (Evening): The Netherlands added the Olympic gold medal to their World, European and FIH Hockey Pro League titles thanks to a 3-1 victory over Argentina, bringing a wonderful Hockey competition at the Olympic Games Tokyo 2020 to a close.

The win gave the Oranje their fourth Olympic crown, with the 2020 gold medal being added to those collected at Los Angeles 1984, Beijing 2008 and London 2012. For team captain Eva de Goede and star attacker Lidewij Welten, it is a third Olympic gold medal and a fourth in total, with both players having been part of the triumphant campaigns in 2008 and 2012 as well as winning silver at Rio 2016.

It is a fitting reward for a Netherlands side that has been the dominant force of women’s international hockey for the past five years, with the team coached by Alyson Annan – herself a double Olympic hockey gold medallist with Australia - absolutely justifying their position as pre-competition favourites.

Argentina made life incredibly difficult for the Netherlands in the first period, although Caia van Maasakker came close to opening the scoring when her penalty corner drag-flick rattled the Argentine crossbar.

The third quarter was decisive, with the Oranje opening up a three-goal lead that would prove too great a mountain for Las Leonas to climb. Margot van Geffen’s superb penalty corner tip-in broke the deadlock in the 23rd minute, before van Maasakker scored two unstoppable penalty corner drag-flicks to put the Dutch into a commanding lead.

Argentina battled hard in an attempt to claw back the situation but found clear goal-scoring opportunities few and far between thanks to the magnificent Dutch defensive line, which only conceded four times in their eight matches here in Tokyo. It was a deserved success for a team that is without question the best in the world, with Argentina having to settle for a third Olympic silver following their final defeats at Sydney 2000 and London 2012.

“It's amazing - I'm a bit speechless, I'm sorry, I just can't believe that we actually did it”, said Netherlands captain Eva de Goede after the match. “We worked so hard for it, just like every other team. My fourth Olympics, fourth time in the final, and to win my third gold medal is just something that you not even dare to dream of.

“And I'm so happy that after five years ago when we won the silver medal that I can give this gold medal now to the team, to the girls who won the silver there. It's just the best feeling ever.”

When asked about how proud she was to captain this team, de Goede said: “It's almost an easy job for me. It's just great to play in a team that's willing to do better every training, every time we see each other we invest so much time in each other. We are each other's friends, we have each other's backs, just can't be better than this.

“You really see a team playing every single time you step on the pitch and that's what I'm most proud of, and that's why I actually started to play hockey because it was most fun to play in a team, and this is it for me.”

Argentina captain Noel Barrionuevo said: “I'm feeling sad, but at the same time I'm also feeling happy because at the end we were able to reach an Olympic final, this is something amazing, and we were also able to take the silver home. It was a pretty close game. We were facing a very dynamic rival. They scored their goals very quickly, so we were not able to recover from that.”

On how proud she is to win a silver medal for Argentina, Barrionuevo said: “I'm feeling proud, really proud. I'm very proud to represent Argentina here. I'm also proud of the team, and at the end right now I'm feeling like a privileged person.”

Earlier in the day, Great Britain’s women secured their third successive Olympic medal by edging India 4-3 in a hugely entertaining bronze medal match. The London 2012 bronze and Rio 2016 gold medallists were given a huge test by the Indian team, fighting back from 3-2 down to win 4-3 thanks to strikes from captain Hollie Pearne-Webb and Grace Balsdon in a contest played in sweltering conditions.

It is Great Britain’s fourth Olympic medal, having also medalled at Barcelona 1992 with a 4-3 victory against Korea. It is also a first Olympic medal for Great Britain head coach Mark Hager, who took New Zealand's women to the bronze medal games at both the London 2012 and Rio 2016 Olympics but suffered defeat on both occasions. It is a third Olympic medal for defender Laura Unsworth, who was also part of the London and Rio campaigns.

While defeat left India’s players and coaching staff clearly heartbroken, the team captained by Rani and coached by Sjoerd Marijne can leave Tokyo feeling incredibly proud of their achievement, matching their previous best Olympic finish of fourth, which came at Moscow 1980.

For all information about the hockey competitions at the Olympic Games Tokyo 2020, visit https://olympics.com/tokyo-2020/olympic-games/en/results/hockey/olympic-schedule-and-results.htm.