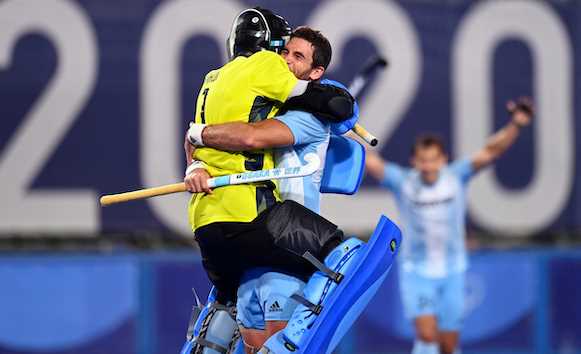 Day 7 (Evening): Reigning Olympic gold medallists Argentina kept their title hopes alive by qualifying for the competition quarter-finals thanks to a battling victory over New Zealand as the men’s pool phase came to a dramatic conclusion.

Argentina’s win against the Black Sticks ensured a third-place finish in Pool A, behind winners Australia and second-placed India, with Spain – who claimed a dramatic 1-1 draw against Australia earlier in the day – taking the fourth qualification spot, with New Zealand and hosts Japan both eliminated.

Germany produced a superb performance to defeat the Netherlands 3-1, a result which saw them finish second in Pool B behind winners Belgium, who drew 2-2 with Great Britain. GB and the Netherlands finished Pool B placed third and fourth respectively.

The line-up and timings for the quarter-finals – which take place on Sunday 1st August – as well as the progression into the semi-finals is as follows. All times are Japan Standard Time (GMT / UTC +9).

Japan 3-5 India
India completed the pool phase with four wins out of five to ensure that they enter the quarter-finals in confident mood, beating eliminated Japan 5-3. The Samurais finished their Pool A campaign in sixth place with one point, but their thrilling attacking style and fighting spirit will live long in the memory of all who have seen them in action at the Olympic Games Tokyo 2020.

India established a 2-0 advantage thanks to goals form Harmanpreet Singh and Gurjant Singh before the extraordinary Kenta Tanaka fired home a glorious field goal to leave Japan within striking distance going into the second half. The Samurais levelled the scores three minutes into the second half when a fine passing move ripped through the India defence and allowed Kota Watanabe to score. However, India hit back immediately thanks to an instinctive deflection from Shamsher Singh before Nilakanta Sharma and a second for Gurjant put India into an unassailable lead. Japan scored a third thanks to more fabulous attacking work from Kenta Tanaka, who stole possession from an Indian defender to allow Kazuma Murata a simple goal on the backhand.

"We just wanted to keep that winning rhythm and we just wanted to take this positivity into the quarter-finals”, said goalkeeper PR Sreejesh. “That was a good match and we are really happy to win that match, but still there is room to improve."

Japan’s Shota Yamada said: "We have been practising a lot on our defending. Through this tournament I think our Japanese team has performed very well with that defending. We have been playing a lot of teams and those teams are all ranked above us. We have gained a lot of experience and the most important thing is I don’t give up on everything."

Argentina 4-1 New Zealand
It was a case of winner takes all in this meeting between reigning Olympic champions Argentina and New Zealand, with Los Leones claiming the victory that they needed to qualify for the quarter-finals and keep alive their dream of defending the gold medal they won at Rio 2016. It was a heartbreaking way for New Zealand’s Tokyo 2020 campaign to end, with the Black Sticks finishing 5th in Pool A with four points from five matches.

New Zealand took an early lead when Kane Russell dispatched a typically emphatic penalty corner drag-flick in the 14th minute, although Los Leones needed just 60 seconds to find an equaliser as Lucas Martinez fired home. Goals from Lucas Vila and Jose Tolini, in the second and third quarters respectively, put Argentina in the driving seat. With the clock ticking down, Argentina went for broke and replaced goalkeeper Leon Hayward with an outfield player. However, it was the Argentineans who benefitted from the move when Nicolas Keenan raced onto an overhead pass and volleyed into an empty net, completing a superb victory and triggering wild celebrations from all members of the Argentine contingent.

New Zealand captain Blair Tarrant said: "It's pretty tough. Losing at the Olympics in this fashion is not something you enjoy. We had hopes at this tournament. I think we showed glimpses but we didn't do it for long enough."

Germany 3-1 Netherlands
Germany bounced back from their shock defeat at the hands of South Africa to record a fine 3-1 victory over the Netherlands, the team that beat them in the final of June’s European Championships. The result meant that Die Honamas would finish higher in the Pool B standings than the Oranje, although their final positions were not known until the result of the Belgium versus Great Britain match was confirmed.

The match itself was tense and frenetic, with both teams fully aware about how important three points could be in determining their respective paths towards the medal matches. It was Germany who struck the first blow, with Niklas Wellen deflecting a cross from Martin Haner into the roof of the Netherlands goal ten minutes into the first quarter. Die Honamas extended their lead towards the end of the third period through another close-range deflection, with Constantin Staib touching home before Timm Herzbruch netted a third with a cracking backhand drive. Jeroen Herzberger’s blistering volley in the 59th minute proved only a consolation, with Germany – who fell to a surprise 4-3 defeat to South Africa in their previous outing – seeing out a win which will only serve to boost confidence levels going into the knock-out phase.

“The South Africa game clearly showed us some problems and we set out to do exactly those things better”, said goal-scorer Timm Herzbruch. “We succeeded 100 percent. The Dutch had hardly any chances in the entire game because we defended them extremely well. So I can say with full conviction that it was a win that was more than well deserved. I'm really looking forward to the knockout phase. "

Belgium 2-2 Great Britain
Pool B winners Belgium were given their sternest test of the competition so far, with Great Britain holding the World and FIH Hockey Pro League champions to a 2-2 draw. Great Britain twice led in a remarkable clash between two European heavyweights, with the Red Lions fighting back on each occasion to take a share of the spoils. While the outcome of the match would not change anything for Belgium, who had already won the pool before today’s play had even started, it was a massive result for GB, with the point being enough for a third-place finish and a quarter-final match against Pool A runners up India.

Rupert Shipperley’s close range finish gave Great Britain the lead in the 17th minute, and it was an advantage that they held until Tom Boon restored parity with a 37th minute penalty corner. GB hit back almost immediately thanks to a fantastic flicked finish from Liam Ansell after great work from Sam Ward, but Belgium claimed a share of the spoils when Thomas Briels touched home two minutes before the end of the third quarter.

South Africa Women’s player Onthatile Zulu was given a one match suspension by the International Hockey Federation (FIH) for a breach of the FIH Code of Conduct (for reckless or careless physical contact between players in the course of play) during today’s match South Africa v. Germany. The suspension will be served during South Africa’s next match v India scheduled tomorrow, 31 July, at the Oi Hockey Stadium, in Tokyo. Consequently, in accordance with the FIH Competition Regulations for the Tokyo 2020 hockey events, South Africa’s squad will be reduced by one player – and therefore consist of only 15 players - for this match.