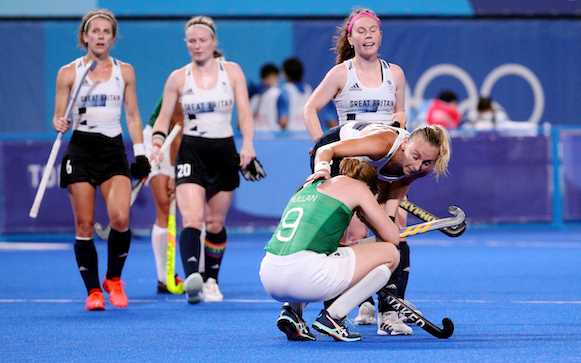 Day 8 (Evening): Olympic debutants Ireland missed out on a place in the quarter-finals of the Olympic Games Tokyo 2020 Hockey competition, suffering a heart-breaking defeat to reigning champions Great Britain in the final match of the women's pool phase.

Following India’s dramatic 4-3 win over South Africa earlier in the day, the Green Army went into the match against the Rio 2016 gold medallists knowing that only a victory – even by the narrowest of margins - would be enough to secure a place in the knock-out stages. However, it was not to be for the Irish, whose Olympic dream ended with a 2-0 loss.

The first match of the evening session saw the Netherlands confirm their status as the winners of Pool A with a 3-1 triumph over Germany, who finished second in the standings.

The line-up and timings for the women’s quarter-finals – which take place on Monday 2nd August – as well as the progression into the semi-finals is as follows. All times are Japan Standard Time (GMT / UTC +9).

Germany 1-3 Netherlands
Just like Pool B winners Australia, the Netherlands claimed a maximum 15 points from Pool A, topping the group thanks to a 1-3 victory over Germany.

Both the Oranje and Die Danas came into the match with 100% winning runs, with the Netherlands ahead in the standings due to a superior goal difference. Even though a draw would have been enough to win the pool, the team clearly went all out to continue their winning streak. Their positivity was quickly rewarded, with Frederique Matla scoring the opening goal just eight minutes in with a deflected penalty corner before the ever-lively Lidewij Welten added a second with a tip-in just before the end of the first quarter.

Germany pulled a goal back in the second quarter thanks to a low penalty corner drag-flick from Sonja Zimmerman, who fired between the legs of Netherlands shot-stopper Josine Koning to rattle the Dutch backboard. It was the Netherlands who had the final say, however, with Welten brilliantly carving out an opportunity for Matla to skip past impressive Germany goalkeeper Julia Sonntag before passing into an open goal.

The Oranje finished the pool phase having scored 18 goals and conceded just two.

"It was amazing, so happy with the win”, said Netherlands captain Eva de Goede. “I think we really played well, really played how we can play. I think we can even play a bit better as in be more consistent throughout the whole game, but very happy with our performance and a great win for us.”

Ireland 0-2 Great Britain
Great Britain proved just too strong for Ireland, a team that started the competition with a victory but ended up unable to pick up the points they needed to progress into the latter stages of the competition.

The two teams cancelled each other out in the first quarter, but Great Britain came out firing in the second and were rewarded when Susannah Townsend pounced on a loose ball to net from a penalty corner situation. Ireland rallied, but fell further behind just after half time when Hannah Martin – who has been in fine form for GB throughout their Tokyo campaign – brilliantly guided Ellie Rayer’s cross from the right into the net.

Ireland gave everything they had in the latter stages of the game but could not get the breakthrough that they needed, as their participation in the Olympic Games Tokyo 2020 came to an end.

Reflecting on the competition, Ireland captain Katie Mullan said: "We did ourselves proud, we did our country proud and there's a number of the girls that probably this was their last international game with us, so emotional in that sense. The end of an era.

"We're actually history-makers in the sense we're the first female team in any sport to represent Ireland, so that's huge for us and I don't really think that will fully sink in until we do go home and hopefully get a nice warm welcome from everyone at home.

"We always aim high and we always want to break boundaries and the aim was a quarterfinal, so it leaves us hungry hopefully for Paris (2024)."

It was a milestone match for Ireland’s Nikki Daly, who made her 200th appearance for the Green Army.


The Olympic Games Tokyo 2020 Hockey competition continues on Sunday 1st August with the men’s quarter-finals. The first match of the day (09:30 JST) sees recent European silver medallists Germany, who finished second in Pool B, face reigning Olympic champions Argentina, the third ranked team in Pool A. That contest is followed by a mouth-watering clash between Pool A winners Australia and European champions the Netherlands, who finished fourth in Pool B, at 12:00. The winner of the Germany vs Argentina match will face a semi-final game against either Australia or the Netherlands.

The evening’s matches at the Oi Hockey Stadium features Pool B winners Belgium up against Spain, who finished fourth in Pool A, at 18:30. The last match of the day sees Pool A runners up India – the eight times Olympic gold medallists – taking on Great Britain, who finished 3rd in Pool B, at 21:00. The winner of the Belgium vs Spain match will face either India or Great Britain in the competition semi-finals.