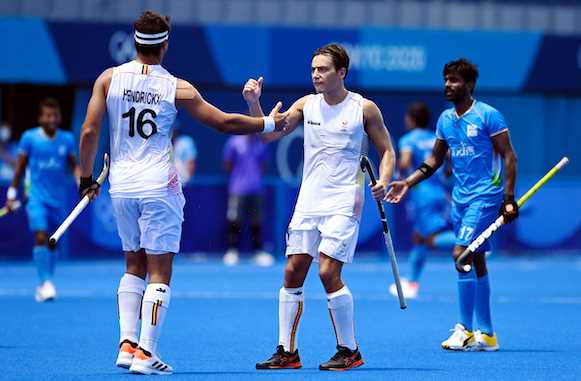 Belgium’s opponent in the gold medal match will be revealed this evening, with Australia and Germany doing battle in the second semi-final.

With International Olympic Committee (IOC) President Dr Thomas Bach watching from the stands, Belgium and India produced a sensational contest that was far closer than the final score would suggest.

Despite the searing temperature on the field of play in this morning fixture, the quality and pace of the match between two undisputed heavyweights was there for all to see, with Belgium making a fine start thanks to a perfectly executed penalty corner drag-flick from Loick Luypaert just 70 seconds into the contest.

However, India hit back with two quickfire goals to take a 2-1 lead into the quarter time break, with Harmanpreet Singh rattling the backboard with a penalty corner before Mandeep produced a stunning backhand strike from open play.

Belgium restored parity when Alexander Hendrickx – who finished the game with a remarkable tally of 14 goals in seven matches – fired home an unstoppable penalty corner drag-flick, ensuring the Red Lions were level at half time in this thrilling contest.

While the score-line remained locked at 2-2 throughout the third quarter, Belgium were starting to dominate and would surely have been ahead were it not for some outstanding defending from India. However, they could not stop Hendrickx from determining the outcome of the match, with the defender slamming home a penalty corner before winning and converting a penalty stroke to put his side 4-2 ahead with seven minutes remaining.

India went for broke in the dying stages, replacing goalkeeper Sreejesh with an outfield player in a bid to outnumber the Belgian defence. However, the Red Lions held firm, with John-John Dohmen adding gloss on the victory when he passed into an open goal with just six seconds remaining.

India – who will now take part in the bronze medal match on Thursday morning – were superb throughout, but it was Belgium who sealed their place in the title match, where they will be aiming to go one step higher than the silver medal achieve at Rio 2016.

“It's unbelievable", said Belgium's John-John Dohmen. "Olympic medal is always the best memories we can have and now we will enjoy for 15 minutes maybe and then recover really well for the final because the gold is the objective. So it's not finished.”

Commenting on hat-trick hero Hendrickx, Dohmen said: “I love this guy, he's amazing. Always nice with the teammates and always ready to work really hard for the team. And this tournament is his tournament, of course, and I'm really happy for him. It's amazing.”

India captain Manpreet Singh said: "It is really hard for me right now because we came with a winning mindset, but unfortunately we didn't win the match. In the second quarter we fell back, where they created good opportunities and got a PC. Now we need to focus on our next bronze-medal match and we need to work and we need to get the medal."