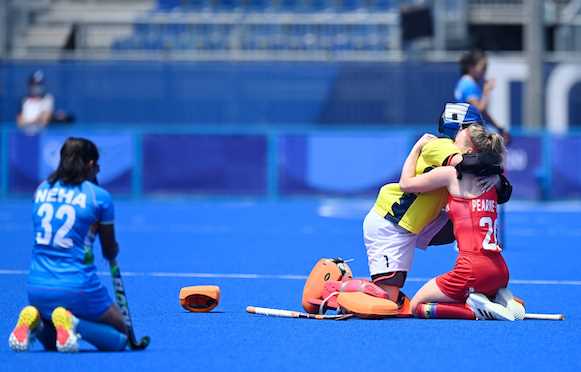 The London 2012 bronze and Rio 2016 gold medallists were given a huge test by the Indian team, fighting back from 3-2 down to win 4-3 thanks to strikes from captain Hollie Pearne-Webb and Grace Balsdon in a contest played in sweltering conditions.

It is Great Britain’s fourth Olympic medal, having also medalled at Barcelona 1992 with a 4-3 victory against South Africa. It was also a first medal for Great Britain head coach Mark Hager, who took New Zealand's women to the bronze medal games at both the London 2012 and Rio 2016 Olympics but suffering defeat on both occasions. It is a third Olympic medal for defender Laura Unsworth, who was also part of the London and Rio campaigns.

While defeat left India’s players and coaching staff clearly heartbroken, the team captained by Rani and coached by Sjoerd Marijne can leave Tokyo feeling incredibly proud of their achievement, matching their previous best Olympic finish of fourth, which came at Moscow 1980.

Despite the on-field temperature reaching 43 degrees Celsius – a situation that lead to the implementation of not only extended quarter time breaks but also mid-quarter hydration breaks – the contest between the two teams was nothing short of thrilling.

Both teams had chances to score in a goal-less first quarter before a flurry of goals arrived in the second period, with Great Britain’s Ellie Rayer and Sarah Robertson – who struck a diving backhand into the goal via the left post – opening up a 2-0 lead.

A captain’s goal from Hollie Pearne-Webb levelled the scores with a rare but high-quality strike from open play five minutes after half time, with the game’s decisive moment coming from the stick of Grace Balsdon early in the fourth quarter, sending a low penalty corner drag-flick between the legs of India goalkeeper Savita.

"This is definitely up there”, said GB’s Laura Unsworth on winning her third Olympic medal. “This has probably been my most challenging cycle since I first started, so on a personal note this is probably the most special medal out of all three of them. It has been a tough five years and to come away with a bronze medal to top it all off is just what dreams are made of."

Talking about his message to his team after the defeat, India head coach Sjoerd Marijne said: “The first thing I said, like for me personal, first the emotion is about losing, yeah you want to win, but really first off that I feel proud. Pride. I'm proud of the girls, how they again showed their fight and skills. And normally when Indian woman team came 2-0 behind they always went 3-0, 4-0, and now they kept fighting. We came back in the match, we even were one up.

“And I said to the girls, 'Listen, I can't take away your tears. No words will help for that. We didn't win the medal, but I think we achieved something bigger, and it's inspiring a country and make the country proud.' And I've shown many messages of people who were saying that, and I think the world have seen another Indian team, and I'm really proud of that.”

The women’s Hockey gold medal match begins at 19:00 and will see hot favourites the Netherlands taking on Argentina. The Dutch are now just one win away from being in possession of the World, European, FIH Hockey Pro League and Olympic titles. However, they are not expected to have everything their own way against Las Leonas. Fascinatingly, Argentina were the last team to beat the Netherlands, inflicting defeat on the Dutch during their FIH Hockey Pro League encounter in Buenos Aires in February 2020, with the Oranje claiming a 3-1 victory the following day.

The gold medal game will be umpired by Laurine Delforge (BEL) and Sarah Wilson (SCO), with Amber Church (NZL) and Kelly Hudson (NZL) the reserve umpire and video umpire respectively.