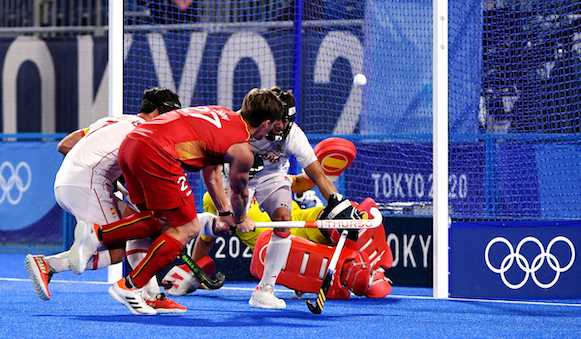 Day 9 (Evening): Belgium and India joined Germany and Australia in the semi-finals of the men’s Hockey competition at the Olympic Games Tokyo 2020 after winning their respective quarter-final matches on Sunday evening to establish two mouth-watering clashes in the final four.

Pool B winners Belgium were given a huge scare by a Spanish team that finished fourth in Pool A but were magnificent this evening, holding a 1-0 lead before the reigning world champions and Rio 2016 silver medallists fought back to claim a 3-1 win. Tournament top scorer Alexander Hendrickx scored twice to take his personal tally at these Olympics to 11 goals in six games, moving him five goals clear of nearest rival, Blake Govers of Australia.

Belgium’s semi-final opponents will be India, who defeated Great Britain 3-1 to reach the semi-finals for the first time since winning the last of their eight Olympic gold medals way back at Moscow 1980.

The other semi-final will see Australia taking on Germany after their respective quarter-final victories over the Netherlands and Argentina earlier in the day.  Interestingly, the teams placed one to four in the FIH World Rankings have all made it through to the semi-finals – Australia (1), Belgium (2), India (3) and Germany (4).

The timings for the men’s semi-finals, which take place on Tuesday 3rd August, are as follows. All times are Japan Standard Time (GMT / UTC +9).

More information about this evening’s semi-finals can be found below.

Belgium 3-1 Spain
A fourth place finish in Pool A did not stop Spain’s Red Sticks from giving Pool B winners Belgium their toughest match of the Olympic Games Tokyo 2020. However, it was the Red Lions – the reigning world and FIH Hockey Pro League champions – who came away with a victory to keep their gold medal dream alive.

Spain took the lead in fortuitous fashion, with David Alegre’s attempted pass from the left being diverted into the goal via a Belgian stick, giving sensational Red Lions goalkeeper Vincent Vanasch – who made numerous world class saves on the occasion of his 250th match – little chance of saving.

While there was more than an element of luck in the goal, there can be little argument that their all-round performance in the opening two quarters was at least on par with the brilliant Belgians, who were given a stern test by their rivals from Europe.

However, everything changed in the third quarter, with competition top scorer Alexander Hendrickx having a big say in the outcome of the contest. Hendrickx – playing with a head bandage to protect stitches as well a heavily strapped shoulder – tied the scores with a 38th minute penalty corner before making an important contribution to his team’s second goal, forcing a fine penalty corner save from Spain goalkeeper Quico Cortes, who then denied Sebastien Dockier’s follow-up before Tom Boon smashed the loose ball into the roof of the goal.

Hendrickx scored his 11th goal of the tournament three minutes from time, sending a penalty corner bullet inside the left post to ensure Belgium’s safe passage through to the final four.

"Spain came out in a really good way”, said Belgium’s Loick Luypaert. “We struggled a little bit in the first half to get a real few chances. But I think we've played a really, really good tournament and we played a mature game in the end. A couple of difficult moments in the end but happy to win it."

Spain’s Alvaro Iglesias said: “We knew it was going to be tough. We knew we had to defend really hard and counter-attack. I thought we had chances, but their keeper was great. It was a pity we did not score more goals. We deserved better.”


India 3-1 Great Britain
India’s dream of winning a first Olympic gold medal for 40 years moved a step closer to reality in the final match of the day, battling to a quarter-final win against Great Britain.

India opened up a two-goal lead in the contest through superbly taken field goals from Dilpreet Singh and Gurjant Singh, with Great Britain guilty of some sloppy defending on both occasions to trail 2-0 going into half time.

Great Britain were the better team in the third quarter but found a breakthrough hard to come by, as India successfully defended a string of penalty corners. The pressure eventually told with the final play of the period, with Sam Ward somehow squeezing a penalty corner flick into the goal despite slipping at the vital moment.

Ward’s strike gave Great Britain a huge boost in confidence, with the team proceeding to dominate the majority of the fourth quarter. Their cause was enhanced further when India captain Manpreet Singh received a yellow card five-minute suspension. However, a rapid India break-away proved to be the killer blow, with Hardik Singh firing into the bottom right corner to seal India’s first Olympic semi-final berth since winning gold at Moscow 1980.

"We are so happy because after a long time we are reaching a semi-final", said India skipper Manpreet Singh. "Still, the business hasn't finished yet. Still we have two more games so we need to focus, we need to have our feet on the ground and we need to focus on the next match."

Great Britain's Sam Ward said: "I think anytime any game that knocks you out of the Olympic Games will sting you pretty hard. We had a lot of chances we did not take. There is one thing turning up an Olympic Games and another to win a medal, and that is what we came for and is pretty gut-wrenching to be knocked out.”