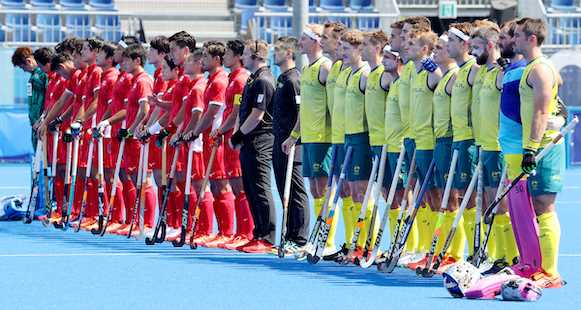 Day 1 (Morning): The first four matches of the Olympic Games Tokyo 2020 Hockey competition took place on Saturday morning, with the men of Australia, India and Belgium all recording wins in their opening matches. More information about the matches can be found below.

Japan 3-5 Australia
Australia made a winning start to their quest for a second men’s hockey Olympic gold medal with a 5-3 victory over hosts Japan, but were given a real scare by the Samurais in a pulsating opening match at the Oi Hockey Stadium. Tim Brand and Tom Craig put the Kookaburras into a 2-0 lead at the end of the first quarter, but a double from Kenta Tanaka either side of a strike from Yoshiki Kirishita gave Japan a shock 3-2 lead at half time. However, Australia controlled the third and fourth quarters, with Blake Govers, Aran Zalewski Daniel Beale all on target as the world number one ranked side claimed all three points.

"Obviously we wanted to do a bit better”, said Australia’s Daniel Beale. “We go 2-0 up, then go 3-2 down going into half-time (which) is obviously not what we want to do. So it was really good that we were able to come out after half-time and get back to what we were doing well and just get the result."

Japan’s Kenta Tanaka said: "We were close to overtaking the Australian team in the heat of the match but in the end we lost so there is a bit of regret. But we have to take this momentum to the next match. Scoring two goals gives me a huge amount of confidence."

Eight times Olympic gold medallists India got their competition off to a winning start by edging past a gritty New Zealand team, claiming a 3-2 triumph. Kane Russell put the Black Sticks ahead with a penalty corner before Rupinder Pal Singh tied the scores from the penalty spot. Penalty corner goals either side of half time from Harmanpreet Singh established a 3-1 lead for India, although Stephen Jenness’s field goal set up a tense final quarter. However, India held on for victory.

“Winning three points in a competition like the Olympic Games is really important”, said India head coach Graham Reid. “I think we had a good second and third quarter but the first and fourth we struggled a little bit. When we watch the video later today, we will be able to find out what we need to get better at and surely there are going to be things we learn from today too.”

Reigning Olympic champions Argentina could only claim a solitary point were held to a 1-1 draw by Spain. Los Leones took the lead midway through the second quarter thanks to Agustin Mazzilli’s field goal. Fascinatingly, Mazzilli scored Argentina’s last goal in Olympic competition, netting Argentina’s fourth against Belgium in the Rio 2016 final. However, Argentina could not add to their tally and Spain, who were competitive throughout, claimed a crucial point when Pau Quemada rattled home a penalty corner eight minutes from full time.

Netherlands 1-3 Belgium
Alexander Hendrickx scored a four-minute hat-trick to help reigning World champions Belgium fight back from a goal down to beat Low Countries rivals the Netherlands 3-1 in the opening match of Pool B. Following a quiet opening two periods, Jeroen Hertzberger scored a wonderful individual effort to put the Oranje ahead early in the third quarter, but it was Hendrickx who would have the final say in the outcome. Hendrickx netted two outstanding penalty corners either side of a penalty stroke as Belgium made a clear statement of intent with a hard-earned victory.

When asked how he feels about being considered as one of the best drag-flickers in the world, Hendrickx said: “I don’t think about that, what others think, I’m busy with what I do with my technique with flicking, thinking about something during the flick and then all the pressure falls away."

Netherlands captain Billy Bakker said: "It’s not the result that we want, but it’s also not the way we want to perform as a team and that’s more something that we’re not really disappointed (about), but we need to be more focused on our own quality.”

The action at the Oi Hockey Stadium continues this evening with a further four matches. In Men’s Pool B, Great Britain take on South Africa whilst Canada face Germany. There are also two matches in Pool A of the women’s competition as reigning World, European and FIH Hockey Pro League champions the Netherlands take on India and Olympic debutants Ireland play South Africa.