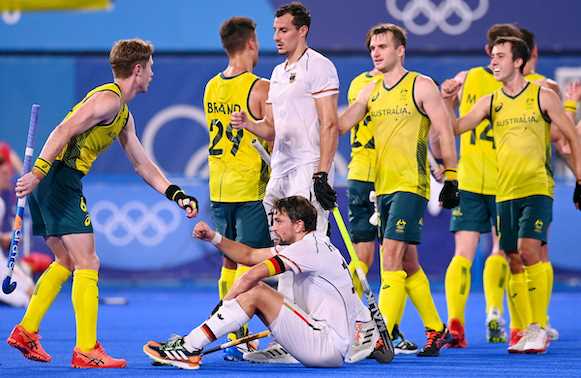 Day 11 (Evening): The men’s Hockey gold medal match at the Olympic Games Tokyo 2020 will be contested between the two highest ranked teams in the world, with Australia set to face Belgium in a dream title match here at the magnificent Oi Hockey Stadium.

Goals from Tim Brand, Blake Govers and a late tap-in from Lachlan Sharp put the mighty Kookaburras into their first Olympic final since Athens 2004, when Jamie Dwyer famously scored a dramatic golden goal to win Australia’s only Olympic gold medal in men’s hockey, something they will be determined to change here in Tokyo.

The bronze medal match between Germany and India will be played on Thursday 5 August at 10:30 JST. Germany will be aiming to match the third place finish they achieved at Rio 2016, with India looking for a first Olympic medal since Moscow 1980.

Many thought that it would be difficult for this evening’s semi-final to live up to the brilliance of the morning’s incredible encounter between Belgium and India. However, the clash between Australia and Germany was another sensational contest between two teams playing at the very top of their games.

The two teams went hard at each other throughout the second period, but it was Australia who put their noses in front again when Blake Govers netted his seventh goal at Tokyo 2020 with a typically fierce penalty corner drag-flick.

The Australian defence – marshalled by goalkeeper Andrew Charter and central defender Matt Dawson – were outstanding in the third and fourth periods, repelling numerous attacks as Germany threw everything they had at their opponents.

The result was eventually sealed in 59th minute when Tom Wickham broke through Germany’s last line of defence and supplied Lachlan Sharp, who tapped into an empty net after Die Honamas had replaced goalkeeper Alexander Stadler with an outfield player in a last-ditch attempt to turn the situation around.

“It was great to get the result … what a great occasion and a great moment”, said Australia captain Aran Zalewski, who made his 200th international appearance this evening, before commenting on when his team will start focussing on the gold medal match. “I think we’ll enjoy tonight’s win. We’ve still got 48 hours I think before the game. We’ll stay the course, do what we usually do – recover, de-brief tonight’s game and move on sometime tomorrow and start looking at Belgium really closely.”

Looking ahead to the Belgium match, Kookaburras head coach Colin Batch said: “The hockey fans are in for a real treat, aren’t they. The last time we met each other in a final was in the Pro League in 2019. This will be very different. Both teams have fought their way through some difficult matches to get to the final, and it is not easy these days as there are a lot of good teams around. They [Belgium] would have been pleased with their win this morning against India, so I think it will be a great game and two very good teams.”

Reflecting on his team’s defeat, Germany’s Mats Grambusch said: “We have to recognize that we are not dangerous enough in the opponent's circle compared to Belgium and Australia. Australia has this quality of scoring goals with few chances. We are simply not making enough of the many opportunities and corners. In the end, what counts is what is on the scoreboard - it is of no use to you if you were superior. But we will also get out of this situation and get bronze on Thursday! "

Wednesday 4 August is women’s semi-finals day, which begins with a re-match of the gold medal game from the Rio 2016 Olympic Games. Reigning World, European and FIH Hockey Pro League champions the Netherlands will be heavy favourites against title holders Great Britain but, as we have already seen here in Tokyo, nothing can be predicted.  The two sides go head-to-head at 10:30 JST, with the second semi-final – between Argentina and surprise package India – being scheduled for 19:00. Las Leonas are aiming to reach the Olympic final for a third time, having claimed silver at both the Sydney 2000 and London 2012 Olympic Games. India’s sensational 1-0 quarter-final triumph over Pool B winners Australia provides enough evidence that they should not be underestimated.