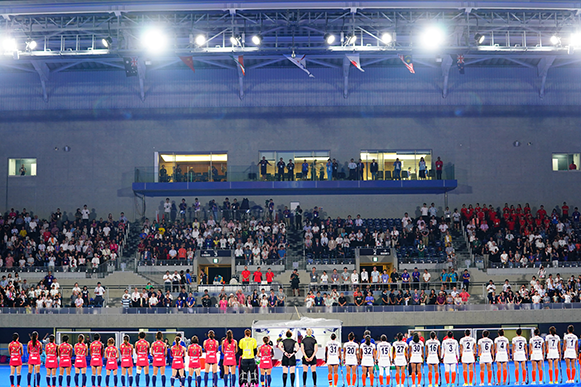 Monday 4 January 2021 marks exactly 200 days until the start of the Olympic Games in Tokyo, Japan. As everybody knows, the Games of the XXXII Olympiad were originally set to take place in July-August 2020, before the impact of the Covid-19 global health pandemic forced the prestigious multi-sport event to be postponed by one year, the first time that a Summer Olympic Games did not take place in its scheduled year since World War II.

The seriousness of the Covid-19 situation meant that postponement was completely unavoidable, bringing us into uncharted territory. 2021 is the Olympic year that nobody expected. The Olympic crowns of Argentina men and Great Britain women are going unchallenged for 12 months longer than any hockey gold medal-winning nation since the London Olympics in 1948, where India men successfully defended the title they won some 12 years earlier at the 1936 Olympics in Berlin, Germany.

The Olympic Games are the pinnacle of any athlete’s sporting careers; for sports fans an opportunity to immerse themselves for two weeks of the most incredible action imaginable, watching over 11,000 athletes competing in 33 different sports. Hockey has always been incredibly proud to be part of the Olympic family. Our brilliant sport has featured at every Olympic Games played since Amsterdam 1928, with the upcoming event in Tokyo being the 24th appearance in the 26 modern Olympiads since 1908.

In terms of the hockey competition itself, very little has changed from what had previously been revealed. The event will take place at the Oi Hockey Stadium, the purpose-built, state-of-the-art 15,000 seat venue (10’000 for the North Pitch and 5’000 for the South Pitch) in the Tokyo Bay Zone that will be the home of Japanese hockey for decades to come.

Although the Olympic hockey competition will now start on Saturday 24 July and conclude on Friday 6 August 2021, nothing has changed in terms of the overall running order of the matches.

The opening match of the Games will be contested between the men of Japan and Australia, with the host nation facing a stern test from the 2019 FIH Hockey Pro League champions - Olympic gold medallists at Athens 2004 - on 24 July (09:30 local time).

The opening match of the women’s tournament will be played on the same day, with reigning world champions and current world number one the Netherlands - Olympic champions in 1984, 2008 and 2012 - taking on India (20:45 local time).

The men’s and women’s gold medal matches will take place on 5 and 6 August respectively. The full match schedule of the Tokyo 2020 Olympic hockey tournaments can be found by clicking here. To download a PDF of the competition schedule, click here.

All of the teams that will compete in Tokyo earned their tickets by either becoming continental champions of their respective regions or via the FIH Hockey Olympic qualifiers. This includes the national teams of Japan, who on top of qualifying as hosts also booked direct tickets to the event by both becoming continental champions thanks to their gold medals at the Asian Games in Jakarta, Indonesia.

Japanese Hockey star Shihori Oikawa is looking forward for the Olympic Games in Tokyo. You can view her message in English and Japanese.

Whilst the pandemic is far from being over, the development of vaccines for Covid-19 have provided much needed light at the end of what has been a very dark tunnel. The Tokyo Olympic Organising Committee (TOCOG), the International Olympic Committee (IOC) and the Japanese authorities are working tirelessly to ensure that the Olympic Games in Tokyo can take place as safely and securely as possible for everyone who attends. It promises to be a thrilling occasion, one that Japan Prime Minister Yoshihide Suga says will offer “proof that humanity has defeated the virus”. Like the rest of the global sporting family, we simply cannot wait for the action to begin.

The pools for the Olympic hockey competitions were revealed in November 2019, with the composition being determined by the same process applied for the Olympic Games Rio 2016 (See Appendix 2).