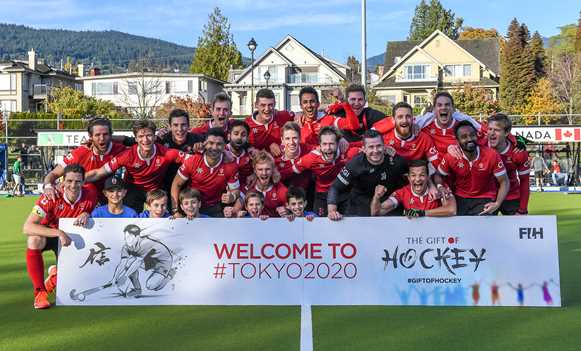 The men's international teams of the Netherlands and Canada have both secured their tickets to the Olympic Games Tokyo 2020, overcoming the respective challenges of Pakistan and Ireland in the two-game FIH Hockey Olympic qualifiers.

The Netherlands proved too strong for Pakistan in the second leg of their Olympic qualifier, with the Dutch powering to a 6-1 triumph over the Green Shirts to confirm their place at the Olympic Games Tokyo 2020. Saturday's first leg finished with the scores locked at 4-4, but the 1996 and 2000 Olympic gold medallists produced a sparking display in the second game to guarantee a 19th Olympic appearance at the expense of Pakistan, the 1960, 1968 and 1984 Olympic champions.

Canada's place at next year's global showpiece in Japan was secured in dramatic circumstance in Vancouver. Ireland came into the contest with a 5-3 aggregate lead from the first match, but a last second penalty stroke from Scott Tupper gave the Canadians a 3-1 win in the second leg to force a shoot-out in which the Canadians emerged as winners.

Amsterdam (NED) – Men: Netherlands 6, Pakistan 1 (Match 2 of 2)
The day's action began in front of a capacity crowd at Amsterdam's world-famous Wagener Stadium, where the men of the Netherlands (FIH World Ranking: 3) and Pakstan (WR:17) faced each other in a winner takes all encounter. Pakistan sensationally defied both the odds and the FIH World Rankings by coming within seconds of beating their illustrious opponents in front of their home fans, but Mink van der Weerden's last-gasp penalty corner tied the match at 4-4. However, there was to be no repeat performance, with the Netherlands producing a sensational display of attacking hockey to over-run the Green Shirts and seal their place at Tokyo 2020 at the expense of their opponents.

The Netherlands sparkled in the first half, opening up a thoroughly deserved 4-0 lead at the break. Bjorn Kellerman and Mirco Pruijser both netted stunning backhand strikes, while Mink van der Weerden bagged a brace with a penalty stroke and a penalty corner. Goals from Terrance Pieters and Jip Janssen after the break put the result beyond all doubt, before Pakistan's Rizwan Ali scored a late consolation goal.

More information about the match can be found on the live reporting link by clicking here.

Vancouver (CAN) – Men: Canada 3, Ireland 1 [5-4 After Shoot-Out] (Match 2 of 2)
A 5-3 victory in the first game meant that Ireland started today's second match with a two goal aggregate advantage, a lead that was quickly extended when John McKee put the Green Machine 1-0 up in the sixth minute. Canada's Olympic dream appeared to be fading, but goals either side of half time from Gordon Johnston and Oliver Scholfield put the hosts within one goal of levelling the aggregate score. Ireland kept the home team at bay until the final second of the fourth quarter when a penalty stroke was awarded, with Canadian captain Scott Tupper showing the calmest of heads to fire into the bottom right corner to tie the aggregate score at 6-6, triggering a shoot-out for the Olympic ticket.

Misses from Canadian pair Sukhi Panesar and Keegan Pereira helped Ireland to establish a 3-1 lead before Michael Robson and Shane O'Donoghue failed to convert, leaving the shoot-out score locked at 3-3 going into sudden death. A mistake from Ireland's John McKee gave Adam Froese the opportunity to seal victory and he made no mistake, finding the target to send Canada to the Olympic Games Tokyo 2020.

More information about the match can be found on the live reporting link by clicking  here.