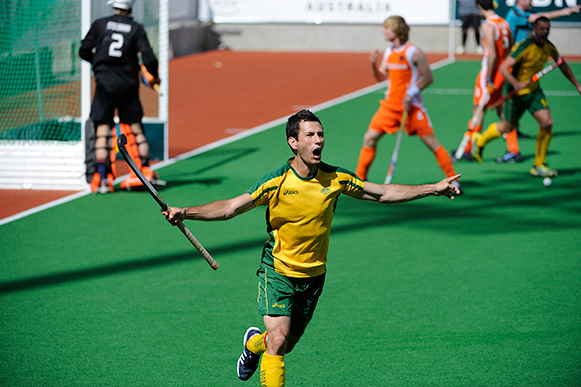 For Jamie Dwyer, 2004 was the year that changed everything. At the start of the year, Dwyer was still in the process of recovering from a career threatening injury that had left his selection for the Athens 2004 Olympic Games very much hanging in the balance.

By the end of it, Dwyer’s had permanently written his name into hockey’s history books by scoring the winning goal in the Olympic final, giving Australia’s Kookaburras their first Olympic title after nearly half a century of trying. Dwyer was later presented with the first of five FIH Men’s Player of the Year awards, with his sensational displays in Athens signalling the arrival of a genuine hockey superstar.

As part of our build-up to the Olympic Games in Tokyo later this year, Jamie Dwyer looks back on his time in Athens when the Kookaburras finally laid their hands on the biggest prize in world sport.

Jamie Dwyer, thank you so much for talking to us about the Athens 2004 Olympic Games. You went into that competition with the Kookaburras having never won an Olympic gold medal, but this was the year it would all change. What were your thoughts going into that competition in Athens?
Jamie Dwyer: “It was a bit unique, because I’d just come back from a serious injury, so I was actually just feeling lucky to be there. My [international] career had started in 2001 and was going pretty good, and then in 2003 I had a bad injury and was out for eight months, so I was lucky to make the Olympic team. For me personally, I was just happy to be there. I was quietly confident because of the personnel we had in that team, and the culture we had as a group at that stage. We had a very good coach, Barry Dancer, who was all about the team and he was guiding us perfectly. The team itself was quite young but very, very fit. I knew we were the fittest team in the world, and we had some great leaders who led from the front, and some younger guys who just followed. The culture around the group was exceptional. It was my first Olympic Games, and I just didn’t know what was going to happen. In the press conferences with the Australian reporters, they were all saying things like we had been the bridesmaids so many times, and that we had never won. My answer was ‘yeah, that’s true, but I’ve never been to an Olympics, so this is my first one and I’m going to give it my best shot’. In the end, that whole Olympics was a dream come true.”

You certainly started well, scoring three times against New Zealand. How was the pool stage of the competition, for the team and you personally?
Jamie Dwyer: “When you score a hat-trick in the first game, your confidence is up! I guess my attitude back then playing hockey was to just go for it. I was young, I was fit, so I just thought go for it. No-one knew me too well back then, and I knew them pretty well from watching them, so I felt that I had a bit of an advantage. I thought I’m in pretty good form, so I’m just going to keep going and see what happens. During that tournament, we had some ups and downs. The first game we beat New Zealand, then we drew with Argentina in the second game. We just beat India in the last ten seconds of that game, and then the last pool round we lost 2-1 to Holland. I remember after that game [against the Netherlands], it personally gave me a bit of confidence because we played really well. We hit the post three or four times. They had a couple of corners and scored a couple of goals, but we had the much better of the play. When we had the team meeting Barry Dancer said exactly what I was thinking, saying that we actually played pretty good and he showed us the points and compared our goal-shots to their goal-shots. After looking at it, I was like yeah, if we play them again, we’ve got a really good chance. It just gave me a little bit of confidence that if we do come up against the Dutch, who had won the last two Olympics and had arguably the best player in the world in Teun de Nooijer on their team, and a great penalty corner threat like Taeke Taekema, I still believed that we could beat them.  It was just their confidence. They are so confident that they can just come out and turn it on. But we changed that in the final, thankfully.”

You defeated Spain in the semi-finals and then it was the Netherlands once again in the gold medal match. You found yourself trailing 1-0 at half time thanks to a brilliant individual goal from Ronald Brouwer. What was the mood like at the break?
Jamie Dwyer: “I remember walking down the tunnel to the changing room thinking, this is unbelievable. We’ve played so well; we’ve had ten goal-shots and I think they had one corner and one goal-shot, and we are 1-0 down at half time. I was thinking that if they get another corner and put it in, it’s game over. But once we sat down in the changing room, Barry Dancer said look, we are playing really well, and we have not lost a second half performance for the last 30-something games we’ve played. I was like, ‘wow’! I didn’t know it if was true or not, but I believed it at the time! Anyway, it gave me confidence that we were going to run over them. I knew they were struggling; I knew they weren’t as fit as us. I just hoped that we had a few chances and have a bit of luck go our way. We had no luck in that first half. I’ve watched the game back a couple of times since then, once quite recently actually, and jeez we dominated that game from the start to the finish. If we didn’t win that game, we were never going to win one.”

You snatched an equaliser early in the second half, where you set up Travis Brooks to fire home on the backhand. Talk us through that moment and what followed!
Jamie Dwyer: “Brent Livermore made an unbelievable pass to me, and I hang out my stick and made a back-stick trap before passing it to Travis Brooks, who scored from pretty close to the baseline. It was a pretty good shot. It was just those little instances which you practise every single day, it worked out right there [in that moment]. I could have easily missed that trap, and Travis could have easily missed that shot, and I wouldn’t have a gold medal sitting in my cupboard at home here. Those little things that you train every single day, if you really pay attention to them and practise them, they pay off in the big moments.

“Then extra time comes, and we get a [penalty] corner right at the end of the first period. The call from the coach was that the ball was coming to me. I was thinking about changing it in the huddle, saying that maybe we should just flick the ball – I’d had a couple of opportunities in normal time. I said maybe we should just flick it and get the ball in the goal. The penalty corner guy thought it was a great idea! But I think it was Brent Livermore who said no, let’s just stick to the call and trust the coach. Once he said that, we spread out into our usual positions. The ball came to me from Brent, after he had trapped it. The [running defender] was on me a little bit quicker than I expected, and in that split second, I decided to hit the ball. I had been thinking ‘flick it, flick it, flick it’, but then he was too close, so then I’m thinking ‘I’m going to have to hit this’. I connected pretty well, just missing his foot by a centimetre or so, then in between the keeper’s pads, up into the goal and that was it, celebration time!”

And what a celebration it was! A huge moment for you and your country. Can you tell us what it felt like to score the winning goal in an Olympic final?
Jamie Dwyer: “It’s quite hard to explain. One of the words that comes is relief. You feel relieved that you’ve put in all this work, from aged 13 sitting at home watching tape after tape of the Australian team, or the Germans, or the Dutch, Then I’d go out in the back yard and practise. After all that, you feel sort of relieved that you have got your dream, your end goal. The biggest goal you could ever achieve is to win an Olympic Games gold medal. To do it, that feeling is relieved and happy, not just for you but for your team-mates and for all the Australian players that have played previously and didn’t get to achieve what we achieved. It was for them, it was for my family, it was for my friends. All the commitments that I’d made, and all of my mate’s commitments. It’s just a really hard thing to explain. But in the end, it was what I had dreamed of when I was a little kid practising, and it came true, so it was an amazing feeling.”