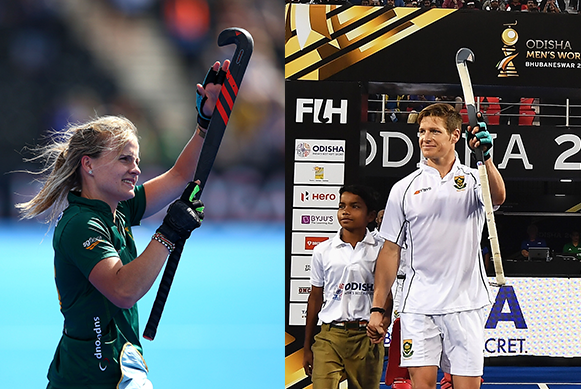 After the disappointment of being denied a place at Rio 2016 despite winning their respective continental championships, South Africa’s women and men make a welcome return to the Olympic fold for Tokyo 2020.

South Africa’s women have a staggering record in the Africa Cup of Nations continental championship. Following Zimbabwe’s title success at the inaugural event in 1990, South Africa have won six successive Africa Cup of Nations events, their most recent being in Ismailia, Egypt in 2017. Additionally, they have also won all four of the African Olympic Qualifier competitions played since 2007, with the most recent being the 2019 competition on home soil in Stellenbosch to earn their ticket to Tokyo 2020.

South Africa men sealed their Tokyo berth by becoming African continental champions in 2019, with veteran defender Austin Smith playing a huge role in the success by finishing as competition top scorer by netting ten goals in five matches. The team has long been the dominant force in African hockey and will be determined to make a big impression in Tokyo.

In the latest of our Olympic Spotlight series, we chat to South Africa team captains Erin Hunter and Tim Drummond ahead of their respective campaigns at Tokyo 2020. The interview took place at the end of June.

Erin Hunter & Tim Drummond, captains of South Africa, thank you so much for talking to us! We are just weeks away from the start of the Olympic Games Tokyo 2020. It may have been delayed by a year due to the covid-19 global health pandemic, but your squads are finalised and it is so nearly here. Starting with you, Erin, how are you and your team feeling?
Erin Hunter: “At the moment, everyone is just full of excitement and raring to go. I think with the Games being postponed and all the uncertainty that covid has brought South Africa and the rest of the world, we are really excited to have something to look forward to, something exciting in our calendar, being the light at the end of the tunnel of a dark and stormy year-and-a-half. So full of excitement, raring to go and cannot wait to get on the plane to get over there.”

Same question to you, Tim – it’s been a long time coming!
Tim Drummond: “Erin nailed it, she hit it on the head. It’s incredibly exciting, something we have all been waiting a long time for. Just being in camp now with the squad, it is great to be together, to train and play games together. I’m sure, just like every athlete, we are all desperate to get these Games underway.”

Tim, this will be your second Olympics, have participated at London 2012 – we know that Rio 2016 didn’t happen for reasons beyond your control. What does competing at the Olympic Games, representing your country, mean to you?
Tim Drummond: “It is a very special event for every athlete, but especially hockey players because it is the pinnacle of our sport. We know that every team there is one of the best teams in the world, and you want to play the best teams. It is an event that you want to be part of because you are testing yourself. The team really gets a good challenge every single game.”

Same question to you Erin.  After the disappointment of Rio, you must be incredibly proud about captain the team at Tokyo 2020, getting that chance to compete on the greatest sporting stage, which is also your debut Olympics.
Erin Hunter: “It is such a privilege, not only to represent South Africa, but to also represent and lead the team. I’m extremely excited. I think for any sports person in the world, the Olympics is the pinnacle event that you dream of going to, so to finally get that opportunity is unbelievable. Having not been sent in 2016, I think it makes 2020 that much more exciting, an even bigger event for me and my team.”

In Tokyo, the focus will be all about getting out of those tough looking pools and into the quarter-finals. Erin, the women are in Pool A alongside the World and European champions the Netherlands, Olympic champions Great Britain, Germany, India and Ireland, the world cup silver medallists of 2018, who you start your campaign against on 24 July. It will be a challenge, but one I’m sure you and your team will meet head-on.
Erin Hunter: “Yes, definitely. Everyone says that we are in a tough pool, but if you go and look at the other pool, it is just as tough. I think that is the beauty of the Olympics, as it is the best of the best. We know that we are going there to compete with the best of the best, and that is exactly what we plan to do. Being the lowest ranked team there, we know that we are considered the underdogs, but we are trying to use that to our advantage. We are going to give it our all in every single game, no matter who the opposition is. Hopefully we can stamp our mark in international hockey and make a name for ourselves.”

And Tim, you guys face reigning World champions Belgium, European champions the Netherlands, Germany, Great Britain and Canada in Pool B. Your first match is against Great Britain, on 24th July. What are your thoughts about the pool?
Tim Drummond: “It is a very tough pool, but the other pool is also extremely difficult. We know some of those teams in the other pool are quite unpredictable. The teams in our pool are mainly European countries, so we have done a lot of work on them – fortunately we have a lot of video footage from them [competing at] the Euros, which took place last month. Every game is tough, we know that. We are definitely putting in the work now to prepare ourselves for every single game at the Olympics. It is exciting, and it is a huge privilege to be able to face these top international teams.”

How have the preparations been for your teams? It cannot have been an easy build-up towards Tokyo. We’ll start with you, Tim.
Tim Drummond: “It has definitely been a challenge. We haven’t been together as this Olympic group for probably a year-and-a-half, but we know we are not going to use that as an excuse. We’ve had a really good ten days on training camp at the moment, and we’ve got another five days to go so we’ve got to make sure we maximise every minute together, whether that is on the pitch or culturally, off the pitch and video work, analysis of opposition, that kind of thing. Every team has their challenges and ours are slightly different, but we know that when that first whistle goes against GB in our first game, there will be no-one making comments about the challenges in our preparation. We’ve got to make sure we perform when the time comes. I fully back the guys in the squad and the coaching staff; we are really looking forward to this Olympics.”

And Erin, how have the preparations been for the South Africa women’s team?
Erin Hunter: “Pretty much the same as probably every other team in terms of the word ‘disrupted’. Obviously covid has thrown a huge spanner in the works, as we did have plans to get a lot of international competition before the Games. Unfortunately, we’ve accepted that is not going to take place. However, as Tim said, we are not going to use that as an excuse. We are trying to control what we can control and make the best of what we have. We’ve been fortunate to be able to spend every second weekend together as a squad for the majority of this year, so we have been trying to be creative in our preparation. It may not be the preparation that we wanted, but it has definitely been great preparation and I think it will put us in good stead for the Games.”