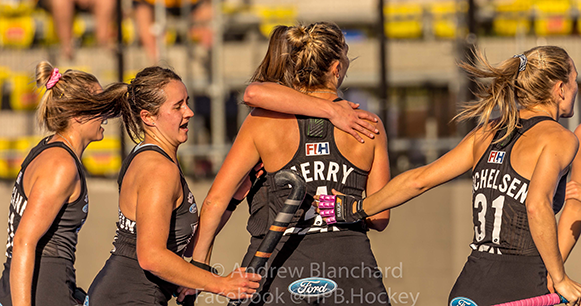 New Zealand (World Ranking:6) women defied history and the world rankings to win the 2019 Oceania Cup and a coveted ticket to the Olympic Games Tokyo 2020 after they drew their final nail-biting match with Australia (WR:2) to win the overall contest on goals scored.

In the men’s competition, Australia (WR:1) were dominant in the first and third game of the competition, winning 4-1 and 3-0. It wasn’t all plain sailing however as New Zealand (WR:8) made them work for the win with a strong showing in the second match of three, holding the world number one side to a draw and keeping their hopes alive ahead of the final day of play.

There was certainly no doubting the significance of this competition. Who won the two golden tickets to the Olympic Games Tokyo 2020 all came down to three matches played over an intense four day period at the Oceania Cup. Australia and New Zealand faced off in both the men’s and women’s competition in Rockhampton, Queensland, knowing that this was an all or nothing contest.

If there was intense pressure, host nation and world number one side Australia didn’t show it in the opening men’s match. Tom Craig gave the Kookaburras a lead within five minutes of the start and the team continued to build the lead as Tim Brand, Blake Govers and Flynn Ogilvie all got onto the scoresheet. New Zealand (WR:8) were unable to find an answer in that opening encounter.

The results were reversed in the first of three women’s matches as New Zealand (WR:6) ignored the rankings and current form to charge to a 3-1 win and a 1-0 overall lead. The goals, from Megan Hull, Amy Robinson and Stacey Michelesen, were enough to move Graham Shaw’s team into a confident, leading position.

The second round of matches saw New Zealand men regroup and the resulting 2-2 draw was a sign of the Black Stick’s resilience. Australia took a 2-0 lead in the first half, with goals from Tom Wickham and Govers and must have been thinking they were on their way to Tokyo with an unassailable lead.

New Zealand, though, had other ideas and first Jacob Smith and then Kane Russell dragged their team back into the contest. The results meant everything came down to the final day of action.

And so to the third round. New Zealand women needed a win or a draw; the Hockeyroos needed a win. Australia men were in the most comfortable position, needing just a draw to secure top spot but New Zealand had kept the door open – although a 4-0 win or better against the world number one side was a big ask even for this resilient team.

The women’s match was a classic encounter. New Zealand’s head coach Graham Shaw admitted it was a game that was “ugly at times”.

Australia took the lead early in the game through a fierce rebounded shot from Mariah Williams in the second minute of play. It was still 1-0 with just five minutes left on the clock and the home crowd could have been forgiven for thinking their side had done enough. But New Zealand dug deep, driven on by Megan Hull and the ever-impressive Stacey Michelesen.

The pressure paid off as New Zealand won a penalty corner. Olivia Merry, who has been in a rich vein of form in front of goal of late, made no mistake as she shot home to give her team the goal they needed.

“What a feeling,” said head coach Graham Shaw. “Today wasn’t our best performance but we got the job done and I am so happy to know we have made it.”

In the final men's game, Australia played with supreme confidence and raced to a 2-0 lead by the end of the first quarter. The goals came from Tim Brand and Blake Govers. New Zealand dug deep and defended well but, in truth, they never looked like breaching the Kookaburra's wall. Their cause wasn't helped when two players received yellow cards in the final minutes of the game, meaning the Black Sticks were down to nine players. A third goal was added by Govers in the final minute of play.

Captain of Australia Aran Zalewski said: "It's not every day you get to qualify for the Olympics. We put ourselves under pressure with the draw yesterday but we came back with a good performance today. We should have scored a few more from the penalty corners we had but we will take that win."

The results mean that Australia men join Japan, Argentina, Belgium and South Africa as the nations currently qualified for the Olympic Games Tokyo 2020.

In the women’s event, New Zealand join Japan, Netherlands, Argentina and South Africa as the teams qualified to compete next year.

Australia women and New Zealand men will now learn who they face in the upcoming FIH Olympic Qualifiers.

New Zealand’s win is their first Oceania Cup victory since 2011, while for Australia men, this is the 24th win since the competition began 97 years ago.