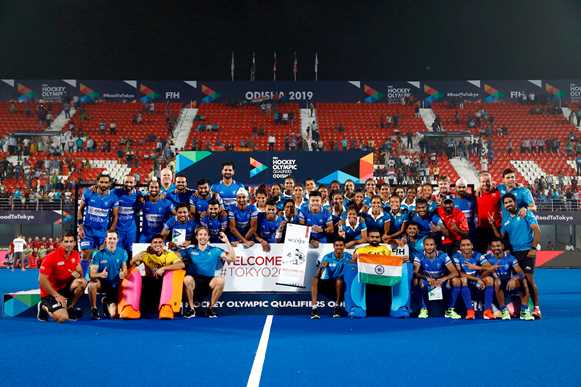 India's men and women will both participate in the Olympic Games 2020. Image copyright: Hockey India

India’s men’s and women’s teams both secured qualification for the Olympic Games Tokyo 2020 on a busy day of action in the FIH Hockey Olympic qualifiers.

India's women came into their second leg match against USA with what looked like an unassailable 5-1 advantage, but a brilliant first half performance saw the Americans score four times without reply to level the aggregate score at 5-5 against the hosts. However, a captain's goal from Rani Rampal in the final quarter gave India a 6-5 aggregate victory to break the hearts of a USA team that produced a truly monumental away performance in Bhubaneswar’s Kalinga Stadium.

India's men ensured it was a double home celebration in Bhubaneswar by overpowering Russia 7-1 in their second leg match, a result which gave them an 11-3 victory on aggregate. The home favourites conceded inside the opening 25 seconds as Russia closed the aggregate score-line to 4-3, but India moved through the gears to claim an emphatic win and seal their place at Tokyo 2020.

Six first-leg matches also took place on Saturday, with New Zealand’s men earning a narrow 3-2 win over Korea in Stratford while the men’s and women’s teams of both Germany and Great Britain all claimed what could vital victories. The women of Ireland and Canada were also in action, playing out a draw at the Energia Park in Dublin to leave the tie finely balanced.

Stratford (NZL) – Men: New Zealand 3, Korea 2 (Match 1 of 2)
A thrilling first leg fixture saw New Zealand (FIH World Ranking: 9) twice lead thanks to two goals from Stephen Jenness only for the visitors Korea (WR:16) to draw level on each occasion through Lee Namyong's open play effort and a penalty stroke from Jang Jonghyun. The teams were all square at 2-2 going into the fourth and final quarter before the Black Sticks snatched a winner, with Simon Child firing home a field goal to give the hosts a slender advantage over Korea going into the second leg on Sunday.
For more information on this match please visit the Live reporting page by clicking here.

Bhubaneswar (IND) – Women: India 1, USA 4 (India win 6-5 on aggregate)
A remarkable first half performance saw USA (WR:13) cancel out India's (WR:9) 5-1 aggregate lead by scoring four times without reply to tie the match at half-time. Amanda Magadan netted two superb goals with team captain Kathleen Sharkey and Alyssa Parker also on target as the visiting Americans overwhelmed their opponents with a scintillating display. Following some half-time words of guidance from head coach Sjoerd Marijne, India were vastly improved after the break as both teams chased the goal that would send them to Tokyo. The winner arrived 12 minutes from time thanks to a terrific finish from India captain Rani Rampal, who fired high into the net after a goal-mouth scramble. USA almost pulled off a miracle in Bhubaneswar, but it is India who claim the ticket to next year's Olympiad.
For more information on this match please visit the Live reporting page by clicking here.

London (ENG) - Women: Great Britain 3, Chile 0 (Match 1 of 2)
A goalless first half saw both Great Britain (WR:5) and Chile (WR:18) probing and testing each other’s defences. GB, the defending Olympic champions, broke the deadlock early in the second half with a well-taken goal from Isabelle Petter. This was followed by goals from Hannah Martin and Anna Toman, two players who put in excellent performances in this first of two matches. Chile made their own chances, including several penalty corner attempts, and captain Camila Caram said her team would be looking to capitalise on any scoring opportunity in the second leg tomorrow (Sunday 3 November).
For more information on this match please visit the live reporting link by clicking here.

Bhubaneswar (IND) – Men: India 7, Russia 1 (India win 11-3 on aggregate)
Home favourites India (WR:5) endured a difficult start to their second leg match, with Alexey Sobolevskiy scoring just 25 seconds into the contest and moving Russia (WR:22) to within one goal of their opponents. Despite the early set-back and their aggregate lead cut to 4-3, India bounced back in style to overpower the Russians and secure their berth at Tokyo 2020. The hosts scored three times in the second quarter thanks to Lalit Upadhyay – who was celebrating his 100th international cap today – and a double from Akashdeep Singh, putting the hosts into a 3-1 lead on the night and 7-3 on aggregate. The Russian goal was breached on four occasions after half time, with Nilakanta Sharma, Rupinder Singh (2) and Amit Rohidas confirming that the eight-times Olympic champions will indeed be present at Tokyo 2020.
For more information on this match please visit the live reporting link by clicking here.

Mönchengladbach (GER) – Women: Germany 2, Italy 0 (Match 1 of 2)
Germany (WR:4) came into their all-European encounter with Italy (WR:17) as heavy favourites but needed to show a degree of patience against a side that defended valiantly. Die Danas were guilty of missing a host of penalty corner chances before eventually getting the opening goal through Hannah Gablac, who fired home at the second attempt following good build-up play from Nike Lorenz and Cecile Pieper. Lorenz netted Germany's second goal in the final minute, converting her team's 11th penalty corner of the match. Italy will feel rightly buoyed by today's performance and know that Germany's two-goal advantage is not insurmountable.
For more information on this match please visit the live reporting link by clicking here.

London (ENG) - Men: Great Britain 4, Malaysia 1 (Match 1 of 2)
The opening half of this match saw Malaysia (WR:11) take an early 1-0 lead and dominate the proceedings with their speedy attack and great possessive play. However, Great Britain (WR:7) weathered the storm and kept the deficit to just the one goal. The second half was a reversal of form, with Great Britain playing attacking, fast-paced hockey. Goals for Sam Ward, Phil Roper, Alan Forsyth and James Gall puts Great Britain 4-1 up going into the second leg on Sunday.
For more information on this match please visit the live reporting link by clicking here.

Mönchengladbach (GER) – Men: Germany 5, Austria 0 (Match 1 of 2)
Following a cagey opening, Germany (WR:6) took a 1-0 lead against Austria (WR:20) with their first penalty corner thanks to a low drag-flick from Lukas Windfeder before two goals in the second quarter put Die Honamas firmly in control. Constantin Staib showed quick hands to score from close range before a stunning solo effort from Christopher Rühr - who ran half the length of the field before producing an emphatic finish - established a 3-0 lead at half time. Germany dominated throughout the third and fourth quarters, with Florian Fuchs and Timur Oruz completing the scoring as the four times Olympic gold medallists took complete control of the tie.
For more information on this match please visit the live reporting link by clicking here.

Dublin (IRL) – Women: Ireland 0, Canada 0 (Match 1 of 2)
Two evenly matched teams played out the first goalless draw of the FIH Hockey Olympic Qualifiers in front of a rain-sodden but vociferous crowd in Dublin. Ireland (WR:8) had the major share of possession and more scoring chances but Canada (WR:15) weathered the attacks and created their own opportunities in the second half. Both team captains, Katie Mullan of Ireland and Kate Wright of Canada have promised their teams have plans to break the deadlock in tomorrow's crucial deciding match.
For more information on this match please visit the live reporting link by clicking here.