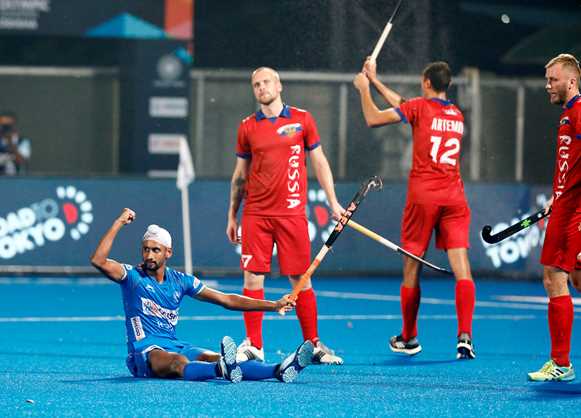 In the first match of the day, India’s women (FIH World Ranking: 9) claimed an impressive 5-1 triumph in against USA (WR:13), a result that gives the Eves a commanding four-goal advantage going into tomorrow's second leg.

India’s men (WR:5), the eight times Olympic champions, were given a stern test by Russia (WR:22) in the day’s second match before eventually securing a 4-2 victory. The Russians were excellent against the hosts, but will go into tomorrow's second leg with a two goal deficit.

Bhubaneswar (IND) – Women: India 5, USA 1 (Match 1 of 2)
The women of India and USA were the first teams to take to the field at the Kalinga Stadium, and it was the Americans who were largely dominant in the first two quarters of the match. However, it was India’s Eves who found themselves ahead at the break when Lilima Minz scored from an improvised penalty corner. While the hosts were perhaps fortunate to have the half-time lead, the quality of their performance in the third and fourth quarters ensured that they were fully deserving winners of this contest. Sharmila Devi, Gurjit Kaur (2) and Navneet Kaur all found the target as the India dominated proceedings, before Erin Matson's late consolation goal gave USA a small glimmer of hope going into tomorrow’s second leg.
More information on the match can be found on the Live Reporting link by clicking here.

Bhubaneswar (IND) – Men: India 4, Russia 2 (Match 1 of 2)
With home advantage and sitting fully 17 places above Russia in the FIH World Rankings, it came as little surprise that India's men started this contest as heavy favourites. However, it proved to be far from straight-forward for the hosts, who were made to dig deep to secure a 4-2 victory against an opponent that gave a terrific account of themselves. India took the lead in the first quarter thanks to a penalty stroke from Harmanpreet Singh after team captain Manpreet Singh had been fouled, but Russia hit back when an overhead pass was collected and emphatically dispatched by Andrey Kuraev. Russia had good chances to move ahead before Mandeep Singh put India into a 2-1 lead at half time. Fourth quarter goals from SV Sunil and a second for Mandeep gave the hosts a 4-1 advantage, but Semen Matkovskiy’s late penalty corner keeps Russia’s interest in this two-legged qualifier very much alive.
More information on the match can be found on the Live Reporting link by clicking here.